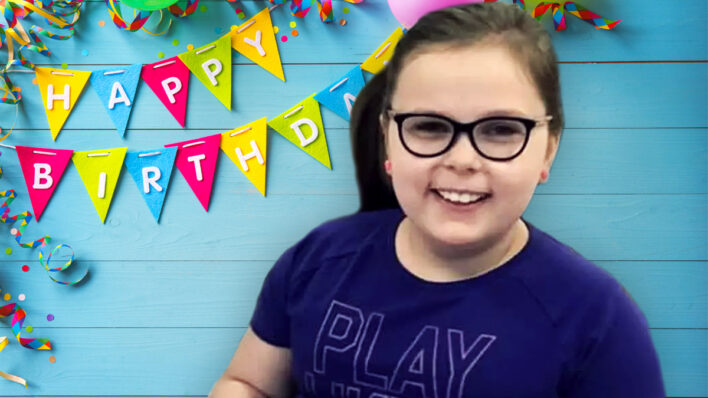 One third-grader works hard every year to ensure that every boy and girl feels special on their birthday.
By Amber Dowling    March 29, 2022

One third-grader works hard every year to ensure that every boy and girl feels special on their birthday.

You’re never too young to start giving back, which one little girl proved with her big, birthday-loving heart. After Bella Smith learned not everyone in her school was able to celebrate their special day, she got motivated and decided to do something about it.

It all began in 2017 when Bella was seven years old. At the time, one of her fellow students at Wyan-Pine Grove Elementary in Kentucky explained to her that his family couldn’t afford to have a birthday party; not even a small one.

“The school she attends is a Title 1 school, which means 80 percent of the population here is impoverished – so we have students that struggle with a lot of things,” Smith’s mom, Marlana Evans, who teaches at Bella’s school, told Good Morning America.

Eighty per cent of the population here is impoverished – so we have students that struggle with a lot of things.

“I just kind of felt down. I went from happy just to kind of miserable,” Bella also told Lex 18 news.

That’s when Bella’s Birthday Box, the girl’s own little charitable side-hustle, was born. The school had a backpack club that sent home items to students in need, so Bella and Marlana did their own version. Birthday boxes include everything a kid needs to throw a proper birthday with their family: cake mix, frosting, sprinkles, balloons, and other decorations.

According to the family, these successful boxes are stocked thanks to the generosity of the community. And on each of her own birthdays, Bella asks others to donate items to the boxes instead of gifting her presents. Those boxes are then distributed through the school’s Family Resource Centre. In March 2019, when the story went viral, Bella had already packed 65 boxes. By April, she had more than doubled it to 140 boxes.

“Not all people have as much as I do. I want to share a little bit of my birthday with them,” Bella told Lex 18. “She’s always had a heart for people and always been extremely kind and helpful toward other people,” her mom added.

Not all people have as much as I do. I want to share a little bit of my birthday with them.

By October 2019, Betty Crocker had also heard about the story and decided to help out. The company sent Bella a gift basket and a donation of cake mix and icing to help out with the next batch of boxes. By the end of the year, Bella’s story was also featured in an anthology of stories about kind kids called Unselfish Kids.

“I thank God for the opportunity for letting me be able to shine my light and show that I love my neighbor,” Bella explained to GMA.

It’s clear from Bella’s story that not only did she help many kids celebrate birthdays they may not have otherwise been able to, but she inspired other people to give back as well. Her selfless act of asking for donations on her birthday instead of presents is exemplary generosity for someone so young, and it proves it’s never too early (or late!) to start giving back.

Sure, not everyone has time to help out by making donation boxes for kids, families, or people in need, but doing things like donating items to these boxes or even just asking how you can help can sometimes be the difference others need in their lives.

Local food banks or food program are also always looking for donations or cash donations to help them secure the fresh things they need at their drop-in centres. Have a really busy schedule? The next time you’re at a grocery store, throw a few extra non-perishable items in your cart and place them in the donation bins at the end of the cashier aisles on your way out.

As the old saying goes, every little bit counts.

make sure to give back
“Remember that the happiest people are not those getting more, but those giving more.” – H. Jackson Brown Jr.
Tags
Share
← Prev Post Next Post →