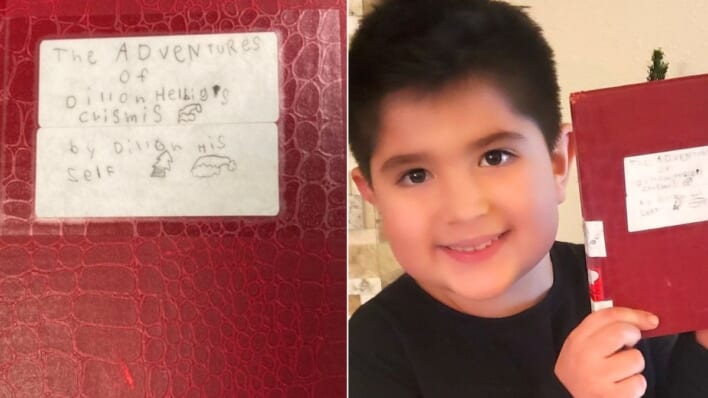 A young boy from Idaho is on his way to becoming a bestselling author after sneaking his own self-written book into his local library.
By Ty Jay    September 21, 2022

A young boy from Idaho is on his way to becoming a bestselling author after sneaking his own self-written book into his local library.

An 8-year-old boy had his sights set on getting his self-written book into his local library and with a little bit of hustle and finesse, he got it done.

You’ve got to admire the young lad’s dedication.

Dillon Helbig is a young self-taught author from Idaho. His first “published” book has become a smash hit in the small town of Boise. For all you entrepreneurial hopefuls, you might want to take a page out of young Dillon’s book.

(Just not literally, he worked hard on this…)

Besides being a budding author extraordinaire, it sounds like young Dillon is also good at executing plans. While on a trip to the Lake Hazel Branch’s Ada Community Library with his grandmother, Dillon took his shot.

He placed the only copy of his handwritten 88-page book on a shelf in the library’s fiction section when nobody was looking.

RELATED: Neighborhood Kids See a Boy Struggling to Ride a Bike – His Mom Catches Them Doing the Unbelievable

While explaining his adventures to a local television station, Dillon said there were a lot of librarians that he had to “sneak past.” The young author says he covered up part of the book with his body and “just snuck it in.” He admitted he’s “always sneaky, like how I get chocolate.”

Dillon’s book is a work of fiction. His novel tells the story of how the character, Dillon, began decorating his Christmas tree during the holidays before it exploded, magically transporting him back in time to the year 1621.

The time travel is a reference to when Thanksgiving was first celebrated in the United States — a date that Dillon the author fact-checked with his mother while the book was being written.

Dillon’s book, titled “The Adventures of Dillon Helbig’s Crismis” was written by hand over a four-day period, with all illustrations drawn by young Dillon, who authored the book under his pen name, “Dillon Helbig His Self.”

What’s equally inspiring is what the Ada Community Library did to make “The Adventures of Dillon Helbig’s Crismis” a hot commodity for library goers.

Instead of playing off Dillon’s book as a cute move, the Lake Hazel Branch Ada Community Library went the extra mile — they added it to their collection.

“Imagine our surprise when Dillon’s mom called to tell us that her son had authored an entire book, shelved it at the Lake Hazel Branch, then announced to his family later that he had written a book and it could be checked out at the library,” announced the library’s Facebook page.

On its Facebook page, the library continued to praise the full-colour illustrations, spine label, and in-depth 88-page story.

What’s more, the library also crowned “The Adventures of Dillon Helbig’s Crismis” as the 2021 Whoodini Award for Best Young Novelist and Dillon agreed to donate his first edition book to the library’s official catalog.

The library says 135 people had joined the waitlist to rent it out, meaning the wait time (if everyone kept it for the two week maximum) is about five years.

Strive and Hustle Has No Age Limit

The Lake Hazel Branch Ada Community Library says its in discussions with the Helbig family about creating a digital copy of the book so children and parents can download it and add it to e-readers.

Dillon says he’s already working on his book, “The Jacket Eating Closet,” which he claims is based on real-life events from his time in kindergarten.

Whether you’re 8 or going on 80, it’s never too early or late to strive toward your dreams. Don’t let anyone tell you what you can or can’t do. Be daring, and you might find your own library to reward that bravery.