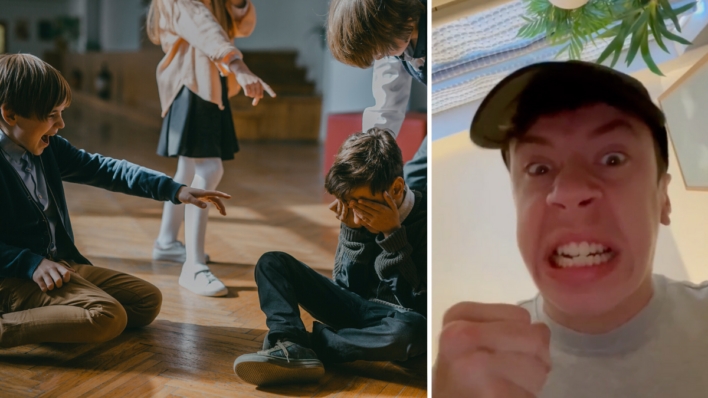 A TikTok star and Twitch streamer helped boost the confidence of a young boy who admitted he was getting bullied at school for being bad at the video game “Call of Duty: Warzone.”
By Ty Jay    September 16, 2022

A TikTok star and Twitch streamer helped boost the confidence of a young boy who admitted he was getting bullied at school for being bad at the video game “Call of Duty: Warzone.”

TikTok has an infinite amount of scrollable content and every so often, it’ll tug at your heartstrings.

A young boy fell into a chance encounter with Twitch streamer and popular TikToker Ryan Stoker, who took the little one under his wings, boosted his confidence, and gave him a virtual mission he’ll never forget.

Why One Young Boy Was Bullied at School

Stoker was streaming himself playing Call of Duty: Warzone on Twitch where he has more than 91,000 followers. He came across the young Paul Jez who admitted he had never won a Warzone game before and was getting bullied at school as a result of his only-losing record.

“Have you ever got a win before bro?” asked Stoker, to which the young boy replied, “No.” The popular TikToker and Twitch streamer then took him under his wings: “follow me bro, follow me.”

RELATED: Struggling Homeless Woman Uploads Videos on TikTok – What a Stranger Does Next Changes Her Life

After claiming that people pick on him at school because he “just started the game” and is “bad,” Stoker offered a virtual glimmer of hope to his new young teammate, “I’ve got you little man!”

Paul’s path towards victory wasn’t an easy one. In the now-viral TikTok video, you can hear Stoker yell in disappointment as the younger Call of Duty player was virtually defeated in round one.

The boy asked Stoker to add him so they could play again in the future but Stoker wasn’t going to go down without a fight.

Paul politely asked Stoker if he could stick near him and mirroring everyone’s sentiments, the Twitcher said, “This is the cutest kid ever.”

As the stream was happening live, Paul realized he was being digitally coached by the popular gamer. “Are you the guy from TikTok? How many — what is it called? — followers do you have?”

Come on, how cute is he? He forgot the word for followers! Clearly, he has more important priorities — like getting his first-ever Warzone win.

After revealing he has more than one million followers, Paul revealed, “I only have 72.”

“I’m not ending the stream until we get this guy a win,” proclaimed Stoker, after some murky play including the dreaded Call of Duty gas.

Thanks to Stoker’s kindness and a bit of luck, Paul exclaimed he had achieved “my first victory!”

The new friends agreed to add each other and Paul blurted out, “I’m gonna cry.”

Soon after the live stream, Stoker edited the footage into a condensed TikTok where it blew up, gobbling up more than 7 million views and over 1.5 million likes.

Ryan Stoker isn’t the only internet force who can help to boost Paul’s confidence. You can follow the newly-crowned Warzone winner right here, who now has over 56,000 followers on the platform, mostly thanks to a big-time assist from good-guy Stoker.

Young Boy Breaks Down During a School Rugby Game – Then, Another Player Does Something Unexpected