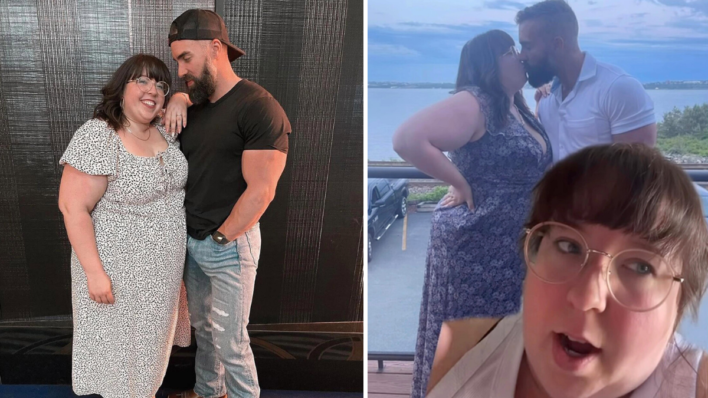 TikTok star Alicia Mccarvell is destigmatizing people’s conceptions of a healthy body, one post at a time.
By Amber Dowling    July 13, 2022

TikTok star Alicia Mccarvell is destigmatizing people’s conceptions of a healthy body, one post at a time.

Everyone is worth more than the weight they carry. Yet, how many of us have grown up placing value on people based on their looks rather than their personalities? It’s a lesson many need to unlearn, but that’s where TikTok star Alicia Mccarvell is changing the conversation, one self-loving post at a time.

The Canadian TikTok user has a following of 5.4 million people, many of whom follow her for her fun and authentic personality. The Halifax native posts giggle-inducing videos like her and her husband working out together, trips to the grocery store, or recreating viral trends.

How A Woman Addressed The Rude Comments On Her TikTok Video

Another reason Alicia has amassed so many followers is her unwavering stance on body positivity, something she often addresses when people question her relationship with her husband, Scott. Scott is fit and although the pair are clearly very much in love in the videos, Alicia says some users have commented that the couple just “doesn’t make sense” because they happen to have different-sized bodies.

Earlier this year, Alicia addressed the backlash in a video after she received a ton of comments on a transformation video based on the trend of couples getting ready together. “This is a simple transition video of me and my husband… this is not unlike what all kinds of couples do on this app,” she said. “My video went viral and we all know why. It’s because by beauty standards, we don’t make sense. The world looks at us and immediately values Scott more than me.”

Alicia revealed many people try to explain her relationship by adding to her side of the equation (she must be rich, she couldn’t have been fat when they met) or by decreasing his side (he has a fat fetish, he must be gay).

“We’ve been made to believe that somebody who is physically fit like Scott could never in a million years be in love with or compatible with a fat woman,” she continued.

The world has literally taught us that we have to value our worth [based] on our bodies.

In the video, Alicia also revealed that skinny women will slide into her husband’s DMs and tell him they should be with someone like them. “[One woman] was thin and by beauty standards a 10 out of 10,” she said. “Here’s the thing though. Me, telling myself for the majority of our relationship that I’m not worthy of his love because of my body is the exact same thing as this thin woman telling him that she is worthy of his love because of her body. I’m undervaluing myself and she is overvaluing herself. We’ve both been made to believe that our value lies in our body.”

Alicia then revealed many people ask her if she gets jealous when women act that way toward her husband. She explained she doesn’t because she knows that her husband values more than looks in their relationship and that’s all these women are offering.

“They’re leading with their body first. On the scale of what my husband values, how well my body fits into the beauty standards is not on the top of his list,” she said.

He values my humor and my commitment and my love and my caring heart. None of these things that he values about me change if my body changes.

Why It Is Integral To Unlearn Trash Beauty Standards

let’s address the trash beauty standards in the room ||••

Alicia wrapped her video with the most important message of all: Nobody’s worth should be directly correlated to how they look. It’s a lesson she and her husband have learned, and she hopes more people will take the steps to learn going forward as well.

“People’s values don’t lay in how well their bodies fit into society’s trash beauty standards,” she concluded. “And I get it. If this is the way you think it’s the way you’ve been taught. However, it is your responsibility to unlearn it.”

It’s a good reminder that society in general needs to unlearn a few things. Skinny bodies don’t always equal healthy bodies, and there’s so much more to anyone than their looks. If you want to work on the way you view the world, a good way to start is by changing the way we speak to ourselves about our own bodies — both internally and externally.

Rather than placing value on the number on a scale, place value on kindness, humor, empathy, generosity, and other traits that make you a good human being. Love yourself and others for these things deep down, and the world at large may suddenly seem a lot rosier as a result.

every body is beautiful
“Life is so much more beautiful and complex than a number on a scale.” — Tess Munster
Tags
Share
← Prev Post Next Post →