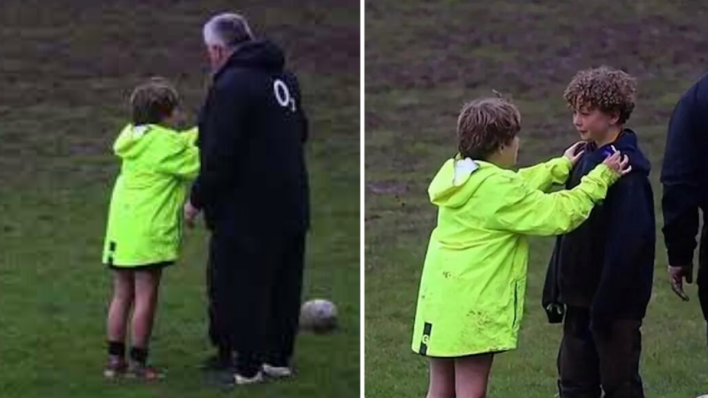 Young Boy Breaks Down During a School Rugby Game – Then, Another Player Does Something Unexpected

One little boy showed the importance of sportsmanship during a school game of rugby.
By Lindsey Staub    September 9, 2022

One little boy showed the importance of sportsmanship during a school game of rugby.

England’s Sedbergh School in the town of Sedbergh in Cumbria shared a video on their Instagram account showing the power of friendship and sportsmanship.

In mid-April, on the school’s Instagram account shared a video of two young boys where one was comforting the other during a game of rugby.

What One Young Boy Told His Teammate During a Rugby Game

The clip is only thirty-two seconds, but it’s still powerful: The video shows a young boy crying to his coach during a game.

“Everyone’s older than me, everyone’s bigger than me,” the boy says in the clip.

The coach is trying to cheer the boy up to no avail. Finally, the young boy’s teammate comes over to offer his own pep talk.

After the speech, the boys embrace.

“Best teammate ever,” the coach says.

Finally, the two boys and their coach walk off screen to rejoin the game.

The video showing the kind exchange has been viewed more than 50,000 times on social media.  “So beautiful to see such incredible comradeship, support and encouragement & at such a tender age. Utter wisdom. Utter kindness. Kudos to both the kids and the coach,” commented one user.

Though insecurity is common in everyone, it’s clearest in children as they grapple over their height, their grades, their skills while growing up. Friends are a great source to help you through negative self-views like how this boy helped his friend during the rugby game.

The teammate encouraged his friend and the two were able to finish the game, showing us that sometimes all we need to keep going is a little pep talk from a friend.