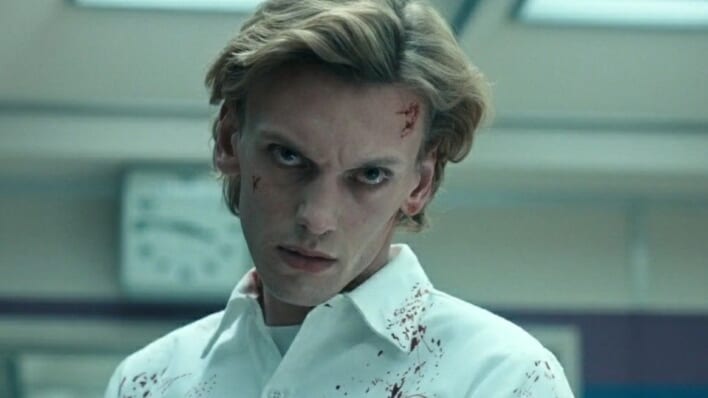 From playing a vampire to a Shadowhunter, Jamie Campbell Bower knows how to take on a challenge. In reality, he’s faced far worse trials than playing Vecna — namely addiction.
By Mikaela Lucido    September 8, 2022

From playing a vampire to a Shadowhunter, Jamie Campbell Bower knows how to take on a challenge. In reality, he’s faced far worse trials than playing Vecna — namely addiction.

Recognizable for his roles in Stranger Things, the Twilight saga, and The Mortal Instruments, Jamie Campbell Bower is as multifaceted as they come. It takes no expert to see that he “has the range.” But acting isn’t his only admirable trait (no, we’re not talking about his Vecna voice).

The English actor recently shared a powerful reminder about his sobriety journey: “We are all works in progress.”

Born in London and raised in Petersfield, Hampshire, Bower grew up surrounded by music. Having both parents in the music industry, the 33-year-old performed at the local youth theater with his family’s support. Though initially drawn to the stage, he soon turned his attention to cinema.

In 2007, Bower landed his first feature film playing Anthony Hope in Tim Burton’s Sweeney Todd: The Demon Barber of Fleet Street. Though the film was a hit, Anthony Hope didn’t quite skyrocket his career. But after a stint of unsuccessful auditions, Bower wound up in Harry Potter and the Deathly Hallows. He made a brief appearance as Gellert Grindelwald (Dumbledore’s ex-boyfriend), then entered the Twilight saga as ruthless vampire Caius.

While he’s intimidating when called for, Jamie Campbell Bower is more than capable of leaning into his heroic side. Through the early 2010s, he played gallant King Arthur in Camelot and heartthrob Jace Wayland in The Mortal Instruments: City of Bones.

Between acting gigs, Bower also stayed linked to music, (in fact, until the pandemic, Bower was the frontman of punk rock band Counterfeit, despite having moved on from the band, he is releasing new songs under the name Jamie Bower).

Long before stepping foot on the Stranger Things set, Jamie Campbell Bower was talented as he was versatile. Though, like many celebrities striving for sobriety, he wrestled with himself backstage.

Bower Battled Addiction Behind The Scenes

At the start of his career, Bower was in his twenties. For many, your twenties is a season of immense personal growth. But on top of navigating this period, Bower was also dealing with the added pressures of being a burgeoning actor. And in late July 2022, he revealed another struggle altogether.

Bower shared his addiction story on Twitter, writing: “12 and a half years ago, I was in active addiction. Hurting myself and those around me who I loved the most. It got so bad that eventually I ended up in a hospital for mental health. I am now 7 1/2 years clean and sober.”

The Sweeney Todd actor went on to humbly admit to “many mistakes,” promising those struggling there’s a way to heal. “Each day is a chance to start again. Atone for mistakes and grow,” he encouraged readers. Bower concluded his tweet with gratitude for his sobriety and emphasized how we can always change for the better.

Seen by millions of followers and liked by thousands, Bower’s story made a huge impact in destigmatizing addiction. Many congratulated Bower for his transparency, some even being inspired to seek help for their own mental health. As a breakout star, his highly public self-reflection is noteworthy because his journey shows us anyone can grapple with addiction.

What’s Next for Jamie Campbell Bower? Stranger Things and Beyond

Going forward, Bower is sure to see much more support from his ever-growing fanbase via heartfelt tweets, tuning into his future acting projects, and streaming his music.

On August 12, 2022, the star released a music video for the song “I Am,” which unsurprisingly deals with duality. In the video, which already boasts over a million views, Bower acts as both an angel and devil. Clearly, his acting portfolio isn’t the only domain in which he’s mastered complexity.

Speaking with Wonderland on his Vecna performance, Bower confessed: “Art offers a sense of constant evolution, so I never want to get to the place where I’m comfortable. I always want to be pushing myself and pushing my boundaries.” And did he push those boundaries, eight hours to get the monstrous look alone is a feat in itself.

As Vecna, Jamie Campbell Bower served as Stranger Things’ metaphor for depression. He was a haunting, cruel, and true demon. Like Eddie Munson or Max Mayfield, we might run away or avoid our inner demons altogether. But Season 4 ultimately sees these characters learn the power of vulnerability. It’s this vulnerability that binds the team together to fight the Mind Flayer, paralleling Bower’s own bravery in speaking out about his path to sobriety.

Addiction and mental illness might feel as gargantuan as the Mind Flayer. Dealing with it is no easy task. Some days, it might feel suffocating. Isolating. That’s the thing about stories like Stranger Things or Bower’s. Amidst everything, stories inspire. They comfort us.

Jamie Campbell Bower’s story is one of many. But the simple fact he’s told it at all is uplifting — and it’s proof you’re never alone.