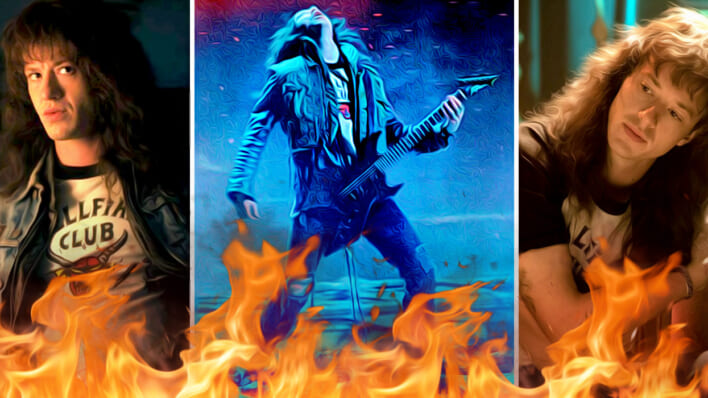 Stranger Things: There’s a Reason You Love Eddie Munson – And It Isn’t That Guitar Solo

From an electric monologue about high school conformity to birthing the meme of the summer (“Chrissy, wake up”), Eddie Munson will go down in Stranger Things history as one of the show’s most beloved characters — and for good reason.
By Mikaela Lucido    July 30, 2022

From an electric monologue about high school conformity to birthing the meme of the summer (“Chrissy, wake up”), Eddie Munson will go down in Stranger Things history as one of the show’s most beloved characters — and for good reason.

Of course, it would have been far too easy to go another route with this character. After all, Eddie was a metalhead and drug dealer, and his friendship now rivalled — and even threatened — the fan-favorite bromance between Dustin Henderson and Steve Harrington. Off the bat (pun unfortunate and unintended), viewers could have had another Billy Hargrove on their hands. Billy’s racism and abuse was chilling, but also, disconcertingly realistic. But it would have been reductive to alienate the misfit metal-obsessed nerd from audiences with similar behavior.

Thankfully, Eddie’s compassion, honest reluctance to deal with the supernatural chaos, and endless flirting with Hawkins’ best babysitter showed the world what Stranger Things has been highlighting all along: heroes come from the most unlikely of places.

Eddie Munson Defies Small Town Prejudice – And Our Own

Like most of Hawkins, the main characters initially doubt Eddie’s innocence when it comes to the Vecna murders. They learn in no time how wrong they were, though. Hawkins might judge him, but those who truly understand Eddie Munson — like the Hellfire Club and his Uncle Wayne — know better.

Eddie “The Freak” Munson is an outcast through and through, which is why the townspeople paint him as a satanic cult leader with loose morals. Even before the murders, fellow classmates and peers poke fun at his interests. In some ways, his story mirrors Winona Ryder’s — sometimes, no matter what you’ve done, you can never be enough for people.

At his core, Eddie resonates with so many because he’s so different.

A metal fan in the ‘80s, you might expect him to be chauvinistic or homophobic, but he’s far from it. Within minutes of dismissing Erica Sinclair as a worthy player in his campaign, he accepts her. Eddie immediately defers to Nancy Wheeler’s leadership. He is deeply committed to art but considerate. He swears by nonconformity but stands by community.

Subverting expectations everywhere he goes, Eddie is a safe space for the outcast in all of us.

It makes perfect sense why the internet latched on to Eddie Munson.

While his interactions with the tragic Chrissy Cunningham morphed into a catchy tune that is stuck in even actor Joseph Quinn’s head, his concern over the cheerleader undeniably drew audiences into his warm gaze. Early on, he has no clue what demons Chrissy faces, but TikTok user and actor Brittany Grove’s analysis of Joseph Quinn’s body language shows how, in a single scene, Eddie effortlessly puts Chrissy at ease. That is, until Eddie soon witnesses Chrissy’s brutal murder and runs away.

Many fans noted how writers foreshadowed his tendency to run, when, as Dungeon Master, Eddie tells his party, “There is no shame in running.” As beautiful as this personal philosophy is, he later expresses nothing but shame when confronting how he left Chrissy alone. Yet none of Eddie’s friends punish him for being afraid. Instead, they validate him.

It’s also important to note Eddie never sexualizes any female character. Not only does this challenge the norm within canon, it underlines how easy it is not to hyper-sexualize Stranger Things actresses like Millie Bobby Brown. His ability to respect women and share how he feels doesn’t cancel out his personality… or that badass guitar solo.

Why Eddie Munson and Steve Harrington’s Relationship is Refreshing

Rather than lean in to a predictable dynamic of macho rivalry, Joseph Quinn improvised lines hinting at Eddie having a crush on Steve Harrington. The two share a heartwarming moment in the woods amid Vecna’s mayhem where Steve comforts Eddie after they admit they were jealous of each other.

It matters because two monster-slaying boys set time aside to address how they feel and acknowledge the very real insecurities they had. Rather than telling each other to “man up” or put on masks of bravado, Eddie and Steve get real with themselves and each other. Honestly, romantic or not, it’s refreshing to see Steve, who goes from being a people-pleasing jock to bat-swinging caretaker over the course of the show, make a friend his age.

“I love you, man,” Eddie Munson says to Dustin before dying. There’s no doubt Eddie’s words will make it in the hall of fame of Stranger Things quotes. (Unsurprisingly, Joseph Quinn also improvised these last words. He’s tapped into the nuance of his character with genius.)

Eddie’s tears or sometimes comedic screams don’t undermine any of his sacrifice — it doesn’t mean any less because of how loudly he feels. If anything, his sacrifice means more.

Another huge reason why Eddie matters beyond the realm of television is how his arc points to how important it is to find community. When dealing with body-snapping telepathy or more common life stressors, it’s important not to feel alone. The Hellfire Club was not just a way to pass the time with D&D, but a place where outsiders could belong. (The shirts selling out shows just how much viewers can relate.)

The truth is, it wasn’t just Eddie who was stuck in a box society created for him. He openly shares his misguided first impressions with the Hawkins gang, from Erica’s youth to doubting Steve’s good nature. The difference between him and a character like Billy or Jason is his ability to accept when he’s wrong. He even accepts these new characters as his friends.

Even with a whole community against him, he held compassion for “lost sheep” until the very end.

RELATED:  11 Stranger Things Quotes to Turn Your Life Upside Down

Eddie Munson tugs at so many hearts because of his own. Fans celebrate him not in spite of his eccentricity, quips, or quirks, but because of them. Despite the town’s opinions of him, he stays kind and spreads the gospel of good music motivation through all kinds of danger. It’s no wonder the Stranger Things fandom is pumping out theory after theory on how he could return.

Whether he does or not, one thing is for certain: Eddie Munson comforts and inspires anyone who’s ever felt like they were “too much.”