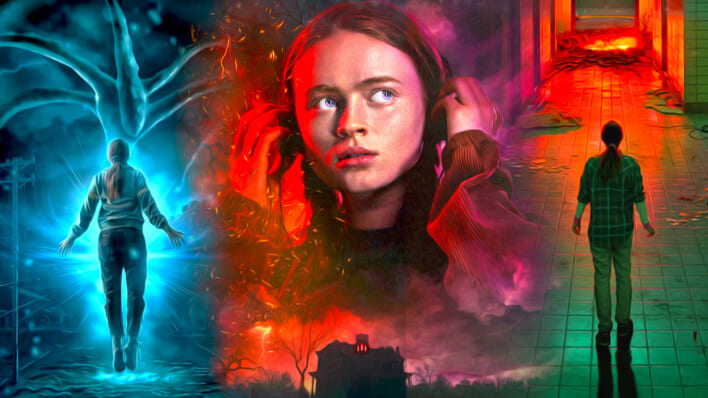 Through Max’s Season 4 storyline, Stranger Things presents the most heart-wrenching yet powerful allegory for depression, providing a cathartic viewing experience for anyone who’s suffered with their mental health.
By Micah Yip    August 3, 2022

Through Max’s Season 4 storyline, Stranger Things presents the most heart-wrenching yet powerful allegory for depression, providing a cathartic viewing experience for anyone who’s suffered with their mental health.

Warning: Some may find the following topics triggering.

Since it premiered on Netflix back in 2016, Stranger Things has captivated audiences with its compelling mix of sci-fi/horror and good ol’ 80s nostalgia. The mysterious world of the Upside Down came with terrifying monsters the characters had to defeat, but this season’s villain, Vecna, is the most horrific yet, and not for the reasons one might think.

RELATED: Stranger Things: There’s a Reason You Love Eddie Munson – And It Isn’t That Guitar Solo

Sure, Vecna is powerful, with abilities that surpass even Eleven’s. But what makes him so scary is that he is the personification of depression, trauma, and suicidality. Through Vecna’s targets — Chrissy, Fred, Patrick, and especially Max — Stranger Things Season 4 presents the most heart-wrenching yet cathartic allegory for depression and suicide.

How Stranger Things Shines a Light on Trauma

The most potent allegory comes with Max Mayfield’s main storyline. She’s dealing with immense depression over the death of her stepbrother Billy, who was killed last season by the Mind Flayer.

Between these two seasons, the guilt seems to have eaten away at her, because the very first episode presents a Max who is a shell of herself. Her wit and personality have been replaced with an aura of sadness. She blames herself for her brother’s demise, and consequently, suffers from survivor’s guilt, believing she could have done more to save him. Her nightmares and flashbacks are signs of PTSD. Her witty personality is dampened and she’s isolating herself from her closest friends. She’s seeing the school counselor but has trouble opening up to her.

RELATED: What Wes Anderson’s ‘The Royal Tenenbaums’ Taught Us About Finding Humor in Trauma and Dysfunction

These are all symptoms of depression, and as if this illness wasn’t difficult enough to endure, Vecna steps in to make it even worse. It is revealed that he is the one inflicting the nightmares and flashbacks, amplifying the immense feeling of guilt, feeding into her deep sorrow.

Vecna Is the Physical Form of Depression

After Vecna murders Chrissy and the others, he continues to torment Max with horrifying visions, feeding her false belief that she’s to blame for Billy’s death and adding to her psychological instability. Eventually, in Episode 4, “Dear Billy,” Max realizes Vecna is coming for her next, which prompts her to write letters to her loved ones. Presumably, these are goodbye letters, and it’s common for such letters to be left behind by victims of suicide.

Shortly after this scene, she goes with Lucas, Steve, and Dustin to the cemetery where Billy is buried. The three friends know something is up, so Lucas tries to stop Max before she goes to her step brother’s grave. “Just talk to me. To your friends,” Lucas pleads with her. “We’re right here. I’m right here.”

Max’s expression displays a mixture of contemplation and emotional numbness before she turns from Lucas and towards Billy’s grave. This is yet another parallel to real-life depression. In many cases, such as with Max, the sufferer may feel that they are “bad” and unworthy of help, causing them to push away their support systems.

Away from her friends, she begins to read the heartfelt and heart-wrenching letter to her step-brother’s headstone. And once she finishes reading the letter, Vecna strikes.

The villain pulls her into the Upside Down while her physical body remains in the cemetery, eyes rolled back in a trance-like state. Luckily, Steve, Dustin, and Lucas rush to her aid, playing Kate Bush’s “Running Up That Hill” through a walkman while they desperately scream for her to come back. But sufferers of depression can’t just “snap out of it,” just as Max couldn’t snap out of the trance Vecna put her in.

While this is happening in the cemetery, Vecna has Max trapped in the Upside Down. She has visions of a bloodied Billy, who tells her she wanted him to die, and reminds her of how she sometimes wishes she could’ve followed him into death.

“That is why I am here, Max,” the vision of Billy says. “To end your suffering once and for all.”

That’s really all sufferers of depression want — for their suffering to end. And sometimes, it’s difficult to see any other way out.

Max Teaches Us How Depression Can Lead to Isolation

Here is where the iconic “Running Up That Hill” scene begins. Steve, Lucas, and Dustin run to her aid, playing the Kate Bush song through a walkman in hopes of bringing Max back. Just as music can be a very useful coping mechanism in real life, music serves as a temporary escape for Max as well. The song cuts through the darkness, and in the distance, Max can see her friends crowded around her body, pleading for her to come back.

In her darkest, most desperate hour, Max can see how much her friends love her. Flashbacks of her happiest memories play in her mind as the music swells and a semblance of hope seems to return to her. This gives her the strength to break away from Vecna and run to her friends, dodging everything the Upside Down throws at her in an attempt to thwart her escape. She returns to her body in the Hawkins cemetery, jolts awake, and falls down to the ground, her friends there to catch her and comfort her.

Once again, this scene allegorizes the experience of depression and suicidal ideation, this time emphasizing how powerful a steadfast support system can be. When Max is at her lowest, her friends stick by her. She’s able to see and realize how much she’s wanted and remembers happy moments. And though it is anything but easy, she finally has the strength to run to the people who love her and accept their help.

Though Max appears a little less downtrodden throughout the rest of the season, she’s nowhere near in the clear. Just as with any mental illness in the real world, coming back from a major depressive episode and narrowly escaping a suicide attempt is only the beginning of the recovery process.

Max continues to wear the walkman, constantly listening to “Running Up That Hill,” and while music can be a good distraction and grounding tool, it only works temporarily for people who are suffering mentally. This is evident in the way that Max can avoid Vecna with music, yet cannot completely rid herself of him.

Max sticks close to her friends for the rest of the season, and her friends stick close to her. There are scenes where her friends keep checking in on her and get a little frightened when she’s out of their sight for even a minute, afraid Vecna could strike again at any moment. This is similar to how, when a person is experiencing a mental health crisis, their loved ones may remain physically close to them should any self-harm thoughts resurface.

Stranger Things Season 4’s underlying theme of mental health struggles is powerful, especially for sufferers of depression and suicidal ideation. When done correctly, it can be cathartic for someone to see their experience reflected to them on screen. Stranger Things lives up to this standard, as it conveyed the experience of depression through Max and Vecna in an artistic yet relatable and accurate way, including the symptoms one might feel and the enormous difficulty that is recovery.

If you or someone you know is struggling, please reach out to the National Suicide Prevention Lifeline at 988, or text TALK to 741-741 to reach the Crisis Text Line.