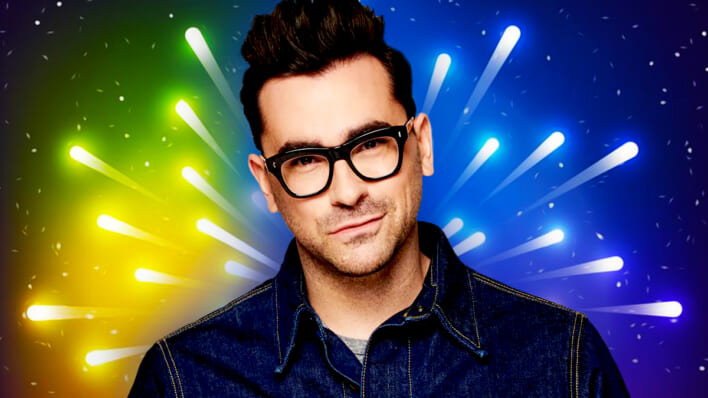 Dan Levy AKA David Rose is harnessing the power of queer storytelling to recruit allies.
By Maya Khamala    June 26, 2022

Dan Levy AKA David Rose is harnessing the power of queer storytelling to recruit allies.

Everyone knows Canadian actor and comedian Dan Levy for his role as David Rose in CBC’s critically acclaimed sitcom, Schitt’s Creek (2015–2020), which he co-created with his father, legendary comedian Eugene Levy.

But fewer fans know the story behind this celebrated actor and producer’s rise to greatness. While most who identify as LGBTQ+ have a coming out story, sometimes learning about a celeb’s struggle to self-actualize can lend a fresh perspective to your own struggles, and accomplishments.

Dan Levy’s Coming Out Journey Was Fraught with Anxiety

Levy came out at 18 with encouragement from his mother.

Although he’s been out and proud since he was a teen, anxiety plagued his decision, inevitably affecting how he interacted with the world. At one point, he said, his anxiety got so bad that he temporarily developed vision problems. “I think that came from a deep-rooted fear of knowing that I was gay and not being able to be free,” he shared.

“By the time I got to high school when your brain is starting to catch up to your physical impulses, it led to a very confusing time. Because on the one hand, you are now being introduced to things like self-awareness and anxiety. At the same time, you’re becoming more and more savvy when it comes to hiding it,” he said.

Though he has made progress over the years, Levy, 38, still copes with anxiety, such as on the set of Schitt’s Creek, where he worked tirelessly to fulfill his vision. His social life, too, is at times compromised due to his strong work ethic.

Dan Levy Found His Confidence By Wearing a Temporary “Shell”

At a young age, Levy sought refuge in theater. He found it easier to blend in while wearing a temporary “shell.”

“I was starting to develop a sense of confidence by way of being able to entertain people. It was like a decoy version of myself that I was putting out there to not have to live with the reality that when the bullying was happening – if someone was calling me a f****t or whatever it was – they were speaking the truth,” he says.

Today, a more experienced Levy discusses new considerations: namely, being protective of his limited energies in the face of a hectic Pride Month — and hectic life in general.

“The greatest gift we can give ourselves is knowing our limits. It took a while for me to realize that you can say no and still be a proud gay person. You can watch the parade from your friend’s window and not be in it. I think that’s the greatest gift — being able to say, ‘I think I’m going to tap out at this point.’”

Dan Levy Is Working on Manifesting a Healthy Relationship

Although he’s now famous, Levy is still working toward having a healthy relationship. “I was not in any place to be of great value in a relationship,” he says of his college years.

Although he’s had many ups and downs, he still has hope, and “would like to date more.”

Levy says protecting himself from “all the noise” — such as hateful online comments and pressure to dominate at the box office — is the biggest obstacle to delivering stories “that hopefully change people’s minds,” like the one about David and Patrick on Schitt’s Creek.

The beloved sitcom offered Levy an opportunity to weave his own personal experiences into the fabric of the show. Its depictions of the treatment of gay people are surely depictions of reality as Levy would have it — just as its depiction of David and Patrick’s relationship reflects a healthy union as Levy imagines it, and how he would want society to accept it.

“I think to tell very casual stories about a family that doesn’t ask any questions about who their children love,” says Levy, “kind of subliminally sets an example for other people, because at no point is it in contrast to anyone else, it’s just saying, this is how it should be and if you watch the show and like the show then maybe it’ll force you to ask some questions in your own life.”

“Speaking your truth,” says Levy of queer storytelling, “presenting yourself in a truthful, direct, honest way without fear of judgment or criticism, really — isn’t a straightforward process for any member of the LGBTQ+ community. As queer people, there’s always, without fail, going to be those who disapprove of what you put forward. It’s just a matter of finding the perfect balancing act that allows you to keep your head down, but keep your chin up at the same time. It’s not easy.”

It’s not easy, but Schitt’s Creek received accolades from the LGBTQ+ community for its portrayal of gay people and relationships. Levy said the series also heard from many who became allies after seeing the show.

“To be honest with you, I would say at least half of the feedback that we got was from people whose minds were changed and I think a lot of that had to do with the fact that the stories kind of revealed themselves over time, so there was a tenderness to the way that people were learning,” said Levy.

RELATED: How Rebel Wilson’s 50-Date Challenge Led to a New Partner – And a Surprising Revelation

“It was just watching people live their lives… the connectivity of watching people and ultimately loving these people that people who have kind of different faith-based backgrounds or political, whatever it was that was hindering them from understanding the community and loving and empathizing with the community, it was changed by the fact that they found themselves disarmed by I guess the character of David and he led them into a conversation they never really had the intimacy to be a part of.”

“I can’t see how someone watching that wouldn’t want to kind of improve their own life or to be a little bit more open-minded.”

Levy’s upcoming projects include a gay romcom, which he dubs “a love story about friendship,” and there are growing rumors of a Schitt’s Creek movie.