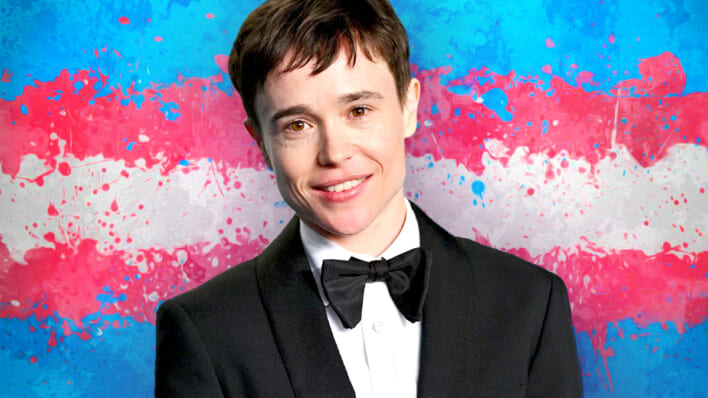 Trans man and actor Elliot Page became an activist for trans people when he came out publicly a year and a half ago. Now, he’s released an article on his experience thus far, and it contains words of wisdom that can be applied to anyone’s life, whether they’re trans or not.
By Micah Yip    June 9, 2022

Trans man and actor Elliot Page became an activist for trans people when he came out publicly a year and a half ago. Now, he’s released an article on his experience thus far, and it contains words of wisdom that can be applied to anyone’s life, whether they’re trans or not.

In December 2020, actor Elliot Page rocked the internet when he announced on social media that he is transgender.

Now, a year and a half later, Page (whose pronouns are he/they and thus will be used interchangeably in this article) describes his experience in an article published by Esquire.

While a transgender person’s life experiences are very different than that of a cisgender person, Page’s words can provide wisdom applicable to anyone’s life.

Elliot Page’s Biggest Lesson after Transitioning Is All about Joy

The very first line in Page’s Esquire article perfectly encapsulates his experience since publicly coming out in December 2020:

“What have I learned from transitioning? I can’t overstate the biggest joy, which is really seeing yourself.”

These words describe the euphoria that comes with finally being able to be themselves and not having to conform to what outside forces expected them to be.

Though it can be quite difficult to step into one’s true identity (especially for those who are part of a marginalized or highly discriminated against group like Page), there can be such joy and freedom found in it. Page, for one, has certainly found this joy in pursuing his true self. “When I say I couldn’t have ever imagined feeling that way,” he writes, “I mean that with every sense of me.”

“Why Is Sensitivity Weaponized” for Men, According to Elliot Page

In another quote from his Esquire piece, Elliot Page writes, “Why is sensitivity weaponized? I really feel for cis men in regard to the restraints and repression and suppression that stem from the expectations of your gender.”

In a patriarchal society, sensitivity isn’t valued. Men are “supposed” to be strong and stoic, not emotional and sensitive. But this is categorically false. Emotions are for everyone — men, women and non-binary people alike. “I feel bad that [men have] been brought up in a society that equates masculinity with emotionlessness,” Page writes.

RELATED: Billie Eilish Revealed a Secret, ‘Really Weird’ Condition – And How It Makes Her Stronger

The actor understands that sensitivity is part of the human experience, and he seems to have come to terms with allowing himself to feel that emotion. In a previous paragraph, they write, “‘You’re too sensitive.’ Excuse me? The stuff trans people deal with on a day-to-day basis? Excuse me?”

His words are laced with an attitude that declares, “How dare you tell me how to feel.” And he’s right. People have the right to their feelings and their truth. No one should have to suppress emotions. Besides, emotions, if not expressed, will just come out in a much less healthy manner.

Self Expression Matters, No Matter Who You Are (or Where You Work)

When the actor presented as female, Hollywood had expectations for him; one of which was wearing a dress to the Juno premiere. In the article, he recounts, “So I said I wanted to wear a suit, and Fox Searchlight was basically like, ‘No, you need to wear a dress.’ …It’s like: No. Regardless of me being trans!”

Page describes their disdain for these constricting gender roles while looking back on that time in their life. He recalls how his costar, Michael Cera, a cis man, got to wear slacks and sneakers. But now, Page makes it clear that people should be able to express themselves any way they want. He writes, “It doesn’t matter if I’m trans or cis. Lots of cis women dress how I dress. That has nothing to fucking do with it.”

Society’s gender roles shouldn’t dictate how a person must dress. Men, women and non-binary people should be able to express themselves in whatever way they see fit.

“Jokes Have an Impact That Hurts People.”

In this section of their article, Page expresses how hurtful jokes can be. For the actor, he’s aware that the people who claim to be joking usually believe the hurtful things they’re saying — they just use “jokes” as an excuse. “And all we’re saying is: Can you just please listen and understand the harm that it causes?” he pleads the reader.

These jokes that Page is referring to are likely society’s rampant transphobia, largely perpetuated by the media. Transphobia is the aversion to or discrimination against transgender people. It can come in many forms, ranging from micro-aggressions like refusing to use a trans person’s pronouns, to outright physical violence. Most people don’t realize that seemingly “harmless” jokes are the source of discrimination and prejudice. And that stuff hurts.

RELATED: Inventing Anna’s 10 Best Quotes – And How They Can Make You Feel More Audacious

Empathy is the key lesson here, and it’s something that the world greatly lacks. Not everyone will understand why a person’s journey is so different from their own. But it doesn’t matter. People don’t have to understand in order to have empathy and be kind to others.

For Elliot Page, “Forgiveness Depends on the Situation”

The age-old saying “forgive and forget” can’t always apply to every situation. Forgiveness might be healing to some, but for others, healing comes in a different way. Page has a clear understanding of this, as he writes, “I don’t know what this thing is about always having to forgive. I don’t wish them harm, but I shouldn’t feel obligated or forced to forgive them.”

Maybe for others who feel similarly to the actor, forgiveness isn’t an option. Things happen to people that are so traumatic, so unfair, so hurtful that they must feel however they feel in order to get through the situation. Whether that’s anger, grief, sadness and everything in between, the idea that one should give forgiveness openly is actually somewhat toxic and invalidating.

To balance this idea out, Page adds, “[T]here are other people who, absolutely. Of course,” stating that he’d willingly provide forgiveness to some. This is a healthy way of looking at forgiveness–sometimes, forgiveness is emotionally accessible and other times it’s just not, and that’s okay.

As a trans man, Elliot Page experiences a kind of euphoria that cis people don’t: gender euphoria. Gender euphoria is the elation that washes over a trans person when they are embodying their gender in an authentic way or when they are affirmed for who they truly are.

While most people don’t experience this exact type of euphoria, everyone can find moments of joy in their lives. For Page, his other, non-gender related sources of euphoria come from “the act of waking up, making my coffee, and sitting down with a book and being able to read.” He further adds, “There is a universality to that. We’ve all experienced similar versions. It would be so nice, the more and more we can realize how much we’re all in this together. The same kind of stuff that comes at me is not not affecting cis people and making cis people be confined in spaces that are expected of them. This affects us all.”

Page acknowledges that everyone — cis, trans, or non-binary alike — experience the difficulties of living in a complex world. Finding little moments of euphoria in the chaos of everything else is vital and can possibly make life just a bit easier.