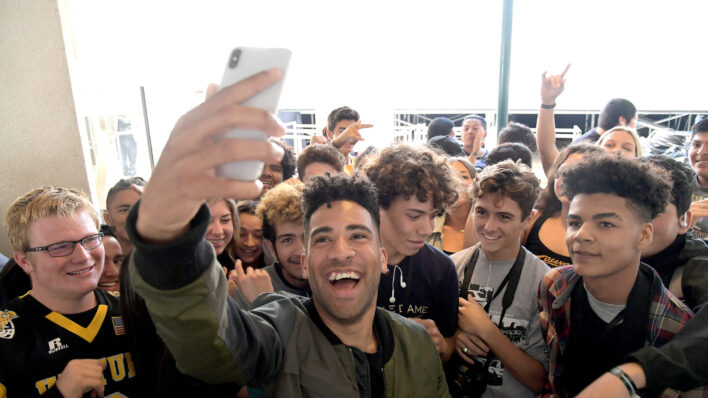 Five Minutes With: KYLE, the Rapper and Actor Fighting Toxic Masculinity Through Music

You probably know KYLE from Netflix Original The After Party or from top tracks like iSpy or Playinwitme, but what
By Kaitlyn McInnis    October 11, 2018

You probably know KYLE from Netflix Original The After Party or from top tracks like iSpy or Playinwitme, but what you probably don’t know about the rapper and actor is that his high school years were some of the most trying times he had ever experienced.

These days, he’s far from the shy, bullied kid from his formative years. In fact, he has made it his mission to inspire kids today to accept themselves and others, and to fight toxic masculinity in the locker room.

We went back to @SuperDuperKyle‘s old high school so he could share his story at this year’s Senior Orientation.

“I sort of thought the only way I could be a guy or be a part of hip hop, something I loved, was to be a different version of myself…something that I wasn’t.” pic.twitter.com/2EReooJK9z

When we found out KYLE was heading back to the very high school he spent so many difficult days with AXE Senior Orientation, we had to sit down with him to hear exactly how he felt about returning not-so-many years later.

Goalcast: What does toxic masculinity mean to you?

KYLE: Well, for me, I think it is the stereotypes that a lot of men, a lot of young men, are forced to put themselves into a box and it’s not necessarily healthy for their mind, their spirit, their personality.

RELATED: 5 Brain Hacks to Build Back Confidence If People Haven’t Been Treating You Well

I think for me specifically, growing up I kind of didn’t necessarily know how to accept myself or be myself because I wasn’t what a man was supposed to be in the eyes of so many people that were close to me.

Goalcast: How does toxicity manifest itself in the music industry?

KYLE: I liked hip-hop growing up but there weren’t any artists tapping into the things that I was tapped into. So for a long time I thought I was weird, I didn’t think I was good enough for pretty much anything. It all had to do with these toxic stereotypes about what masculinity was.

Being tough, being hard, being all of the same things that come along with toxic masculinity were in the forefront of the hip-hop community.

We’d think about NWA, we’d think about Snoop Dogg; all those pioneers of what rap used to be, all came from a culture and a lifestyle that was very much emotionless, very much cut out from being a sensitive person. So I think that’s how it kind of degreed its way into rap. It has taken a lot of work by a lot of specific artists to kind of uproot that.

In the past five years we’ve seen rap go from one of the darkest, least inclusive genres, to the leader on so many social issues. Whether it’s mental health or anything else, it’s a whole positive movement that came along. It feels like every single rapper you could think about right now is promoting being accepted and being positive.

And if you just rewind five years from today, when I first started rapping, that was completely the opposite of how people were. If you did anything that was remotely soft, it was like, “You are not hip-hop enough.”

I was smart enough to go back and do my research on people like Fresh Prince, Gavin Gashi, Queen Latifah and Salt-N-Pepa and all these guys. I would always make the arguments like, “No, you have no clue.” I was like, “In the beginning, hip hop was super expressive. Let’s not forget this whole bright, colorful era.”

Now, in the last five years, people like myself, people like Lil Yachty, people like Kid Cudi, all these great individuals just promote really loving yourself, and loving who you are as an individual.

KYLE: Yeah, it swings. History repeats itself. So now, the bright colors are back; just instead of wearing them on our shirts, they’re putting them in their hair. That’s like the major difference.

Goalcast: Drama class helped build your confidence in high school – did anything else make school easier for you?

KYLE: Drama class was clearly the biggest positive change in my life in high school, but I would also say, like I said, that’s when I was doing most of my music research, so discovering artists like Kid Cudi, who were open about the problems that they had and the insecurities that they had, was also a huge influence for me.

I couldn’t name you a rapper that ever once rapped about being insecure. Not one. And I’d been alive for fifteen years at this point.

I couldn’t name a song where a single rapper talked about maybe not feeling that great, not feeling untouchable, which is such a pain about rap, it was so damn macho at the time — everybody had a six pack, everybody had all the girls in the world, everybody had a bunch of cars; nobody had a problem. It was so weird to me, because I’m like, “Dude, none of us feel this way. Why are we all pretending that any of us feel like this?”

Goalcast: It’s all about being authentic. It makes all the difference.

KYLE: Definitely. And it really inspires what I ended up doing as an artist, because if you think about it, these kids out there, there’s nobody that’s more important to them in those developing years than whoever their favorite artist is. Self love is one of the biggest things that I promote; promoting who you are exactly how you are. That’s why I still have never gotten some dental surgery or something — like give myself a Tom Cruise grill — because I always just talk about the idea that you’re not flawed. There’s nothing that’s wrong with you. There’s no reason you should be ashamed about anything that you naturally have. If somebody was telling me that in high school, I would have felt completely different about myself from such a younger age.

RELATED: How Authenticity Saved My Life – and How It Can Help Save Yours

I just try to promote being authentic to the core. Just loving yourself for who you are and what you are.

Goalcast: How do you feel about being a role model for young men today? Is it a lot of pressure?

KYLE: I don’t feel pressured necessarily; I’m not really doing anything besides just being myself. All I gotta really do is wake up and just be KYLE. If anything, I feel motivated. It gives me a reason to continue to keep doing what I’m doing.

It was just a love of making music but now I have a whole group of kids that I know, every time that I continue to be myself, I’m helping them. So it’s just really a motivator for me.

Goalcast: What advice would you give your teenage self?

KYLE: I would tell him, Listen Kyle, look at me, listen: you, the you that you’re hiding inside of there that you’re not letting anybody know or see, is awesome. You’re a star, you’re funny… I know you barely talk because you’re ashamed of your voice and of having a lisp, but you can really rap! My biggest advice for myself back then would just be just trust yourself, love yourself and don’t be afraid to be that actual you that’s on the inside. Stop trying to conform to what everybody wants you to be. Be you. Be nice. Be gentle. Be caring. Be funny. Be an extrovert. Be all those things you’re meant to be because it’s gonna end up being good. It’s how you’re gonna become successful. Don’t shy away from being like the person that you are.