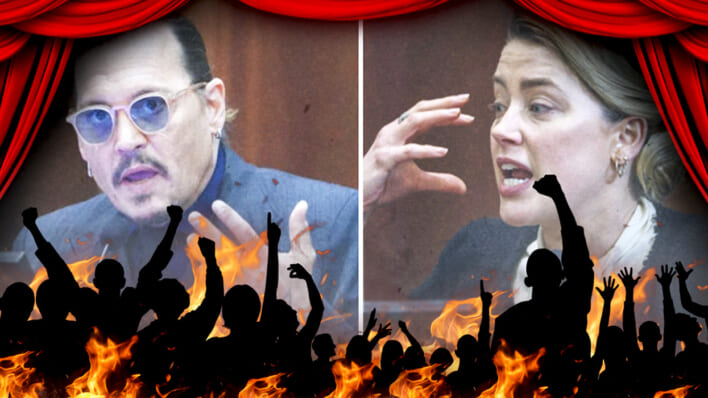 Johnny Depp Vs. Amber Heard: Why the Worst Thing about Hollywood’s Biggest Battle Might Be… Us?

The Johnny Depp vs. Amber Heard defamation trial currently has a death-grip on the public and social media. With such a high-profile case, it’s hard to look away. But maybe the public should, because it’s possible the online obsession is the worst thing about this case.
By Micah Yip    May 13, 2022

The Johnny Depp vs. Amber Heard defamation trial currently has a death-grip on the public and social media. With such a high-profile case, it’s hard to look away. But maybe the public should, because it’s possible the online obsession is the worst thing about this case.

The Johnny Depp vs. Amber Heard trial has been the latest media craze as of late.

Pirates of the Caribbean star Johnny Depp is suing his ex, actress Amber Heard (Aquaman, Pineapple Express), for defamation. Sides have been taken by both die-hard fans and the general public alike, with the most popular opinion being that Heard did, in fact, tarnish Depp’s reputation by proclaiming false accusations about their relationship.

However, the public can’t truly know what is true and what is not, and the fact that people continuously contribute to online judgments on the case might be a bigger problem than we realize.

Depp and Heard met on the set of The Rum Diary in 2009, and around 2011/2012, the two began a relationship. They got engaged in 2014 and then married in 2015. But a year later, on May 23, 2016, Heard filed for divorce, and shortly thereafter obtained a restraining order against the Pirates actor, claiming Depp physically and emotionally abused her, often under the influence of drugs and alcohol.

Heard’s 2016 claims were only the beginning of the accusations both parties would throw at each other over the next several years.

In 2018, a year after the couple’s divorce was finalized, Heard published an op-ed in The Washington Post, deeming herself “a public figure representing domestic abuse.” She wrote of the sexual abuse she sustained and her observation of how institutions protect male perpetrators. It was a timely article, considering it was published during the rise of the #MeToo movement.

Heard’s op-ed is arguably the thing that hurt Depp’s career the most, because after it was published, Depp was dropped from many roles, among them being the Pirates of the Caribbean franchise and Fantastic Beasts. Forensic analyst Michael Spindler recently revealed in the Depp v. Heard trial that the actor lost approximately $40 million in income due to the loss of these roles.

In response to this, Depp sued Heard for defamation in 2019. The lawsuit claimed that Heard was, in fact, not the victim in the relationship — rather, it was Depp. The lawsuit elaborated, claiming Heard was trying to gain publicity and financial compensation by alleging the abuse.

In July 2020, Depp went to court against The Sun, suing them for libel, as they had published an article with a headline calling him a “wife-beater.” But Heard struck back, filing a lawsuit against Depp, claiming that his suit against The Sun was a form of harassment towards her and a “smear campaign.” In November 2020, Depp lost his libel case against The Sun and was then denied an appeal for the case in March 2021.

Finally, the couple’s tiresome and lengthy legal journey has come to an apex, culminating in the current defamation case that has taken over every corner of the internet. The trial went to court on April 11, 2022, and has been the point of interest for the general public since.

This hyper-fixation on Heard and Depp’s imploded relationship might be a bigger problem than we think.

While it appeared Hollywood took Amber Heard’s side back in 2018 with the release of her op-ed, die-hard Johnny Depp fans weren’t so quick to abandon him. And four years later, their perseverance seems to pay off, as a large majority of social media has taken Depp’s side.

Videos on the internet, such as this TikTok by @jessvalortiz, prove massive support for the actor. The TikTok shows the actor leaving the courthouse in the back of a large black SUV while a swarm of fans shout his name, showering him with cards and gifts. One fan even threw in a box-like container that some say is a treasure chest. It’s evident where this crowd stands on the case.

Amber Heard’s car follows shortly after. The silence she’s greeted with in contrast to the fanfare Depp received is loud; until it’s broken by a Depp supporter shouting, “Lying narcissistic!” as her car drives off the premises.

RELATED: How To Stop Doomscrolling For Better Mental Health

The TikTok is meant to be humorous, and it is, proven by the 7.2 million views the video currently has. And this is just one small slice of the internet that scrutinizes Depp and Heard. Memes of the two are unavoidable on nearly every social media platform.

YouTube videos scrutinize every little glance, eyebrow furrow, smirk, frown and head turn of the ex-couple, claiming most of their nonverbal communication means Heard is guilty and Depp is the victim. Most of these accusations are done by regular citizens, not professional psychologists or body language experts. And the videos that are done by professionals feed the public’s insatiable hunger for the drama of the case.

However, the Depp v. Heard trial is not supposed to be a source of entertainment–in reality, these are two humans, clearly very hurt, attempting to prove their sides of the story. Their trauma has become the public’s source of entertainment, as trite as watching Real Housewives or other shows made for amusement.

These are lives on the line. These are reputations destroyed. These are families devastated. So where is the public’s empathy and respect?

Toxic pop culture isn’t new, and there are many factors that contribute to it, the rise of social media being a significant one. It’s easier to make fun of someone through a phone screen or a MacBook than it is to say it to someone’s face. Studies have posited that social media can reduce opportunities to practice empathy. It’s no wonder then that the public’s observation of the trial through social media seems to produce little empathy and mostly amusement.

It’s also worth mentioning that this case is tied to the #MeToo movement. While Heard initially associated herself with the movement back in her 2018 op-ed, the case now brings attention to male victims. While it’s certainly true that women experience a very high rate of IPV, men can also be victims, but this demographic is often overlooked.

Though the public can’t truly know exactly what went on behind the scenes in Depp and Heard’s relationship, there’s damning evidence against Heard that gives substantial weight to Depp’s claims of victimhood. And while some of society believes #MeToo is solely for women, men have important roles to play in the movement as well.

Of course, men need to stand up for women and speak up when they see their male friends engaging in or perpetrating misogyny and violence. However, another priority should be bringing light to the fact that men do experience physical and emotional violence in intimate partner relationships. Tarana Burke, the #MeToo founder herself, stated that there isn’t a “model survivor,” that abuse isn’t exclusive to one gender. She said, “I’ve said repeatedly that the #metooMVMT is for all of us, including these brave young men who are now coming forward. Sexual violence is about power and privilege. That doesn’t change if the perpetrator is your favorite actress, activist or professor of any gender.”

Thankfully, some of the public does recognize this important aspect of the trial. Depp coming forward with audio recordings and personal testimonies of the abuse he allegedly endured sheds light on the fact that men can be victims of domestic abuse. And while it is devastating that this possibly happened to him, it could encourage more male victims to speak up and receive justice. It brings awareness to the issue in general which is so needed in society today.

Amber Heard Is the Main Target of Internet Mockery

Some of the online chatter does highlight the importance of recognizing intimate partner violence (IPV), but it’s definitely not as pervasive as the memes and videos meant for entertainment or to make fun of those involved in the trial. Amber Heard is undoubtedly the main target, with the public posting unflattering photos of her on the stand, TikToks mocking her “fake” crying, and detailed scrutiny of her speech and movement.

RELATED: What Will Smith’s Oscars Slap Reveals about Anger, Patience and Responsibility

However funny this media is meant to be, and whether or not Heard’s claims are true, the actress is still talking about very heavy topics — things that do affect women. Is it really healthy and productive for the public to be mocking this? And what does that say about society? Is this helping or hurting the #MeToo movement for women?

Depp v. Heard is Complicated – And That’s Putting it Lightly

Depp v. Heard is complicated, layered and devastating. It’s so high profile that it’s tough to ignore. The accusations are so heavy and evidence so revealing that it’s hard to look away.

But maybe the public should take a step back. Maybe this case has shown that toxic pop culture has gone too far. Maybe society needs to look inward and examine themselves before looking outward. And maybe then society would rebuild its empathy, and wouldn’t look to a human being’s trauma for entertainment.