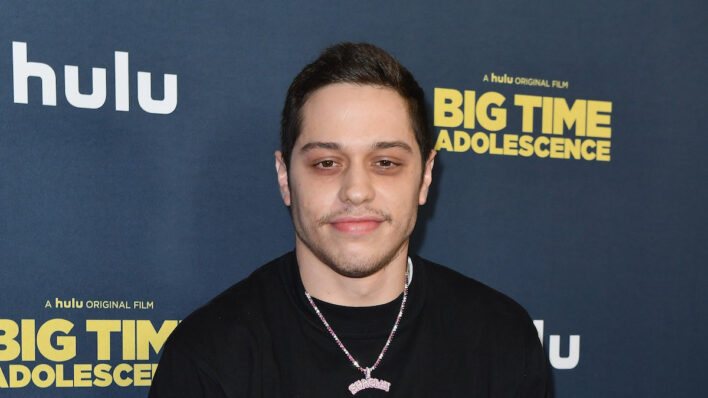 Pete Davidson has become the ultimate ladies’ man in showbiz. But is he simply punching above his weight or is there more to him than meets the eye?
By Shaoni Das    November 8, 2021

Pete Davidson has become the ultimate ladies’ man in showbiz. But is he simply punching above his weight or is there more to him than meets the eye?

How did Pete Davidson become one of the most eligible bachelors in Hollywood?

The Staten Island comedian has been a mainstay in New York stand-up scene for over ten years, but it’s been his involvement with high-profile women in show business that catapulted him into fame. The internet was practically forced to become familiar with him overnight; every single association with a female celebrity lifted him higher and higher into the stratosphere, causing people to investigate his background and examine why he seemed so desirable to women of all ages.

Ariana Grande, Margaret Qualley, Cazzie David, Kate Beckinsale, Kaia Gerber, Phoebe Dynevor, Kim Kardashian – these are just some of the women he’s been romantically linked to over the last five years. Yet, some people are baffled: how is the scrawny, stoner kid from Saturday Night Live drawing so many attractive and accomplished women from the industry? It’s perfectly acceptable to be curious and even a little suspicious of his attributes, but when it’s been happening for a while and women are continuing to flock to him of their own accord, perhaps we should give him his due credit.

Here’s how Pete Davidson established his status as one of the most coveted, alluring men in the industry:

A tragedy in his childhood that left him broken and confused

Pete Davidson was born on November 16, 1993, in Staten Island, New York City. When he was seven, he lost his dad, Scott Davidson, a firefighter, to the 9/11 attacks. The tragedy devastated the family and ended up alternating his development permanently. The 27-year-old hasn’t been shy about the mental health crises that took place following his father’s death. His mother, Amy, told New York Times how young Pete would “act out” in school, going so far as to rip all his hair out until he became bald. He faced suicidal ideation occasionally, something that plagues him to this date, and essentially became a “changed person” in what were supposed to be his most playful and innocent years.

Turning to comedy at sixteen “changed” his life. He learned there was an entire world out there that not only accepted his weirdness but celebrated it. The cramped comedy clubs of New York City became his safe space, where he found an outlet for his frustration and pain, where he was able to find humor and meaning in his sadness – it meant everything to him. His performances on stage helped him catch the attention of SNL boss Lorne Michaels, who promptly hired him on the late-night sketch comedy series as a featured player. At 20, he became one of the youngest cast members of all time.  Working at SNL, he became acquainted with several celebrities over time, which he parlayed into romantic dalliances many times. His relationship with Ariana Grande, for example, reportedly took shape in the crowded hallways of SNL when she’d been the musical guest in a 2014 episode.

His charming approach to dating and his vulnerabilities

At first, people were understandably confused by his sudden explosion in the tabloids. How did this man surface out of nowhere and snag one of the most beloved pop stars of our time? Over time, people realized something was special about Pete Davidson. It wasn’t just his funnyman charm, it wasn’t just his laid-back and self-deprecating nature; he genuinely cares about the people he dates and goes above and beyond to make them happy. He told Paper Magazine in 2019 that his love language is treating his partner like a “princess” and making her feel like she’s the most unique, wonderful person in the world.

I try and go as above and beyond as possible, because that’s what you’re supposed to do? If you’re in a relationship with someone, you’re just supposed to make that person feel as special as possible.

Sometimes, the strategy works wonders, and sometimes, it might overwhelm the woman in question, said Pete. He understands he has to maintain a balance at all times, and that’s okay. In addition to his attitude towards romance, The King of Staten Island actor is also incredibly forthcoming about his health struggles, whether it’s his borderline personality disorder or his Crohn’s disease. He’s an open book, and he doesn’t care if it makes him less ‘masculine’ as a result. His tendency to continuously go against the grain and use his platform to shed light on his vulnerabilities easily makes him appealing, and it’s no surprise so many women want to get to know him more.

I think if you’re able to be open, it’s really good. It’s reassuring when you hear someone that you admire talk about [topics like that] publicly, because it’s an embarrassing thing sometimes.

Is he really pulling women ‘out of his league?’

There’s also a dark side to the Pete Davidson discourse. With his latest rumored relationship with Kim Kardashian, a few people are popping up to bash the young man and express shock at his ability to pull so many women ‘out of his league.’ They may think it’s harmless, but the constant hammering of the point uncovers a relatively unmentioned problem in society: the assumption that you need to be conventionally good-looking to score with women. Being charming, funny, sharp, romantic, or generous means nothing if you can’t have the broad shoulders or the chiseled jawline or the six-pack, apparently.

Pete has so many lovely and irresistible personality traits, yet people continue to say that he’s punching above his weight. Do appearances really matter so much in society? Do your character or your attitude mean nothing? By constantly looking down on him in relation to the women he’s dated, you’re only dismissing him and the work he’s done on himself. He’s a worthy person who deserves love like everybody else, and we as a public shouldn’t judge him for this.

Pete himself said that the endless interest in his personal life has felt invasive to him at times, and he is uncomfortable by the increased paparazzi attention. He doesn’t enjoy people creating theories about his relationships or breakups and would like to go through the motions at his own pace. “The second [the public] knows you’re together, it’s already against you. You’re losing,” he told Paper magazine.

Appearances don’t matter as much as you think

Pete is a living, walking example of how crucial it is to cultivate the right mindset in life. Of course, looks matter to a certain extent, but they’re not going to help you sustain a relationship over time; it’s the company you provide, the jokes you tell, the deep conversations you have, the partnership you nourish through your unique personality. As they say, your appearance might get you the first date, but it’s what’s inside that’ll land you your second date.

So when we’re combing through our options and trying to find our match, think about the kind of partner you want to have for the rest of your life. Do you only care about how they look, or are there other factors that also matter? Furthermore, if you care about more than looks, you shouldn’t be so surprised that others, including notable female celebrities, think the same.

There is more to love than appearances
Wether it’s saving someone at sea or giving up your plane seat, kindness makes a lasting impact
Tags
Share
← Prev Post Next Post →