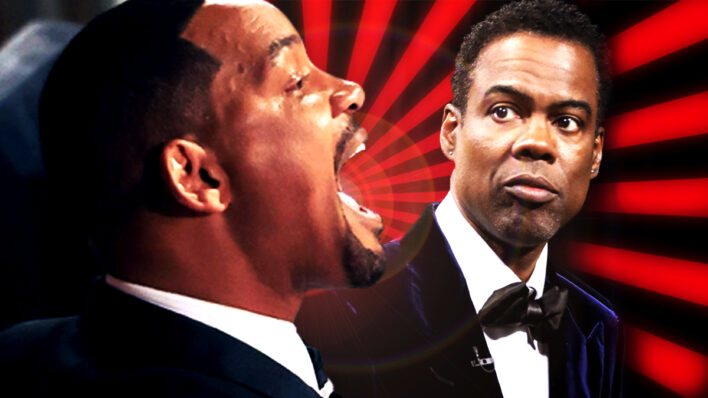 It was the slap heard around the world. But what can we learn after Will Smith exacted his rage on Chris Rock so publicly? What can it teach us about our own anger, shame and accountability?
By Maya Khamala    March 30, 2022

It was the slap heard around the world. But what can we learn after Will Smith exacted his rage on Chris Rock so publicly? What can it teach us about our own anger, shame and accountability?

It’s been several days now since Will Smith slapped Chris Rock across the face at the 94th annual Academy Awards — in front of a live audience, no less. Anyone not living off the grid in a tiny forest shack has heard all about the globally televised incident and the conversation that has erupted as a result online thereafter.

RELATED: Will Smith and Jada’s Decision To Work Through Her Affair Speaks Volumes About Their Marriage

And while there are many who decry the fact that the outrageous drama overshadowed several significant historic Oscar wins that night, the fact remains that it happened, and there’s a reason people want to talk about it — whether or not we identify with those reasons or not.

That said, maybe what we’re not talking about in the Will Smith V. Chris Rock Oscars kerfuffle is more important, especially what it says about us as people and how we handle our rage, our responsibility and our regret.

What Made Will Smith Slap Chris Rock at the Oscars?

Let’s break down this controversial event to its base components, shall we?

Chris Rock was on the stage at the Academy Awards doing what Chris Rock has always done: be funny… and controversial. Now, while “funny” is certainly subjective, that is why they pay him the big bucks. He was there to present the award for Best Documentary when he made a joke about Jada Pinkett Smith’s appearance. Here is what Rock said:

“Jada, I love you. GI Jane 2, can’t wait to see you,” he quipped. Of course, this wasn’t the first time Chris Rock made fun of Will and Jada. However, this time… well, hit different.

Jada has been vocal about her hair loss from alopecia in the past, and was seen rolling her eyes at his comment. Whether or not Rock knew much about Jada’s condition, he did know the complex and traumatic political history behind all things concerning Black women and their hair. In 2009, inspired in part by his two young daughters, Rock actually made a documentary exploring this very topic.

RELATED: Will Smith Needed To Own Up To His Failings To Understand Fatherhood

While Smith’s initial reaction was to laugh at the joke, when he noticed that Jada was rolling her eyes, he took it upon himself to waltz onstage and slap an awestruck Chris Rock across the face.

“Wow,” replied Rock as Smith walked back to his seat. “Will Smith just smacked the sh*t out of me.”

“Keep my wife’s name out [of] your f**king mouth,” Smith yelled back at the stage — not once, but twice.

“I’m going to, okay?” Rock replied, before adding, “That was the greatest night in the history of television.”

It was so over the top, many viewers initially thought it must have been staged. Unsurprisingly, the clip went ultra viral.

Mere minutes later, Smith was awarded his very first Oscar for his role in King Richard, in which he plays Richard Williams, father to tennis legends Venus and Serena. He took the opportunity to tearfully apologize to the Academy and fellow nominees — though pointedly, not to Chris Rock.

Smith explained that he felt “called” to be a protector, pointing out that, “Richard Williams was a fierce defender of his family,” and adding that, “love will make you do crazy things.”

Following the ceremony, the Academy addressed the incident in a statement.

“The Academy does not condone violence of any form,” it read, adding that the winners “deserve this moment of recognition from their peers and movie lovers around the world.”

A full meeting of the Academy’s board has since been called to discuss the incident, and explore “further action and consequences,” which some predict might include the revocation of Smith’s Oscar and/or his barring from future eligibility.

RELATED: Will Smith’s Troubled Relationship With His Father Forced Him To Man Up

For his part, Rock opted not to press charges, and tThe next day, Smith finally apologized to Rock. “Violence in all of its forms is poisonous and destructive,” he wrote in an Instagram post. “My behavior at last night’s Academy Awards was unacceptable and inexcusable.

“I would like to publicly apologize to you, Chris. I was out of line and I was wrong. I am embarrassed and my actions were not indicative of the man I want to be.”

The day after that, Jada, who has otherwise remained silent on the incident, posted a brief follow-up, reading: “This is a season of healing and I’m here for it.”

Why Will Smith Slapped Chris Rock at the Oscars – What Was He Thinking?

There are no simple answer here.

Some observers have looked to Will Smith’s abusive childhood and his consequent desire to protect people as reason for his volatile reaction. Smith has been very vocal about growing up with a father who was brutally abusive toward his mother. During his acceptance speech, his allusion to wanting to “protect” the people he loved could’ve been a callback to him wishing he’d been able to protect his mom.

Regardless of the exact reasons behind Will Smith’s reaction, responses to the incident have been extremely mixed, to say the least.

People have all kinds of opinions about “The Slap,” its meaning, and, of course, other people’s reactions. We live in the internet era, after all.

The incident has divided viewers into two main camps, with some arguing that Smith did the right thing, and others insisting his behavior was out of control.

There’s been a litany of harsh, rather punishing responses to Will Smith’s slap. Screenwriters Krista Vernoff and journalist E. Jean Carroll tweeted that Smith slapping Rock was tantamount to domestic abuse, and that it was extremely triggering.

Director Judd Appatow tweeted, “[Smith] could have killed him. That’s pure out of control rage and violence.” Before deleting his tweet, however, many took advantage of the opportunity to point out that after Busy Philipps accused James Franco of assaulting her on the set of Apatow’s Freaks and Geeks, he nonetheless chose to defend Lena Dunham’s controversial support of Girls writer Murray Miller, who stood accused of sexual assault.

Apparently “The Will Smith Doctrine” is even a thing now. Hint: it’s a metaphor for how Ukraine should not choose to handle the ongoing invasion.

Men’s studies scholar Shaun Harper’s first thought in the wake of the famed slap was, toxic masculinity. “Toxic masculinity,” he writes, “compels a guy to go immediately into bar fight mode when someone says or does something disrespectful to someone he loves. But what if slapping or fighting someone isn’t what the disrespected person wants or needs? Or even if it is, and the person says so, why not take a moment to pursue a range of alternatives to violence? Movies, television shows, video games, other forms of media and messages…have conditioned us men to act in ways that can be violent or otherwise toxic in moments like these. The ‘real men are protectors’ expectation is firmly entrenched in toxic masculinity.”

RELATED: Chris Rock Reveals The Surprising Reason He Does 7 Hours Of Therapy A Week

Then there’s the highly complex racial element, which simply can’t be ignored.

Some have pointed out that Rock’s joke must be seen in context: a Black woman was disrespected within a historically and systemically racist institution. Others have expressed that they were grateful to see a Black woman protected. These voices have all, however, acknowledged that violence isn’t the answer.

Roger Ross Williams, a Black member of the Academy’s board of governors, was extremely upset by the altercation. “I was in tears,” he said. “It reinforces stereotypes about Black people and it just hurts me. … Work it out someplace else, not on a stage.”

Speaking of race, The Guardian columnist Joseph Harker proposes that, “while it’s justifiable – important, even – to interrogate his motives for delivering the slap,” the backlash against Smith is rooted in “anti-Blackness” and “respectability politics.” He goes on to expose an industry double standard, listing off white men who have behaved just as badly or worse in such settings without being held to the same standards.

To complicate matters further, Whoopi Goldberg has suggested that the Awards show “let Will Smith be” following the incident so they wouldn’t have to navigate charged racial dynamics and explain “why they’re taking the black man out.”

Race and gender and differences of opinion aside, however, the best we bystanders can do is glean valuable lessons at moments like these.

Why Will Smith’s Slap Is a Lesson in Anger, Patience and Responsibility

Mike Fisher of the British Association of Anger Management asks, “What kind of message is he [Smith] sending to his huge fan base, many of whom are young people? He could have pulled Chris Rock aside afterwards, or given his wife the choice and the space to do that herself.”

As both an actor with a massive influence on his audience, and a parent of three young adults, one has to imagine that Smith understands the power of his words and actions, and the responsibility that comes with them.

No matter how we happen to feel about Will Smith slapping Chris Rock, there’s something to be said for his apparent willingness to apologize and be held accountable. In what seemed like an added attempt to hold himself responsible during his acceptance speech, Smith told the audience that Denzel Washington took him aside during a commercial break to share an important message:

“Be careful at your highest moment. That’s when the devil comes for you.”

RELATED: Kevin Hart And Will Smith Get Brutally Honest About Fatherhood Failures

Psychologist Dannielle Haig shares a word of advice for anyone who sees themselves in Smith’s reaction. “When it comes to anger and rage, many clients will say, ‘if they hadn’t done X then I wouldn’t be angry.’ This is totally incorrect…Taking responsibility for your choices is incredible liberating and gives you a greater sense of autonomy over your life.”

The reality is this: managing anger requires commitment, energy and patience.

In his public apology to Rock, Smith seemingly makes just such a commitment, humbly admitting, “I am a work in progress.”

The Will Smith and Chris Rock conversation is complex for many reasons, but in the spirit of learning from the debacles of others, we would all do well to keep in mind that multiple things can be true at once, and that we are all “works in progress.”