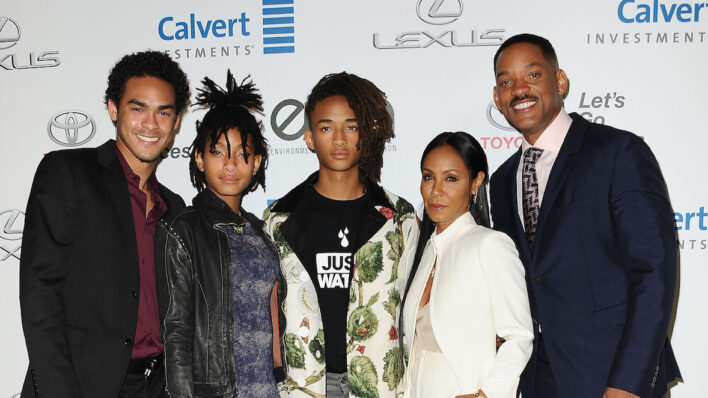 Will Smith and his wife Jada Pinkett-Smith are known for having one of the most wholesome families in Hollywood. But it wasn’t always that way.
By Shaoni Das    June 29, 2020

Will Smith and his wife Jada Pinkett-Smith are known for having one of the most wholesome families in Hollywood. But it wasn’t always that way.

As one of the foremost power couples in the industry, Will Smith and Jada Pinkett Smith’s marriage has served as an inspiration to many other pairs trying to make it work. But what’s significant about their twenty-three-year-old partnership is that they’re not shy about their past missteps or their ongoing struggles.

Instead, they use it as a force to guide them through navigating all the hurdles and frustrations.

But if anyone can do it, it’s Will and Jada. On a special Red Table Talk episode for Father’s Day, Will sat down one-on-one with Jada and discussed his struggles with fatherhood. He had previously spoken about how his relationship with his oldest son Trey struggled for a while in the wake of his divorce from Sheree Zampino.

But the new realizations that were disclosed in this episode go much deeper than that. Will may seem like the perfect father today but it hasn’t always been the case. As it turned out, Will needed to resolve a spate of emotions pertaining to his broken marriage and family before he could step up and be the dad he always wanted to be.

Will considers his divorce from Sheree as his “ultimate failure”

Will was just twenty-four when he became a father for the first time. But the experience of being a “perfect family” wasn’t in the cards for Will and Sheree as the pair get divorced just two years later.

The actor said in the episode that he had had a really difficult time with Sheree and Trey early on. He then revealed that divorce was the “worst thing” in his adult life, and it was the “ultimate failure” for him.

I’ve been hurt a lot in my adult life, but I don’t think anything touches the failure of getting divorced from my 2-year-old son’s mother.

Will and Jada also discussed another concept: just because someone’s a bad husband doesn’t mean they’re a bad father. As they were working out an arrangement post-divorce, Sheree had told him that if a man fails to be a good husband, then it’s only realistic that he loses his parental duties too.

Then Will went on to say that he knows that he’s a better father than he is a husband. This disagreement between Will and Sheree led to a lot of fighting over custody, leaving Trey feeling confused and torn in the middle.

Though divorce played a large part in Will not being able to connect with Trey properly, another factor also crept in. Will’s father was physically abusive towards Will and his mother, so the actor was all the more adamant to never let Trey see him get even the slightest bit abusive or aggressive. The fear of disappointing or even traumatizing his kid kept him “absent” from Trey’s life.

Will was so fraught that he turned to his own father for advice. His father told him to stop the fighting and the custody battle: “surrender,” said Will in the episode. He needed to back off and let Sheree take over the reins. As a result, Will carried the hope that Trey would come looking for his company one day, and that’s exactly what happened.

All of this just underlines that fatherhood is not a straight line. In terms of Trey, Will went from being a “terrified” young father who was afraid to mess it all up to a distant divorced dad who avoided his son for many years to his son’s “best friend,” as Trey put it recently.

Will also admitted shortly that the co-parenting partnership between both Sheree and Jada differed by a lot. Whereas he and Sheree bickered and argued like there was no tomorrow, Will and Jada like to work through their problems through more conductive and calm solutions.

He also said Sheree wanted him to be a particular sort of father to Trey, a type of fatherhood that Will knew he didn’t have it in him. However, there isn’t tension of that sort with Jada. He said Jada doesn’t force him to parent their kids how she does it herself; she just let him find his own style. And this worked vice versa as well.

But this was a realization that emerged much later for Will. Initially, he beat himself up for failing to be the kind of father that Sheree wanted to see. This further added to his distress and subsequently pushed Trey even further away.

I’m not that guy. I’m not the ‘parent-teacher meeting,’ ‘baseballs with the kids’ [kind of dad]… I’m the ‘we are going to build something together for work’ dad. Like my father was to me. I’m always looking for things that we both enjoy doing.

Despite his disagreements with Sheree, Will knew that he had to cultivate a pro-active parenting relationship with her for Trey’s sake. In the first episode of Red Table Talk, Jada and Sheree discussed how they didn’t get along well at all in the beginning. But Will was the one who stepped in and told Jada that she had to be respectful to his son’s mother.

Willow showed him how to recognize “feelings”

Before Jaden and Willow, Will was fairly confident about the type of father he wanted to be and the kind he didn’t want to be. But even he’s realized by now that his journey of parenthood isn’t a static thing; one has to constantly develop their process to match the needs of their children.

With Trey, he learnt that he couldn’t “father from a distance.” So he decided to get Jaden and Willow homeschooled so they would be able to travel with him and spend more time with him. This was a critical step in committing to his role as a father, said Will. But Willow made him rethink so many of his prior values.

Before Willow, he had brought a certain “military mindset” towards his boys, a certain flavor of discipline and sternness that he believed was necessary to build his kids’ strengths. This mindset was instilled in Will by his own father so he didn’t think twice to pass it on.

But Willow wouldn’t play by those rules. She questioned Will whether he cared about her feelings when all Will wanted to do was solve problems and get the work done. Will also reported being “devastated” when Willow shaved her hair off.

[Willow] destroyed all my belief systems…I saw how much I was making and forcing and pushing the things that I wanted and in that moment, I saw that it was starting to hurt her…She introduced me to feelings. Because if I don’t care about how I feel, I damn sure don’t care how you feel.

Will Smith at Red Table Talk

Willow simplified a phenomenon that had eluded Will for years: being able to reach in your internal state of mind and evaluate your reactions rather than trying to force everything to go your way. At that moment, parenthood had forever changed for Will.

Address your failures but remember to let them go

Will Smith is still continuing to manoeuvre the treacherous waters, that is, fatherhood. There is no one right answer, there is no one wrong answer. Little things go a long way and some massive aspects don’t matter at all. All in all, there are no fixed rules per se and it’s going to be a struggle for everyone, whether they know it or not.

Will Smith’s two marriages colossally shaped his parenthood methods. Sure, Jada and Sheree’s personalities are different but Will himself has changed over the years and therefore his fatherhood style followed suit. From Trey, he learnt that he needed to keep his kids close; from Willow, he realized that feelings needed to be appreciated to move forward in life. Each relationship taught him lessons and uncovered failures. While he took the time to regret those failures, he also let go of them.

In order to become the best father, or best mother, sister, friend or spouse, for that matter, you need to be wholly honest to yourself about what you did wrong. You also need to remind yourself of what you’re doing right. If all else fails, you can seek advice from loved ones, too. But at the end of the day, those failures are nothing but an impetus for you to get your act together and change with the times.

Will Smith may be one of the perfect stars on the planet but if he has to continually evaluate his role as a father, then you should know that the challenge will be ongoing for you as well.