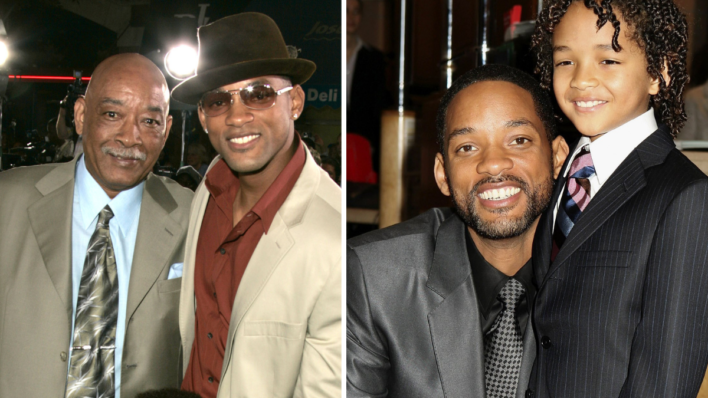 Will has learned some lessons from his less-than-perfect relationship with his father that he swears he won’t repeat with his own son
By Shaoni Das    August 19, 2021

Will Smith is widely characterized as one of the most thoughtful, empathetic, and supportive dads in Hollywood.

He’s never shied away from taking active participation in his children’s lives, but at the same time, he believes in affording his children adequate space and time to help them flourish independently. Of course, the family is blessed with countless opportunities and immense wealth, but the resources don’t exempt the parents from the strenuous duties associated with parenthood. You still have to put in a shift, prioritize your children’s wellbeing, and do your best to guide them through everything life has to offer, good and bad.

While Will does seem like a picture-perfect dad, it didn’t just happen overnight. Like many other fathers, he has had to take the long, winding road to realize his responsibilities as a dad. He knew he couldn’t just wave his magic wand and be present for his children. He had to resolve his misgivings, carve his own path, and learn from the past. This includes a tortuous childhood and a twisted relationship with his own old man. Here’s how Will Smith learned to reconcile his past with the present to become a better dad:

Will Smith, in an episode of his wife Jada Pinkett Smith’s show Red Table Talk, shared there were “massive critical deficiencies” in his father’s parenting. Will was born to Caroline Smith, a school board administrator, and Willard Carroll Smith Sr., a veteran from the U.S. Air Force. He grew up with an elder sister and two younger siblings and loved belonging to a big, nuclear family  — something he wanted to mirror in the future.

I was a gentle kid, like, I was not a kid that you had to slap or punch or beat. So growing up in a household where physical aggression was approved of, that really chaffed my hide. That hurt my spirit.

“By the time I was ten years old, I remember looking at my father, thinking I could do it better than him,” he said. He essentially went through his entire adulthood impassioned to “correct” his father’s consequential mistakes. Willard Sr. had a bit of a “temper” on him, Will said, which became the root cause of much of the tension in the household. Young Will faced the brunt of the physical violence, which exceedingly “hurt his spirit.” But it was witnessing his mother being subjected to the same type of assault that transformed his outlook on life and formed his “biggest emotional scar.” As a result, he promised himself never to repeat his father’s actions and never inflict so much pain on his offspring.

What is particularly heartbreaking about his dad’s rage is that Will was, by and large, a “gentle” child who didn’t deserve to be on the receiving end of the bashing. There was a myriad of ways Will’s dad could have disciplined his brood, but he always, without a doubt, opted for the vicious, more harmful route. Therefore, it was hardly a surprise that the Hancock actor strived to carve out his own unique place as a young father outside of his father’s influence and the traumatic memories that accompanied it.

But he also appreciates his “discipline” and approach to fatherhood

As resentful as he may have been of his father’s cut-throat demeanor, there was also tremendous respect between Will and his old man. Willard Sr passed away on November 7, 2016, from cancer complications, and as such, Will has learned how to make peace with his dad’s ugly side while admiring his more inspiring mindset around life. “He was a teacher. Every single moment was a teaching moment,” said Will. He urged Will to look beyond the traditional school system to cultivate knowledge; in fact, school might “get in the way” of your journey. Therefore, Will made it a point not to hassle his children continuously over school; in his view, “everywhere is school.”

He was an old-school, hard, military-minded […] he was a firm disciplinarian. He demanded order. The combination of order and teaching made him a very powerful role model and a psychological force.

The father-of-three mentioned that it was his dad’s advice back in the nineties that propelled him to accept responsibility for his son Trey and be more hands-on with his upbringing. “His thing was, ‘you can’t father from a distance,’” said the Independence Day actor. He empowered Will to lose his fear of things that are impossible, showing him how he could approach his work in a way that would serve the family. Becoming a dad at 24, Will wasn’t prepared and felt “stark terror” at the prospect of being responsible for a human being. That’s when it dawned on him that his father had done the best he could under the circumstances and that it’s an uphill battle to master parenting, if that’s possible at all. All his father’s critical lessons came flooding back, and he decided he was more like his father than he’d thought.

But he also showed me the things I would absolutely, positively, never do to my children. He was so smart but then when he would get angry, he would turn into the dumbest person I’ve ever met. As a kid, I couldn’t understand it.

Ultimately, the discipline instilled in him by his father made him the man he is today. The “man-training,” as Will puts it, was essential in his evolution as a man, a father, a husband, and an actor; he understood the value of honing your craft with restraint, control, and exacting structure. If it wasn’t for old Williard, the actor wouldn’t have so many achievements to his name. The perfectionism made him a better man but it also came at a cost.

Parents aren’t perfect, but we can still love them

It’s not a black and white world, and Will Smith will be the first to tell you that you can’t judge a person solely for their failures. Every person has the potential of the utmost kindness and empathy, but if they’re led astray, the potential can disappear, and they started leaning on their most primitive instincts. Willard Sr had a number of flaws; his explosions have left behind lifelong trauma and guilt, but simultaneously, his legacy can be felt in Will’s impact on the world. He molded Will into the man he is today, and though Will’s had to do considerable work to not follow in his dad’s footsteps, he’s still appreciative of the work ethic he drilled into him.

Each and every one of us will have something or the other to say about our parents. They weren’t perfect; they were perhaps neglectful or overbearing or reckless or helpless or irresponsible or pushy or cold or demanding. Yet, most of us can also confidently say we love our parents. It’s, of course, biologically encoded in us, but we also understand that we can’t just focus on the negative facets. Most of our parents also demonstrate incredible qualities that we can only hope to emulate and practice. It’s easy to say we can pick and choose how we’d like to take after them, but realistically, we have no control. So appreciate your parent for who they are, but also admire your individuality and how it survives in you and you alone.