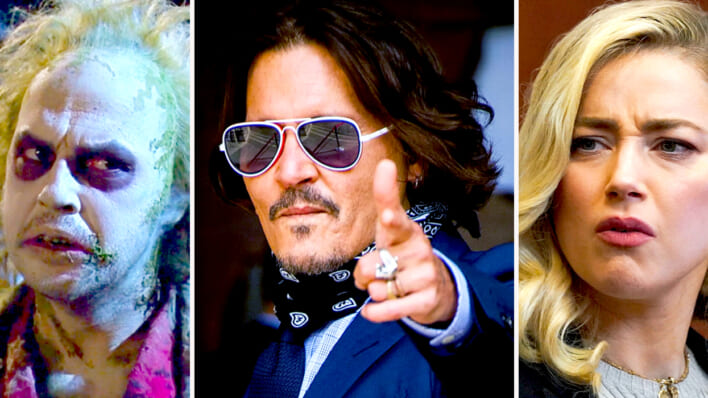 After a six-week defamation trial against ex-wife Amber Heard, Depp was rumored to be added to the cast of Beetlejuice 2. But does his Hollywood resurrection create a worrying problem?
By Bianca Mercuri    June 1, 2022

After a six-week defamation trial against ex-wife Amber Heard, Depp was rumored to be added to the cast of Beetlejuice 2. But does his Hollywood resurrection create a worrying problem?

The 1988 Tim Burton film, Beetlejuice is a beloved cult classic, which is why the prospect of Beetlejuice 2 has been highly anticipated for many years. Thanks to some eagle-eyed fans and in-depth Google searches, it is now being speculated that Johnny Depp may have a role in the sequel. His name, these internet sleuths report, is seen under the cast subhead of Beetlejuice 2 alongside ex-girlfriend Winona Ryder and Michael Keaton, who were part of the original film.

Depp and Ryder met when they starred together in 1990’s Edward Scissorhands. They then got engaged after being together for a short, and turbulent, five-month period. The pair broke it off in 1993 after four years together, never making it down the aisle. But, the possibility of Depp and Ryder reuniting for a film once again isn’t the reason why everyone seems shocked by the discovery.

Beetlejuice 2 would not be the first major film that Depp has starred in, of course. The long-time Hollywood actor is best known for his role as Jack Sparrow in the Pirates of the Caribbean franchise, and for his lead roles in other iconic films such as Charlie and the Chocolate Factory, Fantastic Beasts and Where To Find Them, The Lone Ranger, and the list goes on. His decades-long career speaks volumes about his talent.

However, do the recent allegations against Depp, and the legal proceedings that have followed suit, negatively impact that return? And more worryingly, does it set a dangerous precedent for similarly-beloved people also accused of heinous acts in the future?

Johnny Depp made headlines in 2022 during the six-week defamation trial against his ex-wife Amber Heard. Depp and Heard met on the set of the 2009 film The Rum Diary and began dating in 2012.

The defamation trial touched on claims of domestic and sexual abuse by Heard about Depp during their relationship, and specific claims made in her 2018 Washington Post op-ed. Her first claims of the alleged abuse by Depp came in 2016 after Heard filed for divorce soon after receiving a temporary restraining order against Depp. Six years later, the two battled these same claims in court.

The verdict of the trial was read on June 1, 2022, when the jury found overwhelmingly in favor of Depp, awarding $15 million to the actor.

The ultimate victory notwithstanding, Depp’s career slowed down significantly between the op-ed and the result of the trial. Disney came out quickly in support of Heard, or rather against Depp, as did many others due to the “Me Too” movement that was happening at that time. He was soon dropped from the Pirates franchise. But, these claims were quickly denied by Depp, which left his fans confused about the situation.

Depp sued Heard for $50 million, claiming that her false abuse allegations caused him to lose contracts such as the sixth Pirates of the Caribbean film. Heard countersued for $100 million and said that her career has halted since her breakout role in Aquaman as the female lead, Mera, due to statements made by Depp and his team which prevented her from acquiring further work in Hollywood, as well as nearly costing her her role in the sequel.

In fact, during the trial, Heard’s legal team called upon entertainment industry consultant Kathryn Arnold, who testified in front of judge and jury that her role as Mera was her “A Star is Born moment”. After claiming that Heard’s career arc was severely altered by claims made by Depp and his Lawyer Adam Waldman, Arnold went on to testify that in her opinion, Heard’s career could be compared to that of Aquaman himself, Jason Mamoa as well as Gal Gadot, who starred as Wonder Woman.

This trial was high-profile and followed by many who were eager to finally get insight into the abuse claims that Heard alleged back in 2016. Due to the volume of publicity that it got, many speculated whether or not the verdict of this case would allow Depp or Heard respectively to make a return to Hollywood.

While the actual verdict from the official jurors is now known, it was clear long before then that Depp won in the court of public opinion. However, is either victory truly enough to restore his reputation? We have seen the redemption of controversial celebrities in the past, and we are hoping Depp’s experience falls into that same category. Given the verdict of the trial, many are also speculating and anticipating the future careers of both of these actors.

Has Johnny Depp’s Reputation Been Restored?

The rumors of his potential return for the 2025 film Beetlejuice 2 have sparked opinions on what this means for Depp, and consequently, what it means when we think of men in power being accused of crimes such as physical or sexual abuse.

There is a pattern of erasing or overlooking problematic pasts for individuals in the spotlight. While this role would be an epic return, it’s worthwhile to ask the question of whether we should offer someone accused of abuse redemption in the first place, or if it is more important to demonstrate redemption when it was shown so clearly the way it was throughout the trial.

The excitement around Beetlejuice 2 is mostly due to the long-awaited sequel to an iconic movie, though a role in this film does seem right up Depp’s alley. While the question still stands about letting an accused abuser return to the Hollywood screen, there are many important themes that came up during the trial which allow us to believe that a return from Depp isn’t out of the question either way.

Many who tuned into the trial feel that Depp cast a light on domestic abuse against men, being a voice for those who have yet to share their stories. Depp has even been described as being brave for choosing to relive that traumatic time in his life, from his own struggles with drug and alcohol abuse to domestic violence against him by his then-wife Amber Heard.

This trial did result in compensation for both side — $15 million for Depp and $2 million for Heard — but beyond that, it was a chance for Depp to clear his name and get back to doing what he is best at: acting. Whether that will be a long-lasting future for either actor, however, remains to be seen, as both of their careers may be tainted by an incredibly grave asterisk.