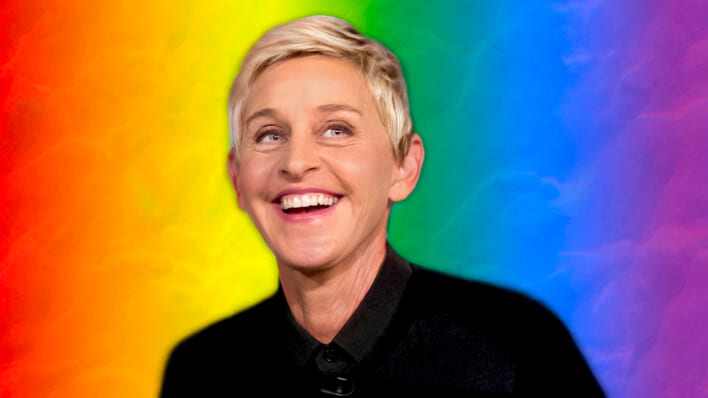 Ellen DeGeneres took a big risk when she advocated for a major change to her leading character on “Ellen.” Decades later, it’s easy to forget just how impactful that move really was.
By Jenna Pearl    June 18, 2022

Ellen DeGeneres took a big risk when she advocated for a major change to her leading character on “Ellen.” Decades later, it’s easy to forget just how impactful that move really was.

The name “Ellen DeGeneres” brings up mixed feelings for some. On the one hand, there’s her comedy – both as a talk show host and in other roles. Younger audiences might remember her as Dory in the Finding Nemo films. She’s also known for the generosity she shows on The Ellen DeGeneres Show.

On the other hand, that reputation is tainted by the allegations that she contributed to a toxic working environment while leading the team at The Ellen DeGeneres Show. Many have speculated that these allegations are the reason the show is in its last season.

However, there’s another piece to DeGeneres’s legacy that we often forget about today.

It’s been 25 years since DeGeneres came out publicly through her sitcom Ellen – long enough ago that many people don’t remember the impact she had on LGBTQ+ representation in media. Before “The Puppy Episode,” – a two-parter in which her character, Ellen Morgan, comes out as a lesbian – a queer character had never lead a TV show.

Ellen DeGeneres Advocated for her Character to Come Out

Leading up to “The Puppy Episode,” Ellen was suffering from a general lack of focus. Ellen Morgan didn’t seem all that interested in dating. This was a common sitcom trope of the time, and in its place, Disney executives suggested that the character get a puppy. “The Puppy Episode” got its name in part as a nod to the exec’s suggestion and in part to keep the contents of the two-part episode a secret.

In 1996, DeGeneres started advocating for her character to come out as a lesbian. In September of that year, news of the ongoing negotiations leaked. The public started speculating whether Ellen Morgan or Ellen DeGeneres was going to come out of the closet. DeGeneres co-wrote “The Puppy Episode” alongside the usual team of writers.

The Episode of Ellen That Made TV History

“The Puppy Episode” starts with Ellen Morgan getting ready for a dinner date with an old college friend, Richard. Ellen’s friends call out to her from the living room, asking when she’ll “come out already,” to which she replies that she has a whole hour to do so.

Richard is a TV reporter and introduces Ellen to his producer Susan, played by Laura Dern. Ellen and Susan hit it off immediately, with Richard becoming the odd man out in the conversation.

Later in his hotel room, Richard flirts with Ellen. Ellen gets uncomfortable and turns him down, ending up in Susan’s room. Susan admits that she’s a lesbian and had assumed that Ellen was also gay. This rattles Ellen. She makes the accusation that Susan is trying to recruit her to lesbianism. Susan jokes that she was just one recruit away from earning a toaster oven. Ellen goes back to Richard’s room and kisses him.

The next day, Ellen lies to her friends and says that she and Richard slept together. She later admits the truth to her therapist, played by Oprah; despite her best efforts, she couldn’t bring herself to sleep with Richard. She adds that she just doesn’t “click” with him. Her therapist asks whether she’s ever “clicked” with someone, and what his name was. Ellen says, “Susan.”

At home, Ellen receives an answering machine message from Richard saying that he’ll be leaving town early. Ellen hurries to the airport; her friends think she’s trying to find Richard, but she’s actually looking for Susan. After struggling to say the word, Ellen admits to Susan that she’s gay. The first half of the episode ends with Susan telling Ellen that she’ll be in town for a few more days.

The second half of the episode begins with an anxious dream sequence, in which Ellen shops at the grocery store and everyone knows she’s gay. After discussing the dream with her therapist, Ellen is convinced to come out to her friends.

Her friends all react differently to Ellen being a lesbian. Two of them are completely supportive, while another is clearly making an effort to be okay with it. Another friend implies that being a lesbian is titillating, while still another collects money, having won a bet about Ellen’s sexuality.

RELATED: 22 Lady Gaga Quotes that Will Encourage You to Always Be Yourself

Later, Ellen introduces Susan to her friends at the bookshop she manages. There, Susan admits that she’s already in a relationship. Ellen is clearly crestfallen, and Susan leaves. Her friends later take her to a lesbian coffee shop, where another patron flirts with her friend. Ellen remarks that some things, at least, never change.

The episode hilariously ends with Melissa Etheridge confirming that Ellen is gay, having her sign an attestation to that fact, stamping the paperwork, and presenting a delighted Susan with her toaster oven.

The Cost of “The Puppy Episode” for Laura Dern

It was a long time before Ellen DeGeneres spoke about the backlash she faced after “The Puppy Episode.” In a monologue on her talk show in April, she admitted, “When I came out, people warned me that it was going to ruin my career, and they were right for a while. Actually, for exactly three years, I lost my career. But look at me now.”

DeGeneres’ co-star Laura Dern, on the other hand, has been very vocal about the effect the episode had on her life and career. Dern told New York Magazine that she “didn’t think twice” about taking on the role of Susan for the episode. Once she did, though, she was met with concern by those around her. “A lot of people in my life were really worried,” she said.

During filming, the set had to be cleared due to a bomb threat. After the episode aired, Dern started to receive personal threats. “We all spent the next couple of years really struggling in work and safety,” Dern recalled. “It was radical to experience that. It was the only time I ever experienced having to have full security detail.”

On top of that, the role of Susan affected her career moving forward. In the 1990s, Dern’s career was taking off after playing Dr. Ellie Sattler in Jurassic Park. But after “The Puppy Episode,” she received fewer roles. Dern would later admit on The Ellen DeGeneres Show that she didn’t work for a solid year and a half after the episode aired.

How Ellen DeGeneres Changed the Game for LGBTQ+ Representation on TV

Anticipation for “The Puppy Episode” was high. Once it was in the works, the Gay and Lesbian Alliance Against Defamation (GLAAD) started a “Let Ellen Out!” campaign. There were also negative responses to the episode. Building up to it, DeGeneres was followed to set by a strange man and producers received threatening phone calls.

“The Puppy Episode” was easily the most successful episode of Ellen. An estimated 42 million people tuned in to watch it, and the episode won several awards, including the Peabody Award.

More than that, “The Puppy Episode” was the beginning of positive queer representation on television. Subsequent shows like Will and Grace, The L-Word, and Modern Family all owe a debt of gratitude to “The Puppy Episode” for breaking down barriers and leading the charge towards normalizing queer lives and queer relationships both on screen and in real life.

Teen Gets Bullied For Being Gay, Fights Back And Gets Outpouring Of Support