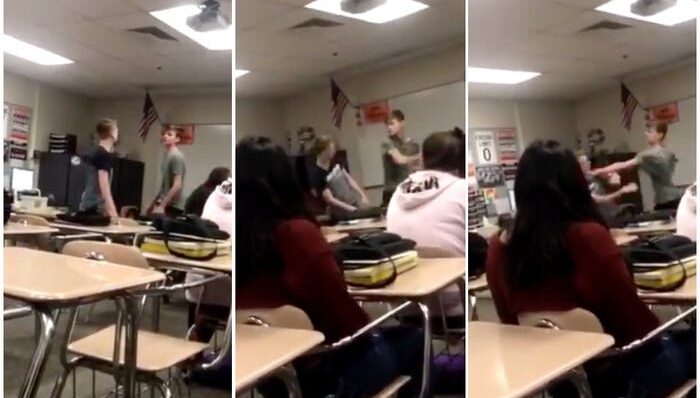 Teen Gets Bullied For Being Gay, Fights Back And Gets Outpouring Of Support

After years of abuse, a gay teenager lost his cool and finally fought back. But while violence is rarely the
By Joel Balsam    April 22, 2021

After years of abuse, a gay teenager lost his cool and finally fought back. But while violence is rarely the answer, standing up for himself was the right thing to do.

Kids can be so mean

Ever since he came out as gay in seventh grade, Jordan Steffy, a student at LaPorte High School in Indiana, was bullied relentlessly. His classmates spewed hateful slurs and even threw food at him in the cafeteria.

But when a fellow student posted a homophobic message on Snapchat, Steffy had finally had enough.

“He made an anti-gay post with a picture of me on it saying how he hated gays and a bunch of throwing up emojis all over it,” Steffy told Insider in 2019. “I walked up to him and said ‘Why did you post this?’ He said ‘It was just a post.’ And I said ‘Well, it’s not just a post. It’s a post about me, saying how you dislike who I am, and I don’t appreciate that.'”

The other boy went on to say: “‘Okay, but what are you going to do about it?'”

To which Steffy retorted: “‘I’m not going to deal with this, this is the last time I’m called anything.’ And then he said ‘What are you going to do about it, faggot?’ And that’s when I was like ‘No, I’m not doing this.'”

A video posted to Twitter (that has since been deleted), reportedly showed the two students yelling at each other before Steffy shoved the other boy.

“I just got sick of it,” he said. “It’s crazy the amount of hatred I received just for liking who I like and being me.”

The fight was quickly broken up and Steffy was taken to the principal’s office where he was told he’d be suspended.

Meanwhile, the Twitter post went viral with more than 2 million views — and the comments largely praised Steffy for standing up for himself.

The school failed him

But it didn’t have to get to the point of violence. Steffy said he consistently reported the abuse he was facing to the school, yet he was ignored.

“It seemed like I was getting in more trouble for reporting it than I was if I didn’t say anything at all,” he told Insider. “It was doing me more harm than it was good.”

So even though he was suspended and had to miss the school dance, Steffy felt he did the right thing.

“If I could take it back, personally, I would,” he told Insider. “But I’m glad I stood up for myself. If you were in my shoes, you’d probably get sick of it and you’d want to stand up for yourself.”

Bravery comes in many forms

Of course, violence is a last resort. But when you’ve been verbally abused and humiliated for so long, you can’t blame Steffy for standing up for himself. Hopefully, the boy who posted the hateful messages — and the school that ignored the student — have learned a valuable lesson in right and wrong.