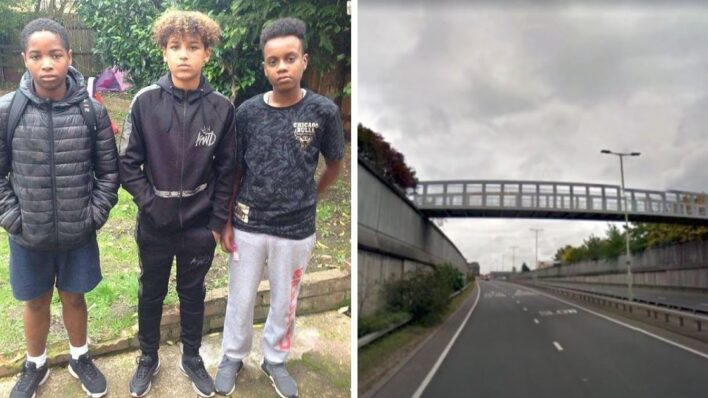 Devonte Cafferkey, Sammy Farah and Shawn Young showed exceptional bravery when they jumped to the rescue of a man who was about to jump off a bridge.
By Aly Walansky    July 28, 2020

Devonte Cafferkey, Sammy Farah and Shawn Young showed exceptional bravery when they jumped to the rescue of a man who was about to jump off a bridge.

Teens are normally wrapped up in school or sports, and gratefully don’t have to deal with life or death situations often. But when they do, they can sometime surprise us with their quick wit and judgment.

This is the case of these three boys, who when they encountered a very precarious sight, knew just what they had to do!

They saw a man about to end his life

Devonte Cafferkey, 13, Sammy Farah, 14, and Shawn Young, 12, were walking home from school, when they saw a 21-year-old man sitting on the edge of an overpass with a rope around his neck.

It was clear the man was about to take his own life, but the boys did not think twice. They quickly acted to stop him, trying to keep him from the edge by talking to him.

“We saw him on the other side of the bridge and then he had a rope around his neck. And then me and Sammy, we grabbed him and pulled him back,” Shawn told Steve Harvey.

The experience could not have been easy for the young boys. When Steve asked Sammy, “were you worried about saying the wrong thing?” he replied with the following:

“Yeah, I was worried. I was crying. I don’t see anyone dying. We told him that you have a family. Don’t do this, you are young.

When he decided to jump anyway, they grabbed onto him, preventing him from jumping. It was no easy task for the three kids.

“The man was passing out and got heavier for them,” Shawn’s mother, Carol said.

Shawn then called for help, and ultimately the man was rescued before he could do any further harm to himself.

The three children are heroes and saved a life. In fact, they were recognized for their bravery by the Royal Humane Society, with certificates signed by no other than the Queen of England.

“I am extremely proud of all three of them, they are all good boys and it’s nice that they are getting recognized for doing something good in the community,” Carol said.

They made their parents proud

Carol also said the boys have been very mature and taken all the attention in stride. They “just got on with it,” she said.

“They were coming from school and loitering around, Shawn was telling them to hurry up,” said Shawn’s mom. “If they had been messing around a bit longer, who knows what they would have come and met instead?

I feel like they were meant to be there to help him.

Carol to The Daily Mail

When Shawn came back that day, he told her the whole story. Carol was amazed at the bravery her boy had shown.

I let him finish the whole story and the whole way through I was smiling because there was nothing I could add to it.

A passerby helped the three boys

A passerby, Joanne Stammers, helped the boys rescue the man. Another man, James Higlett, also offered his assistance. Together, they made sure the young man would live to see another day. As it happened, he later “came to [Shawn’s house] and apologized,” for putting them through it.

The three boys’ incredible bravery also disproves our misconceptions about the youth. Where young boys can be portrayed or seen as troublesome, these three have shown us that children are just as capable of doing the right thing.

Quite often in the national news there are a lot of negative reports about young people so it is nice to have something positive. They are very young and I marvel at how they are all dealing with it.

Never underestimate the power that you may have to make a difference, no matter how young or small you may be. These boys are still in grade school and they saved a life.