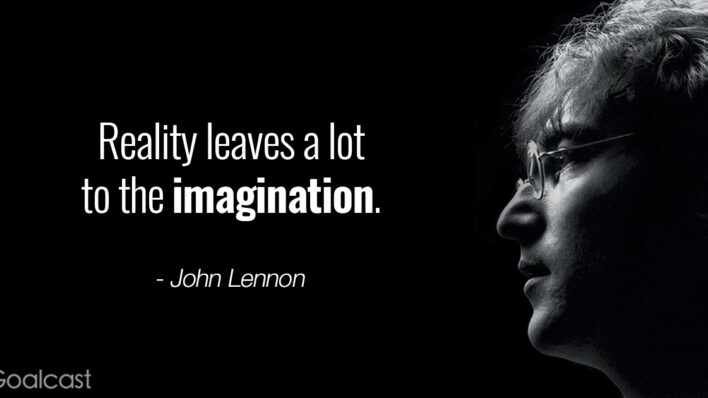 49 Powerful Quotes from John Lennon to Live and Love By

Lennon’s parents were married briefly and at the age of five he was forced by his father to choose his favorite parent, only to end up living and being raised by his aunt Mimi Smith. However, his mother visited him regularly and taught him to play the banjo and the piano.

After helping create the first British band to break out big in the United States and enjoying a massive success, Lennon decided to leave the group and start a solo career with the help of his second wife, Yoko Ono. The two also invented a form of peace protest by staying in bed while being filmed and interviewed.

In 1971, Lennon released his second solo album “Imagine,” which quickly became a commercial success. He belonged to a time when pop artists embraced their roles as social and cultural influencers, and used the podiums granted them by their celebrity to shape our values and vision for a better world.

Tragically, in 1980 Lennon was shot and killed outside of his apartment building in New York by a deranged fan. His death saddened millions of fans worldwide and had a major impact on pop culture.

Of all these dreamers and darers, few had a voice as passionate or powerful as John Lennon’s, who continues to inspire countless millions decades after he was stolen from us before his time.
Here are 18 Powerful John Lennon Quotes to Live and Love By — and to help us remember this giant of music who always reminded us to believe in our better angels.

49 Powerful John Lennon Quotes to Live and Love By

There are two basic motivating forces: fear and love. When we are afraid, we pull back from life. When we are in love, we open to all that life has to offer with passion, excitement, and acceptance.

Time you enjoy wasting, was not wasted.

If everyone demanded peace instead of another television set, then there’d be peace.

We live in a world where we have to hide to make love, while violence is practiced in broad daylight.

Reality leaves a lot to the imagination.

When I was 5 years old, my mother always told me that happiness was the key to life. When I went to school, they asked me what I wanted to be when I grew up. I wrote down ‘happy’. They told me I didn’t understand the assignment, and I told them they didn’t understand life.

Turn off your mind, relax, and float downstream.

I believe in everything until it’s disproved. So I believe in fairies, the myths, dragons. It all exists, even if it’s in your mind. Who’s to say that dreams and nightmares aren’t as real as the here and now?

Everything will be okay in the end. If it’s not okay, it’s not the end.

We’ve got this gift of love, but love is like a precious plant. You can’t just accept it and leave it in the cupboard or just think it’s going to get on by itself. You’ve got to keep watering it. You’ve got to really look after it and nurture it.

When you do something beautiful and nobody noticed, do not be sad. For the sun, every morning is a beautiful spectacle and yet most of the audience still sleeps.

We need to learn to love ourselves first, in all our glory and our imperfections. If we cannot love ourselves, we cannot fully open to our ability to love others or our potential to create. Evolution and all hopes for a better world rest in the fearlessness and open-hearted vision of people who embrace life.

I’m not going to change the way I look or the way I feel to conform to anything. I’ve always been a freak. So I’ve been a freak all my life and I have to live with that, you know. I’m one of those people.

If everyone could just be happy with themselves and the choices people around them make, the world would instantly be a better place!

Declare it. Just the same way we declare war. That is how we will have peace… we just need to declare it.

Count your age by friends, not years. Count your life by smiles, not tears.

Being honest may not get you a lot of friends but it’ll always get you the right ones.

Love is a promise, love is a souvenir, once given never forgotten, never let it disappear.

Everybody loves you when you’re six foot in the ground.

Trying to please everybody is impossible – if you did that, you’d end up in the middle with nobody liking you. You’ve just got to make the decision about what you think is your best, and do it.

A mistake is only an error, it becomes a mistake when you fail to correct it.

Our society is run by insane people for insane objectives. I think we’re being run by maniacs for maniacal ends and I think I’m liable to be put away as insane for expressing that. That’s what’s insane about it.

As usual, there is a great woman behind every idiot.

One thing you can’t hide – is when you’re crippled inside.

It’s better to fade away like an old soldier than to burn out.

There are no problems, only solutions.

Love is all you need.

Surrealism had a great effect on me because then I realized that the imagery in my mind wasn’t insanity. Surrealism to me is reality.

For those of you in the cheap seats I’d like ya to clap your hands to this one; the rest of you can just rattle your jewelry!

How can I go forward when I don’t know which way I’m facing?

My role in society, or any artist’s or poet’s role, is to try and express what we all feel. Not to tell people how to feel. Not as a preacher, not as a leader, but as a reflection of us all.

Nobody controls me. I’m uncontrollable. The only one who controls me is me, and that’s just barely possible.

What we’ve got to do is keep hope alive. Because without it we’ll sink.

Everything is as important as everything else.

There’s nothing you can know that isn’t known.

Only by trying on other people’s clothes do we find what size we are.

Produce your own dream. It’s quite possible to do anything, but not if you put it on the leaders and the parking meters.

I don’t believe in killing whatever the reason!

You may say I’m a dreamer, but I’m not the only one. I hope someday you’ll join us, and the world will be as one.

It’s weird not to be weird.

Get out there and get peace, think peace, and live peace and breathe peace, and you’ll get it as soon as you like.

When I cannot sing my heart, I can only speak my mind.

Happiness is just how you feel when you don’t feel miserable.

If you want peace, you won’t get it with violence.

Art is only a way of expressing pain.

You’re all geniuses, and you’re all beautiful. You don’t need anyone to tell you who you are. You are what you are.

I am a violent man who has learned not to be violent and regrets his violence.

You’re just left with yourself all the time, whatever you do anyway. You’ve got to get down to your own God in your own temple. It’s all down to you, mate.

The more real you get, the more unreal the world gets.