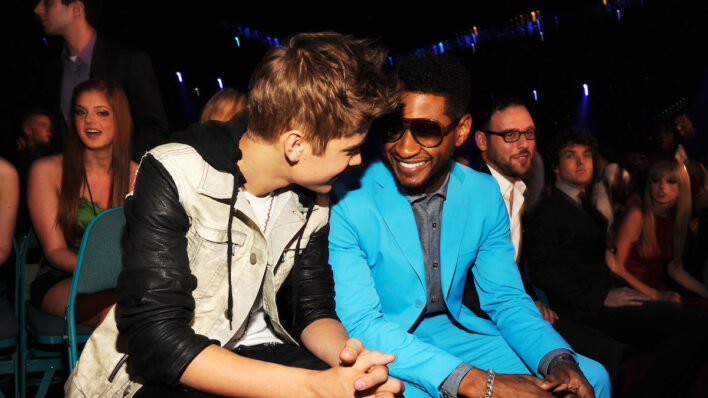 The Truth Behind Justin Bieber’s Unlikely Friendship With Usher

When Justin Bieber was at his most hostile, did Usher ever stop and wonder about the monster he inadvertently created? Did their relationship ever recover?
By Shaoni Das    October 12, 2021

When Justin Bieber was at his most hostile, did Usher ever stop and wonder about the monster he inadvertently created? Did their relationship ever recover?

Under the R&B singer’s tutelage, Bieber was able to make the jump from an aspiring YouTube cover singer to a bonafide teen idol with millions of zealous fans across the world. Usher essentially discovered a diamond in the rough and transformed him into a global phenomenon, a prominent cultural figure who’s said to have surpassed his mentor in a myriad of ways.

At the same time, the Justin Bieber of today is a far cry from the baby-faced, innocuous boy from Ontario who just wanted to sing his heart out for anyone who would care to listen. For a while, he’d been a villain in the press, hurtling through a series of bad decisions, dangerous misadventures, and legal quagmires involving alcohol, police altercations, and drugs.

When Justin Bieber was at his most hostile, did Usher ever stop and wonder about the monster he inadvertently created? Furthermore, did he feel responsible in the least?

Usher and Bieber’s unique friendship commenced around 2007-2008 after the latter’s YouTube videos picked up a bit of steam across social media. Scooter Braun invited Justin and his mother to fly down to Atlanta for an unofficial trial period and to meet with record executives in the music industry. It was during this search where Justin was introduced to Usher, who immediately took a liking to the young man. Usher arranged an audition for Justin with L.A. Reid and played an instrumental role in the teen singer’s eventual record deal with Island Def Jam Recordings. Recollecting their initial meeting, Usher said, “I said to him, ‘Why don’t you set up a meeting between me and your manager, I’d love to meet with you and do this in a formal setting,’”

There was something really eager and something so poised to be something. I didn’t know what he would be but I knew I wanted to be involved.

At first, Usher had been in awe of young Justin and his deft ability to “produce that magic.” He sang endless praises of his protégé, praised his eagerness and preparation, and went so far as to collaborate with him for a number of singles and live performances. Hollywood had had a new dynamic duo, and it felt like there was no stopping their powerful friendship.

However, as Justin Bieber rose higher and higher into the stratosphere, and subsequently spiraled deeper and deeper into bad behavior, there was a shift in the relationship. “Our relationship is more man-to-man now. He’s making his own decisions and it’s important to show support,” said Usher. The Yeah crooner clarified that he doesn’t endorse Justin’s actions, but he understands it’s imperative to extend support to a young kid struggling to find his way in his madcap universe.

I can say I’m not happy with all the choices my friend has made, but I’m supportive of him. I try my hardest to give as much positive reinforcement as I can. I’ll punch him in the f***ing chest when I need to, and give him a hug and kiss when I need to.

Usher told Billboard he’ll “punch” Justin if need be, but if the boy is truly faltering and lost, he’ll “give him a hug and kiss.” When you’ve basically become family, you need to exercise sensibility. You can’t excuse their misconduct, but you shouldn’t give up on them either. It’s crucial to continue with “positive reinforcement,” as per Usher because that’s how you’re still able to bring them back to the surface.

Usher told Howard Stern in 2016 that everyone has “moments” and he can’t necessarily interfere in Justin Bieber’s personal life, as much as he feels inclined to. Usher himself has run the gamut of fame, from shameful, egotistic displays in his youth to compassionate, impactful activism in his recent years. He knows all too well how people, if left unguided, will slip up; the world of celebrity is rife with vices and temptations, so you need an anchor to keep you moored and composed.

You’re gonna have moments. And if he does, I can only show him the reality of what has happened … of course we’ve had stern talks.

Usher on The Howard Stern Show

All Usher can do as a mentor is present his perspective; it’s completely up to Justin whether he heeds the advice. You can only meddle in someone else’s business to a certain extent because, at the end of the day, they make their own bed and have to live with their own mistakes. It’s hard to say whether Usher’s “stern talks” had an effect on Justin’s demeanour — it was a while before Justin realized the errors of his ways and expressed regret — but as a mentor, he was in a unique position to help Justin. He’s been there from the beginning, he understands “nobody’s perfect,” he told Howard Stern.

Ultimately, Justin did course-correct, perhaps because of timing, reflection, or the arrival of Hailey Baldwin. Today, he and Usher remain close friends and confidantes. He attended the younger man’s wedding to Hailey, played ‘Spill The Tea’ with him on The Ellen Degeneres Show, and has shown support for the star in public.

In 2020, Usher congratulated Justin for his new album, Changes, and said he’s seen the latter go through “some very, very complicated times” in recent years. As a result, he couldn’t be happier that Justin is returning to doing what he loves. The 42-year-old also discussed fame in general and how it can place an enormous amount of “pressure” on young artists. The “scrutiny” can be insurmountable, but the fact that Justin Bieber has managed to rehabilitate his lifestyle, find love, and continue making music with as much enthusiasm and focus as ever is nothing short of remarkable.

[Fame] is such a beautiful thing, but the pressures that come with that and the reality of how hard it is to live under that type of scrutiny is a lot. The fact that he has been able to manage to make it back, to put out another album, and share yet another piece of his life.

Don’t be afraid of tough love

The real ones will always stick it out till the end, but don’t be under the impression they will condone everything you do. They will dole out tough love here and there — that’s how you know they really have your back. Your loved ones, whether it’s friends, families, neighbors, or co-workers, know what you’re truly capable of, so they aren’t here for poor decision-making. They will find a way to show you support when you lack some, but they’ll also call you out when you’re messing up.

The tough love, if expressed rationally, will eventually strengthen your resolve and character. It will demonstrate where you’ve blundered, and it will also create a roadmap for inner growth and contemplation. So appreciate those who are there for you and embrace their interventions, when appropriate.