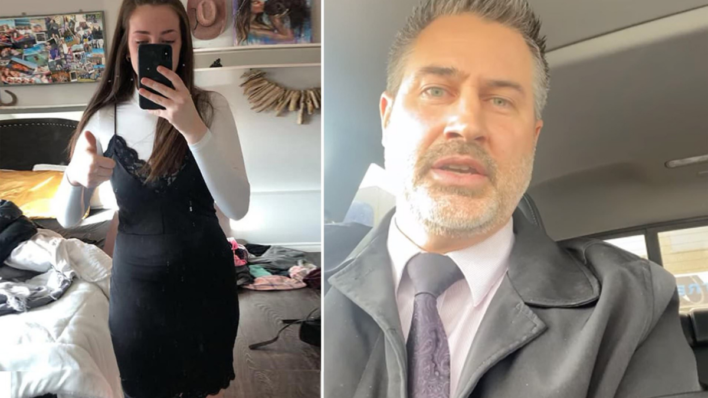 Apparently, a dress with a turtleneck underneath it is too distracting for a Canadian school’s male teachers. Sent home in
By Joel Balsam    May 13, 2021

Apparently, a dress with a turtleneck underneath it is too distracting for a Canadian school’s male teachers.

Karis Wilson, a 12th Grade student at NorKam Secondary in Kamloops, British Columbia, was told her outfit — a black knee-length dress over a white turtleneck — made the teacher and his assistant (also male) uncomfortable. So, they sent the 17-year-old student to the principal’s office and she was told to go home.

According to her dad, Christopher, she cried the whole way.

“I’m disappointed in the system,” he said in a Facebook video, according to CTV News.

“She’s wearing a turtleneck, under a black dress that goes to her knees,” he added. “This is absurd.”

Wilson said he spoke with the school principal and asked for their dress code and was shocked to see that it said “not to wear clothing that is distracting to teaching or learning.”

“Change needs to happen,” Wilson said. “You can’t talk to students like this. These are little humans that you’re supposed to get excited about learning and the rest of their life, not demoralize them, beat them down and send them home.”

Christopher said that his daughter was on board with her father sharing his disappointment. “She said, ‘You know what, it’s OK because if we make any change for someone that comes behind me, then it’s worth it.’”

The school district has its tail between its legs

A representative for the Kamloops School District told CTV that they were “concerned about these allegations and are treating them seriously.” However, it wouldn’t share a copy of the school district’s dress code despite repeated requests.

“Whenever a parent is concerned about their child at school we want to work with them for the best outcome for the student.”

Unsatisfied, students gathered outside the school for a small protest where they chanted: “I stand with Karis.”

And it seems that the protest worked. In April, InfoNews.ca reported that the district is in the process of revamping its dress code and has already removed the part that says clothing “worn in a way that detracts from the teaching/learning process” is forbidden.

The fact that this teenager was sent home for wearing a turtleneck is absurd, but the main thing to take away here is that women and girls cannot be blamed for what they wear because it makes men “uncomfortable.” That is sexism, plain and simple.

You’d think that society should know that by 2021, but clearly there’s still work to be done. Fortunately, this school district seems to have changed course — but only thanks to Karis and her dad for doing the right thing and speaking out.