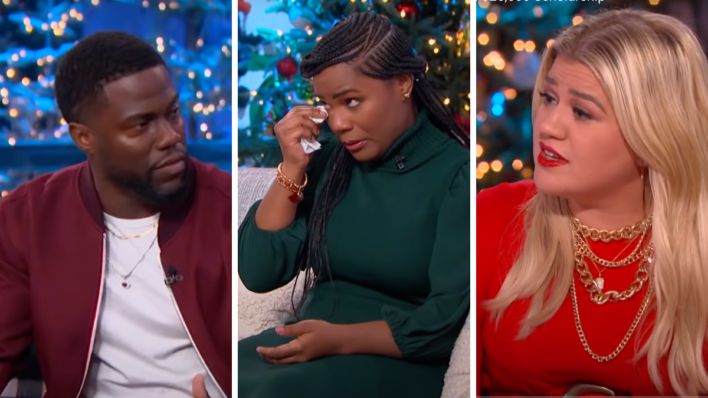 Kevin Hart and Kelly Clarkson team up to shock one struggling mother with $25,000 for school and a newly furnished home.
By Bryan Liquor    March 7, 2022

Kevin Hart and Kelly Clarkson team up to shock one struggling mother with $25,000 for school and a newly furnished home.

Single motherhood is a tough trial for anyone, however it weighed especially heavily on 25-year-old Andrea Luckey.

As a guest on the ‘Kelly Clarkson Show,’ Luckey recalled her hardships.

Along with her 6-year-old son Taylor- who she affectionately calls ‘my bodyguard’- her younger boy Mozzi has special needs due to sensory issues and requires extra attention.

Meanwhile, Luckey uses all of her free moments towards studying to be a nurse, with motivation for a better future. They all lived in a single room at her parents’ house shared with ten other people.

When asked by Clarkson how she manages, Luckey was stoic. “I just get up every day and try to keep my head up and remain positive and do what I have to do, it’s very hard,” she said.

Then, as if she needed it, Luckey shared another life setback: She recently found out that her financial aid wouldn’t cover her last year in nursing school. With no scholarship options and subpar credit, she was facing dropping out of nursing school and dreams for a better future.

Broken, Luckey confided that her self-esteem was crushed.

I’ve been really depressed about it. A few days ago I had to go in my closet and cry because it makes me feel like a failure as mother.

However, Clarkson and Luckey weren’t alone on the show. Joining them was none other than acclaimed comic and Jumanji star, Kevin Hart.

Like Luckey, Hart was born in North Philadelphia, himself raised by a single mom.

He started by lauding Luckey’s resilience and success as a mom.

“You’ve already done a lot, you’ve already checked a lot of positive boxes,” he said. “And I think sometimes it’s important to really recognize and realize what’s happened before we focus on the thing we feel hasn’t happened.”

With that, Hart ushered in his first surprise, as oodles of toys and clothes for her two boys were brought out to a shocked Luckey.

However, that was just the trailer. Hart then revealed that they would pay her $25,000 tuition for her final year of nursing school, along with some reassuring words.

And right now, listening to you talk today and mustering up the energy to tell your story while trying to hold back emotion, you’re more than deserving of this moment. You’re more than prepared to finish your task become one of the best nurses you can be.

Hart wasn’t done though; had one more act up his sleeve. “I think there’s another level that can be reached,” said Hart, looking over at a grinning Clarkson.

Then a screen flashed on, giving Luckey a tour of her newly remodelled and furnished two-bedroom apartment, free for a whole year. Luckey was brought to tears as the duo gave her a tour of her new home, complete with bunk beds for her boys and her own room and space where she could study.

To put a bow on it, bursting into the scene were Luckey’s children, Taylor and little Mozzi, excited to explore their new home.

A stunned Luckey was full of gratitude. “I am just blessed and grateful, I did not expect this. Thank you from the bottom of my heart,” she said.

Hart reminded Luckey and the audience that the true gift is its message.

When it feels like everything’s crumbling around you, it’s hard to see the light through the debris. Yet, when we’re just crazy enough to remain positive and push forward, it tends to shine through.