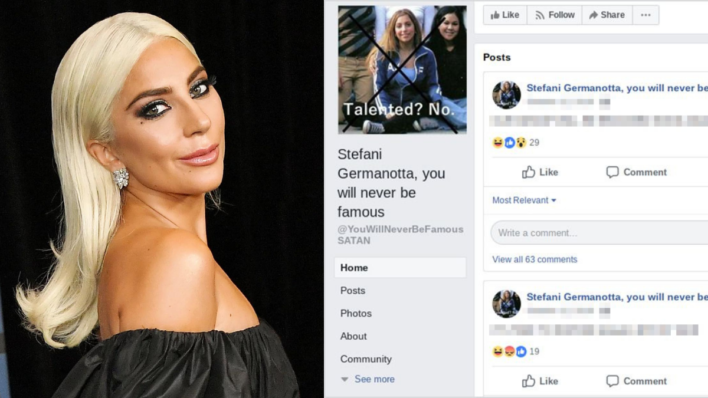 Lady GaGa had been told that she would never be famous, so she proved her bullies wrong by making history.
By Shaoni Das    June 29, 2021

Lady GaGa had been told that she would never be famous, so she proved her bullies wrong by making history.

Who among us has endured bullying as a child?

The phenomenon of getting bullied is so commonplace that it’s often packaged as a fundamental piece of growing up, the essential requirement that’s supposed to fortify your spirit and equip you for the vicious, unyielding “real world.” Only, as cruel and desolate adulthood can be, it can never quite match the debilitating traumas of our most formative years.

What’s unfortunate about being bullied at such an impressionable age is that you don’t have the awareness or the courage to recognize the severity of the situation. You simply believe this is how you’re supposed to get treated, that this is how you deserve to get treated, and so you cower in place and just bear it in the hopes that it would cease one day.

Lady Gaga faced a similar conundrum as a teenager as well, but ultimately, she didn’t have much trouble putting her bullies in their rightful place.

Lady Gaga’s peers laughed at her for her big dreams

The Mother Monster has always been candid about getting relentlessly bullied through high school and university.

We usually tend to approach her larger-than-life persona with preconceived notions about her background, but as it turns out, everyone’s high school tribulations are more or less the same — a regression to the mean, if you will.

As a teenager in New York City, Gaga, who was born Stefani Germanotta, just wanted to fit in with the crowd and squeak through the halls without being targeted as an object of ridicule. She’d been wildly talented and was already making headway across the local entertainment scene, yet her peers decided to cling to her most inconsequential features, such as her supposed  “big nose” and “buckteeth.” Others probed her over her music and theatre inclinations and derided her for unconventional makeup choices. She said she’d even get thrown into the garbage can occasionally.

I got really bullied. I had a nice group of friends, but getting picked on in school — it sticks with you for life and I don’t think I realized how deeply it affected me until I started to become more successful and suddenly there’s lots of pressure and you have to be a role model.

There’s an assumption that the bullying dissipates in college, as that’s where you’re supposed to find your own niche and participate in transformative adventures designed to push you towards self-actualization and emotional fulfillment.

Not so much for Lady Gaga, unfortunately. While studying at New York University (NYU)’s Tisch School of the Arts, her fellow undergraduates cast aspersions on her musical abilities, teasing her for aspiring to be a professional singer. They belittled her dreams and made her think she wouldn’t ever be good enough to land a record deal or put her music out to the world. As if their nasty remarks weren’t enough, they went so far as to make a Facebook page titled, ‘Stefani Germanotta, you will never be famous.’

Lauren Bohn, an NYU alum and Gaga’s classmate, detailed the Facebook group’s activities, stating the naysayers used the platform to slut-shame the singer and call her derogatory names. She recalled one classmate “posting a flyer for one of her upcoming gigs at a local village bar. He had clearly stomped on the flyer, an outline of his muddy sole struggling to eclipse her name.”

It’s safe to say that Gaga’s tormenters have eggs on their faces fifteen years on. Yet, while Gaga may have taken the crown and triumphed over her bullies, not everyone strikes gold in their twenties in such a scintillating, extraordinary fashion. This is partly why Gaga has been a vocal advocate of launching anti-bullying initiatives across public and private institutions — not everyone will be able to counter their bullies and therefore have to rely on external support and prevention.

She has discussed how the scars of bullying are somewhat permanent, and that you often don’t comprehend how deep they run until you’re placed in a position to comment on the subject. Nobody enjoys reliving their most painful memories, but it’s vital to continue conversations about the far-reaching consequences of childhood bullying. When a public figure lays their insecurities bare in such a thoughtful and considerate way, it means something to the youth who suffer similar ordeals day in and day out. Lady Gaga’s vulnerabilities not only build a bridge of relatability but inspire hope among her fans that someday, it will get better.

No child should have to sit alone at lunch or constantly be outcast. Let’s empower each other to be kinder and braver.

It helps that some of those who mistreat their classmates in school eventually mature and may begin feeling an inkling of guilt. It obviously doesn’t justify their oppressive actions, but it does speak to the nature of high school dynamics, and the ‘kill or be killed’ mentality that it breeds. Everyone’s so hell-bent on fitting in that they might not want to jeopardize their social status to offer a helping hand to the outcasts. And if they do, they might get lumped in with the ‘losers’ and suffer the same fate.

Lady Gaga may be one of the most iconic women to ever exist in music, but global stardom incites a whole other form of public judgment and shaming. When Gaga first burst onto a scene as an outlandish, kooky oddball ready to disrupt the status quo, she’d realized what it felt to be mocked yet again. “It was like I was being bullied by music lovers,” she said, “because they couldn’t possibly believe that I was genuine.”

That’s when she started recollecting the horrific memories of her adolescence and became conscious of the work she needed to do to heal. It’s all about “becoming stronger and becoming more brave,” she said in an interview.

Bullying really stays with you your whole life. And it really, really never goes away. And I know you’re using words like ‘superstar’ and ‘most-googled’ and ‘billions of YouTube [views].’ But I was never the winner. I was always the loser

Lady Gaga on Talks on Google

It’s near impossible to dismiss the hardship from the mind, but at least you can rest assured that you’re in a better place than you were today. However, it’s up to us to prevent history from repeating and ensure that the subsequent generations are educated on the toll bullying takes on its victims. Gen-Z has to reckon with the implications of social media and how it has this unique ability to destroy a person’s mental wellbeing bit by bit, so we have to go the extra mile to cultivate a kind and inclusive space that’s respectful to everyone.

Lady Gaga’s activism demonstrates how we can let our personal crises inform our choices and causes. We’ll have to find a way to live with the distress our entire lives, so why not use it to spread love and compassion everywhere we go?