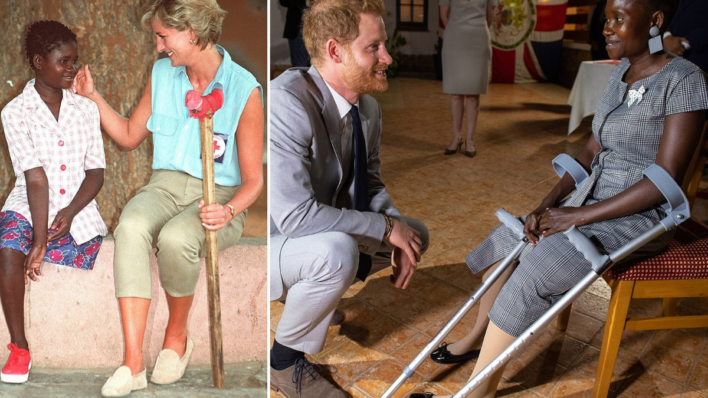 A long-awaited reunion Barely a day goes by when Prince Harry is not reminded of his mother Diana, Princess of
By Joel Balsam    August 19, 2021

Barely a day goes by when Prince Harry is not reminded of his mother Diana, Princess of Wales, who died tragically in 1997. But her memory was even more vivid during a 2019 visit to Angola.

There, he met Sandra Txijica, a landmine survivor who at 14 sat on the princess’ lap under a fig tree outside the city’s Orthopedic Centre. Months later, Diana died in a car accident.

Now, twenty-two years after their encouter, Harry met Txijica again in a special moment for both the prince and the Angolan, who is now 35 and walks with the help of a prosthetic leg from the center.

At a speech following the encounter, Harry said the meeting was “deeply personal and meaningful to him,” according to People.

“It has been an honor to retrace my mother’s steps today,” he added in his speech. “I lost her twenty-two years ago, but the memory of her is with me daily and her legacy lives on which is why I am so happy to name the center – ‘The Princess Diana Orthopaedic Centre.’ ”

Harry also spoke of the de-mining efforts in Angola that have taken place since his mother’s visit, which have made the city of Huambo much safer.

“Since my mother’s visit to Huambo so many years ago, this city has undergone such a visible transformation,” he said. “I am humbled and honored that my mother’s work and commitment to de-mining continues to inspire and that her legacy is being recognized and celebrated today with the naming of the center in her honor.”

For those who’ve watched The Crown, or at least seen the Oprah interview, it’s hard not to root for Harry. Born into an inhospitable, and discriminatory system, he eventually decided to exit with his wife Meghan Markle, who had a negative experience that was chillingly similar to that of Diana when she first entered the Royal Family.

Thoughts on the monarchy aside, it’s great to see Harry happy and following in his mother’s footsteps.