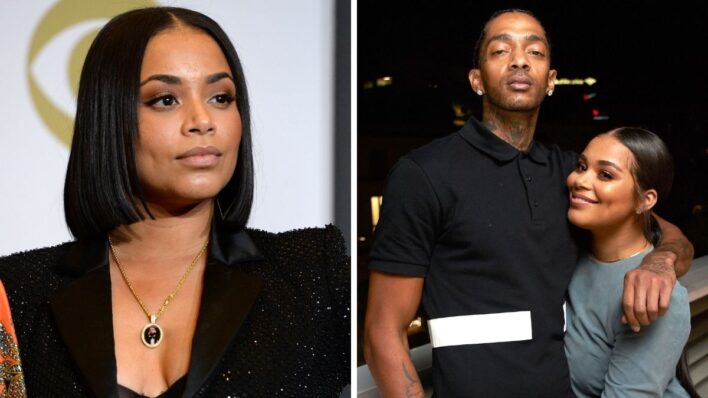 Lauren London returns to acting starring opposite Michael B. Jordan in Without Remorse after the death of her love, rapper Nipsey Hussle.
By Arielle London    May 4, 2021

Lauren London returns to acting starring opposite Michael B. Jordan in Without Remorse after the death of her love, rapper Nipsey Hussle.

Grief can take on many forms and has no expiration date. No matter how someone passes on from this lifetime, it is always a process for their loved ones to organically let them go. When someone is physically no longer here, we must reconfigure in our minds a space for them to reside. Our relationship with them may not even change at its core, but eventually it evolves as we grow stronger and more time passes from the day they left our sides.

On March 31, 2019, Lauren London’s world changed when her love, rapper Nipsey Hussle, was fatally shot outside his Marathon Clothing Company store in Los Angeles. Nipsey, born Ermias Asghedom, made waves in hip hop culture and beyond, but to Lauren, he was her “beloved.”

Lauren lost the love of her life

Speaking to a crowd at his Staples Center memorial in 2019, Lauren London describes Nipsey Hussle saying, “his soul was majestic, he was the strongest man that I ever knew, a gentle father, a patient leader, a divine light, he was brilliant.”

The love between Lauren and Nipsey is clear in how she speaks so highly of the late rapper but also how he spoke of her. In a GQ The Couples Quiz, when Nipsey was asked to describe Lauren in three words he chose, “charismatic, honorable, and emotional.” Throughout the quiz, the couple flirt back and forth, laugh and make each other smile. The chemistry between them was beautiful and genuine with a sense of closeness only reserved for those once in a lifetime loves.

After we lose someone so tragically, the moment often stands as a turning point in our lives. Do we continue on with the path we were walking before, or do we change course entirely? Do we shut down and shut out the world? If we do, when do we rejoin? Do we ever rejoin? There are so many questions going through a person’s mind at the same time as the pain, but life and divine timing can step in and give you the answers you were looking for.

After Nipsey Hussle’s death, a Michael B. Jordan movie with a relatable script came Lauren’s way via Jordan himself. Lauren London spoke with Entertainment Tonight about how she made her decision to return to acting in Without Remorse. Lauren says:

Michael reached out to me as a friend and he was so unsure if I was even going to ever work again.

Michael believed in the project and saw Lauren as being a part of the film. London tells ET, “And he was like, ‘Look, I’m unsure if this is what you want to do, but I have to follow my intuition, I have to ask you if can you just read the script.’”

It was definitely at a time in my life where I wasn’t sure if I was going to continue acting. If I was going to do it, I wanted to make sure that I was an authentic contributor.

Lauren read the Without Remorse script, where she plays the murdered pregnant wife of Michael B. Jordan’s character who passes on but visits and guides him in spirit, and decided she was in.

But she had another reason to get back into work

While the cathartic nature and relatability of the character was a major factor in her decision to work again, so were her children. Speaking on her two sons, Lauren tells ET “We can’t stop, you know? We do have a purpose, all of us, and it’s important for my sons to see me moving forward with grief, not just curling up in a ball, because I curled up in a ball for a long time.”

“Moving forward with grief” is an act of bravery many can relate to. Sometimes just getting out of bed after you have lost a loved one is a victory on a difficult day. There is no neat timetable for how and when you should grieve. There is also no predicting how dealing with death may change your outlook on life.

Life has changed for me in such a way that now I don’t want to just work to maintain a lifestyle. I want to work to have a true existence on Earth and to really be aligned with purpose.

Lauren tells ET that she believes in “divine order.” London says, “so I believe that everything happens for a reason.”

London says Hussle used to say, “you can’t possess people, that you experience them.” She continues, “and I’m so honored and blessed that I got to experience such a man.”

True love is rare. When we lose that person who made such a profound impact upon our lives we go through profound experiences. Nipsey Hussle was known for the depth in his lyrics and the impact he made both with his life and his death has been felt worldwide. But while the world lost a talented artist, Lauren London lost her “beloved.”

In a recent post on Instagram honoring Nipsey Hussle two years after his death, Lauren wrote, “The Day Of Ermias’ transition changed the course of my life forever. 2 years, and it feels like yesterday and eternity all at the same time. Grief and Healing have been constant companions on this journey.”

What we can learn from Lauren’s experience

Having faith in the universe and your purpose in life is important for continuing to walk our paths on this earth. Losing Nipsey Hussle may have made Lauren London question if she wanted to continue to act professionally, but ultimately it redirected her towards doing it with even greater intention. Her return to work, as many globally know, does not mean that she has stopped grieving or misses her love any less, but it means that she has chosen to “move forward.”

You don’t have to “move on” when someone close to you passes on, but to “move forward” is to choose to figure out life thereafter. Whatever life looks like when someone passes away, with its differences and its struggles, you are still presently here.

All of your goals and dreams, even those you envisioned doing with lost loved ones, do not all of a sudden disappear during the grieving process. They may have to be revised, or pondered, or even reassessed, but you are still you. That person is worth the effort, even if the effort at the beginning looks like getting out of bed in the morning, put in the time to take care of you and watch time take care of the rest.