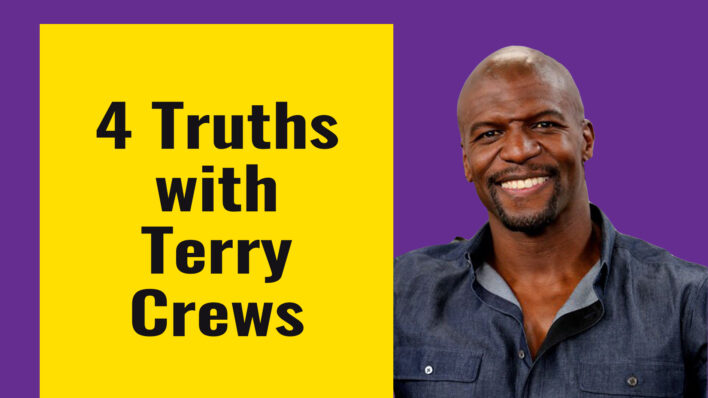 Let Mr. Old Spice Teach You a Thing or Two Mr. Old Spice, Terry Crews, is a man of many gifts.

But Terry’s success has not always come easy. Born in Flint, Michigan to an alcoholic father, Terry was determined to make a better life for himself and escape his abusive household. His big break came when he received an arts scholarship which was later followed by a full-ride athletic scholarship to Western Michigan University.

However, after retiring from the NFL in 1997, Terry felt stuck and at a loss.

His unemployed status propelled him into a deep depression. And to cope, he turned to food.

His late-night binging led him to gain 30 pounds. After losing control over his body, Terry vowed that he would never get to that place again, and started following a strict dietary and exercise regimen.

In 2014, Terry shocked fans with a secret he had been harboring for a long time. In his autobiography, Manhood: How to Be a Better Man or Just Live with One, he reveals his struggle with pornography addiction and the strain it put on his marriage and career.

Fearing he might lose his wife, Terry sought help by enrolling in a rehabilitation program. He now publicly shares his experience with addiction in hopes of de-stigmatizing and encouraging those affected to seek help.

Last year, Terry co-launched a design house, Amen&Amen, with fashion designer Nana Boetang. His foray into designing furniture was initially met with resistance by those around him, but he continued to persist, having made a habit out of pursuing his creative passions. Whether it’s painting, sketching, or acting – Terry continues to surprise us with his drive and ambition to prove the haters wrong.

Here are some of our favorite teaching moments with Terry Crews:

“Man, don’t ever let anybody talk you out of something like that again.”

“We don’t battle people. You battle mindsets that attempt to put people down.”

Be Happy and Dissatisfied

“My habit was taking me somewhere I didn’t want to go!”