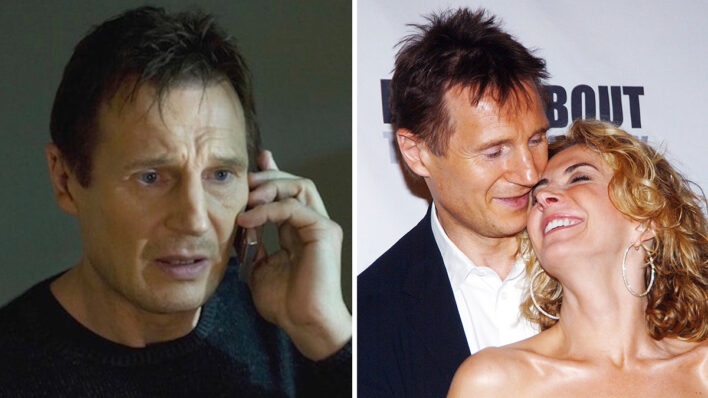 After 12 years, Liam Neeson is still dealing with the death of his wife Natasha Richardson. This is how he manages his grief.
By Shaoni Das    June 29, 2021

After 12 years, Liam Neeson is still dealing with the death of his wife Natasha Richardson. This is how he manages his grief.

Liam Neeson may have built his career off of playing tough, surly roles on-screen, but when it comes down to it, he is every bit the softie as the rest of us.

Though he’s been a professional actor for over forty-four years, it took the Taken franchise to catapult him to global stardom. As such, most modern audiences only started appreciating his talent in the last decade or so; they don’t have a solid grasp of the harrowing struggles he’s had to overcome up to this point. Chief among them is an immeasurable tragedy that turned his entire world upside down in a matter of days — on 18 March 2009, Liam’s wife, Natasha Richardson, passed away due to the injuries sustained in a skiing accident.

It’s been twelve years since her death, but as anyone who’s experienced a profound loss can attest, the scars don’t heal so easily. Nevertheless, Liam keeps chugging along and doing what he can to rebuild his life, bit by bit. Here’s what we can learn from his grief journey:

Liam speaks to this wife every day at her grave

Liam Neeson has opened up about his wife’s death on more than a few occasions, most recently while promoting his 2020 film Made In Italy. The film, which co-stars Liam’s eldest son Micheal, follows a father and son struggling to reconcile with the death of their wife and mother. As one can imagine, this hit quite close to home. Liam said that embodying the role of the grieving husband felt “cathartic in a way —the way in which art sometimes can be,”

Of course, they were “delicate emotional scenes” scattered throughout the film, but Liam stated he didn’t specifically have an issue with tapping into those nuances, and he figured Micheal didn’t have too much trouble, either. Ultimately, it turned out to be a transformational experience for the duo, allowing them to connect with each other on a more profound level and move forward through their grief journey.

Forging ahead comes with its own share of pains. With the passage of time, the memories become less concrete, and you have to rely on other people’s accounts to fill the gaps. “I haven’t really had clear dreams about Natasha,” said the Taken star. “Some people who were very dear friends of Natasha told me of their dreams.”

I speak to her every day at her grave which is about a mile and half down the road […] I go down there quite often, so I do speak to her as if she’s here. Not that she answers me.

Liam Neeson to The Inquirer

He also revealed that Natasha’s passing has caused him to contemplate the concept of heaven, hell, and the nebulous afterlife. He’d deviated from his Catholic faith in his twenties, but enduring the death of a loved one has empowered him to reflect on the deep, sweeping mysteries of the universe nonetheless.

However, as well-adjusted as you think you may be, the ravening grips of grief are always lurking nearby. Liam Neeson told Esquire in 2011 that one can never really prepare for grief and that it will strike in the most inconvenient of times and places, and you’re just going to have to roll with the punches. He thought he could just pre-plan his crying sessions and “get over it” at will. Unfortunately, there’s no point in delaying the inevitable, so when the agony suddenly pummels you in these instances, you just have to tackle the emotions as they flow through their natural course.

The tragic circumstances surrounding Natasha’s death only worsened the mourning process for her loved ones.

It was a completely unexpected occurrence, as Liam confirmed in his interview with CNN’s Anderson Cooper. Following her initial fall, which Natasha described to Liam as a gentle “tumble in the snow,” she refused medical attention and insisted she was well enough to go back to her hotel without further examination. She spoke to her husband over the phone and assured him of her good health. Sadly, Natasha was undergoing what medical professionals like to call a lucid interval, “a period when someone with a traumatic brain injury appears normal, but blood is building in the brain causing pressure which can be fatal.” Her head started throbbing soon after, and a second ambulance was called to her hotel in Montreal.

By the time Liam made it to the hospital, his wife’s condition had turned severe, and she’d been declared brain-dead. Liam had been quick to assess the situation and knew in his heart that his wife’s time on earth was coming to an end. The father of two told Anderson Cooper that he and his wife had made a “pact” earlier that if either of them were to decline into a vegetative state, the other would “pull the plug.” Liam detailed the final conversation he had had with his wife. “I went in to her and told her I loved her. Said, “Sweetie, you’re not coming back from this. You’ve banged your head.,” adding that he promised to bring her back to New York so that her family and friends could bid a proper farewell to the woman they loved.

The action movie star also revealed that he donated three of his wife’s organs — the heart, the liver, and the kidneys — a decision that would have made her “thrilled” and “pleased.”

The first couple of years were brutal for Liam, as he had to recalibrate his expectations and lifestyle to fit the needs of reality. He was a single father in his fifties raising two teenage boys; he had to figure out how he could console his children and restore his own mental health at the same time.

As what happens when a close companion perishes, Liam had felt her presence everywhere the first few years. For example, he’d become so used to the way she opened their front door that anytime he heard the same door opening, he felt a “profound feeling of instability,” where the world isn’t stable anymore, and there’s no way through the suffering. Thankfully, these debilitating moments become less frequent over time, and so Liam’s been able to get back on his feet and cope with his wife’s death at an appropriate pace. He also admitted the continuous work has also been a seismic factor in his bereavement process, claiming that he’s not “good without work” and that he’d likely be wallowing in sadness if he couldn’t work.

It was never real. It still kind of isn’t […] grief’s like– it hits you. It’s like a wave. You just get this profound feeling of instability. You feel like a three-legged table.  […] and then it passes and becomes more infrequent, but I still get it sometimes.

Grief is inevitable, but not endless

Liam put it best: you can’t prepare for grief. If you’re lucky enough not to have experienced it yet, it’s valuable to keep in mind that it’ll take shape in your life somewhere down the line. Yet, there’s no point in formulating a set strategy for weathering grief, as it’s a wandering beast that only acts on its whims.

The only thing you can do to prepare is not to prepare at all and cherish every day to the fullest. That doesn’t give you the right of way to engage in reckless, dangerous behavior; it should drive you to savor the moments you spend with your loved ones or the time you invest in your passions and hobbies. If grief can inspire you to live life with a fresh perspective, perhaps there are some silver linings after all.