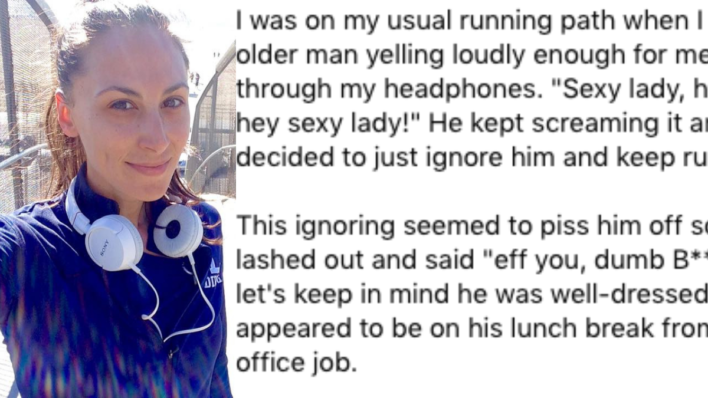 Little Boy Defends Jogger Against Catcaller, Sets A Precedent For All Grown Men

A young lad stepped in to fend off a businessman who was catcalling a jogger. Catcalled yet again Singer Julia
By Joel Balsam    March 11, 2021

A young lad stepped in to fend off a businessman who was catcalling a jogger.

Singer Julia Price was out for a run when something that frustratingly happens to women all the time occurred once again.

“I was on my usual running path when I heard an older man yelling loudly enough for me to hear through my headphones,” she wrote on a Facebook post in 2015. “‘Sexy lady, hey hey hey sexy lady!’ He kept screaming it and I decided to just ignore him and keep running.”

But the ignoring strategy didn’t work.

“This ignoring seemed to piss him off so he lashed out and said ‘eff you, dumb B****!’ Now let’s keep in mind he was well-dressed and appeared to be on his lunch break from an office job,” she wrote.

Using the ‘B’ word was her ‘trigger point.’

“I ripped off my headphones prepared to stand up for myself when this little boy who was walking alongside his mother and little sister in a stroller looked at the guy and said, ‘Hey. That is not nice to say to her and she didn’t like you yelling at her. You shouldn’t do that because she is a nice girl and I don’t let anyone say mean things to people. She’s a girl like my sister and I will protect her.'”

Incredibly, the cat-caller was “immediately embarrassed,” and started to leave.

Price went up to the mother and asked if she could hug the boy, named James, and hugged him (remember, this was well before we ever heard of something called COVID-19).

“I told him how grateful I was for him. He just shrugged and said ‘Well I just wanted to make sure your heart was okay,'” Price wrote.

“According to his mother, this is a typical day in the life of James,” she continued. “Thank you so much to the mothers and fathers who are raising the next generation to be brave and courageous, and to be little earth angels for all. I am so touched.”

The story went viral and even got the attention of Star Trek‘s George Takei, according to Inside Edition. “Chivalry is not dead, though it is coming from unexpected places.”

In another post, Price, further shared her appreciation for James.

“Yesterday I shared one of the most moving moments of my life, having no idea that James was actually a symbol of hope for all of us,” Price wrote. “I think that there’s a part of him that we all have in ourselves – that compassion and courage to stand up for others fearlessly, no matter what that looks like. I think we can look to James as an inspiration the next time we have an opportunity to be the brave one and help someone else.”

She continued: “Thank you for your thoughts and support of the little love warrior. I hope in some way he can feel how many people he has inspired. I hope he goes on to lead many movements and to protect all of his ‘sisters’ and of course his ‘brothers’ as well.”

“Thank you for sharing his message and celebrating his spirit with me!”

Hopeful for the future

Catcalling is a daily occurrence for many women, unfortunately making this story still relevant six years after it went viral. Yet there has been change in that span. We’ve seen #MeToo, further discussions about toxic masculinity like this one from men realizing how their behavior was wrong.

We still have work to do, but clearly little boys like James are growing up and doing what Price hoped — calling out other men for toxic behavior. And that’s something to feel hopeful for.