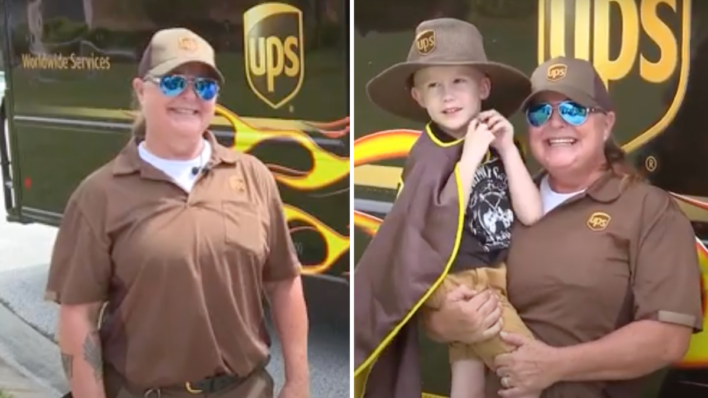 During a time when a 5-year-old boy was stuck at home, a UPS driver delivered – literally.
By Sophie Tolias    September 22, 2022

During a time when a 5-year-old boy was stuck at home, a UPS driver delivered – literally.

On a weekday afternoon you can find five-year-old Brantley Kimbel looking out his window awaiting UPS delivery driver Michelle Dearhart.

“Every time he’d see her, it didn’t matter where I was, he’d see her truck come by, and he’d just scream, ‘Shell is here,’” his mother Leslie Kimbel told ABC Action News.

Over the past few years, Brantley has been confined to the house due to health concerns, undergoing several neurology exams.

“They had to hook things up to his head, and he just had cords everywhere, so it was really frightening,” Kimbel said.

RELATED: UPS Driver Trusts Instinct And Stops To Check On Resident – Ends Up Saving A Life

Dearhart also feels a special bond with Brantley. “It would just become every day I’d get him candy. It made my day, just delivering and stopping here every day. He is the coolest kid I ever met,” Michelle told ABC Action News.

The boy has become so close to the UPS driver he even surprised her on her birthday. “He answered the door with a bouquet of flowers and a bag of Godiva chocolate,” she continued.

So, on Brantley’s birthday, it was Dearhart’s turn to deliver a surprise. “I’m just so happy I got to do this. This is a birthday he’s never going to forget,” she told ABC Action News.

RELATED: UPS Store Owner Realizes Something Is Wrong When 80-Year-Old Tries To Ship A Suspicious Package

She arrived in a special delivery van with flames on the side. Brantley ran out of the house and ran into her arms. She gave him gifts, including a UPS cape and hat, which was just what the little superhero needed.

But the best gift Brantley received that day was a clean bill of health. And he was happy his best friend was there to celebrate with him.

UPS Customers Trick Delivery Driver, Blindfold Her… and Then Do Something Truly Shocking