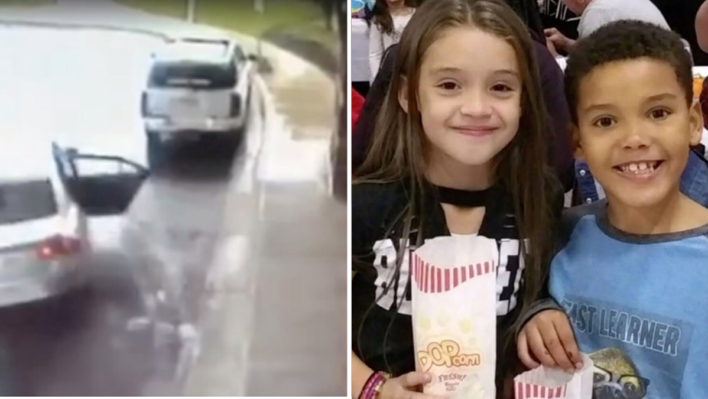 At first, the little boy thought the stranger was a valet.
By Sophie Tolias    November 3, 2022

At first, the little boy thought the stranger was a valet.

Chance Blue and his sister, Skylar Weaver, were in the backseat of the car at Atrium Medical Center waiting for their grandmother when a man hopped into the driver’s seat.

Their grandmother, Nita Coburn, was helping their aunt into the hospital and thought she had locked the doors, but a safety feature kept the vehicle unlocked and 24-year-old Dalvir Singh hopped in and started to drive off.

At first, the boy thought the man was a valet until he started to speed off. But eight-year-old Blue was not going to let a stranger drive off with his 10-year-old sister.

Blue opened the rear passenger’s door, creating enough space for him and his sister to escape from the moving car.

“My brother went to go grab me, opened the door and went out,” Weaver told WCPO. “My brother fell out, but the guy pulled me back in the car.”

Singh had grabbed onto Weaver’s hoodie and she was in the middle of a tug of war between her brother and the stranger.

Blue won, and the brother and sister tumbled out of the car.

At first, their grandmother didn’t think the children had escaped. Their screams caught her attention, and she grabbed hold of the car and hung on until Singh accelerated and she couldn’t keep up.

Good Morning America reported that police said Singh was under the influence of heroin and was at the hospital for treatment. He was charged with two counts of kidnapping, grand theft and felonious assault for dragging Coburn.

The siblings sustained minor injuries and thanked their grandmother for jumping into action. “She would probably die for us. She loves us,” Blue said to Fox 19.

How a Little Boy Proved Anyone Can Be a Hero

Rodney Muterspaw, the police chief, emphasized how incredible Blue’s instincts were for his age.

“He pulled his sister out of the car with no concern for his own safety,” Muterspaw told WCPO. “This little guy is a hero. No question.”

Middletown police officer Connor Kirby, one of the officers who apprehended Singh, echoed his boss.

RELATED: “It Didn’t Look Right” — Woman’s Instincts Kick In When She Spots 4-Year-Old Girl Alone Outside

“While I was speaking to him, I’m looking at him, and it’s just this little kid and he did something extraordinary,” Kirby told WKRC. “It shows how extremely brave he was and how much he loves his sister.”

When Chance got free, he ran inside the hospital to report the carjacking to security, WKRC reported. Singh did not make it far, as police pulled over the stolen car a few miles away.

Even though he’s younger, Weaver knows her hero brother will always have her back.