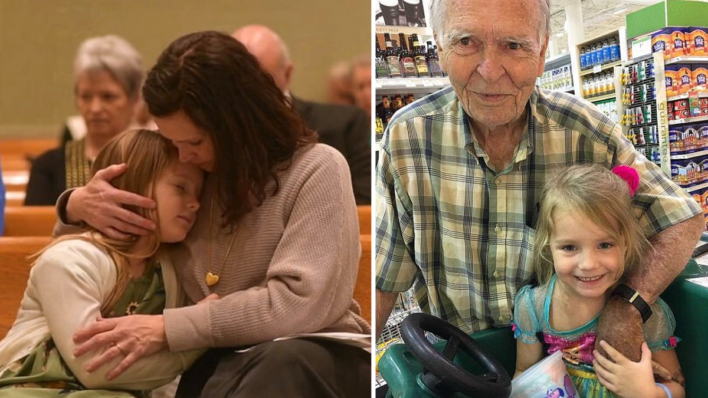 One little girl did not hesitate to make friends with an 82-year-old man after seeing him at a grocery store, changing both their lives forever.
By Lindsey Staub    April 29, 2022

One little girl did not hesitate to make friends with an 82-year-old man after seeing him at a grocery store, changing both their lives forever.

When Norah Wood turned 4-years-old, she accompanied her mother to the grocery store. While she wandered the aisles in Augusta, Georgia with her mom and her sibling, she came across a stranger.

“Hi old person! It’s my birthday!” Norah called to the man, who was later identified as Dan Peterson. But now to Norah, he’s just Mr. Dan.

“As Mr. Dan walked by, she smiled and waved,” Norah’s mother, Tara Wood, explained how the two met. “He stopped in his tracks, smiled, and said, ‘Well hello, little lady! How old are you today?’ They chatted for a couple of minutes, and we went our separate ways.”

A few minutes later, Norah told her mom that she wanted a photo with her new friend, so the family went back through the store to track Mr. Dan down. He was in the bread aisle, about to leave, when Norah found him again.

“They posed together, and then they hugged each other like they were long lost friends,” Tara said.

After they took the photo, Tara and Norah thanked Mr. Dan for his time.

He teared up and said ‘No, thank you. This has been the best day I’ve had in a long time. You’ve made me so happy, Ms. Norah.’

When Mr. Dan thinks back to Norah that day, he describes her as a “light that just lit me up.”

Tara later posted the photo of Mr. Dan and her daughter on Facebook. The post garnered thousands of positive reactions, which is how a friend of Mr. Dan’s found out about the interaction and relayed some more information about Norah’s new friend to her family. Tara found out that Mr. Dan’s wife had recently died, and the photo of him and Norah was the happiest his friend had seen him in a long time.

How a Short Grocery Store Interaction Turned into a Beautiful Friendship

“I got this phone call, and she said, ‘Is this the Dan that talked to the little girl at the grocery store?’” said Mr. Dan. “I said, ‘Are you talking about Norah?’”

Norah didn’t stop there: She wanted to meet Mr. Dan again in person.

“They came by the house, and sure enough, she grabbed me and hugged me like there was no tomorrow,” said Mr. Dan.

Norah even came with a gift.

“Norah brought him a framed picture of the two of them in the grocery store, pictures she colored (he put them on his fridge!) and a bag full of pastries and Butterfingers,” said Wood.

After that initial visit, Norah continues to ask to see her friend. “Norah asks to visit Mr. Dan after school every single day.”

Though not every single day, Norah still visits Mr. Dan. She spent his 82nd birthday with him, and she calls him at least once a week.

Norah has been worried about Mr. Dan being alone. She wanted to know if we could buy him a dog because dogs make everything better.

Because Mr. Dan was not in the place to be able to take care of a dog, Norah got him the next best thing: a stuffed one. But Mr. Dan is just grateful to have met Norah at all. He remembers that day in the grocery store when a little girl’s excitement launched a friendship.

It was one of those days that I’m on my own little private pity party. And I’m feeling sorry for myself and doubting my beliefs and it obviously changed my opinion that day and lifted my spirits to heights that I hadn’t known for a long time.

Following the death of his wife, Mr. Dan struggled immensely. Norah has helped ease a lot of that sadness.

“He said that he hadn’t had an uninterrupted night of sleep for the past several months,” Tara said. “Sadness and anxiety had made his mind wander at night, but since meeting Norah, he has slept soundly every single night. He said she healed him.”

Neither Tara nor Mr. Dan are completely sure why Norah chose to befriend him that day.

“I can only assume there was some divine intervention or stars aligning or she was nudged by the universe,” Tara said. “I know we’re all better because of it, though.”

“Mostly, she just cares about his well-being and his heart,” Tara said. “She wants him to be happy… I guess that’s what friends are supposed to do, huh?”

Mr. Dan will be looking out for Norah as well. “If I didn’t have anything else to do the rest of my life, I have her to love,” Mr. Dan said.

That small gesture of kindness turned into a beautiful friendship. Even without knowing what Mr. Dan was going through, Norah reached out to him. And because of that little act, Mr. Dan’s life has changed for the better.

Reaching out to someone who is lonely can flip their world upside down, the way Mr. Dan’s did because of Norah. And you get to make a new friend. It’s a win-win situation. On February 10, 2020, Mr. Dan passed away, four years after he had run into Norah at the grocery store, eventually changing both their lives forever.

spread love
“Smile at strangers and you just might change a life.” – Steve Maraboli