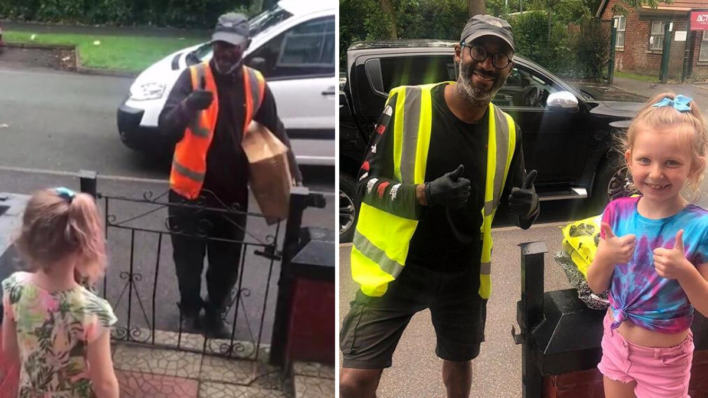 Deaf Delivery Driver Shows Up at 8-Year-Old’s House Every Week – One Day, She Gave Him a Surprise

One 8-year-old girl went as far as learning sign language to communicate with her new friend.
By Sophie Babinski    June 12, 2022

One 8-year-old girl went as far as learning sign language to communicate with her new friend.

Around 2% of the American population is deaf or near deaf, and have reported trouble with hearing even if they are not completely deaf. Because of this, there are many people who rely on sign language to communicate with their loved ones and families.

RELATED: Taco Bell Employee Notices a Customer Struggling to Order Food – Uses a Secret Skill to Save the Day

Those who don’t have a close friend or relative who struggles to hear don’t often go out of their way to learn this universal language. However, one young girl in the U.K. went above and beyond when she found out her favourite delivery driver was deaf — going so far as to learn sign language just to communicate with him!

Throughout the pandemic, Amy Roberts began ordering things online more than ever, causing the delivery van to show up at her house once or twice every week. The driver, who worked for Hermes Parcels, was always the same, a nice man named Tim Joseph. Knowing that he was an essential worker and that essential workers were especially important during this time, Amy’s 8-year-old daughter Tallulah drew him a rainbow picture with the words #thankyou on it.

RELATED: Students Call Deaf Janitor into Classroom – What They Did Next Made Him Break Down in Tears

Touched, Tim taped the photo to the window of his truck for everyone to see. From there, Tallulah and Tim developed a special friendship, greeting each other warmly on delivery mornings. One day, Tallulah gave Tim the ultimate surprise.

We see him one or two times a week. Start of lockdown, Tallulah drew him a #thankyou rainbow. He still has it proudly on show in his van. They have built up quite a friendship over these last few weeks.

The Reason Why a Little Girl Wanted to Learn Sign Language

One day, Tallulah surprised Tim by signing “have a good day” to him after one of his deliveries. Tim was touched by the adorable statement. Tallulah’s mother captured the whole thing on video and shared it, thinking it would help cheer people up during dark times.

The video was shared more than 10,000 times! Many people were touched by the gesture, and commented about how special the interaction was.

RELATED: Deaf Son Brings Mom To Tears By Using His Savings To Secretly Pay Off Her Mortgage

“You are a very special and beautiful little girl Tallulah. He is the best delivery driver we have around here! He’s always so pleased/happy when we sign hello and say ‘thank you’ to him,” one social media user commented.

How a Shared Language Brought Unexpected Happiness in 2 Lives

Tim took the opportunity to teach Tallulah to sign a few more key phrases, which she proceeded to sign back to him on his delivery days. Tim was also amazed and encouraged at the reception Amy’s video received and he hopes that it will encourage more people to learn sign language.

Tallulah realized I was deaf and then one day she surprised me when she signed to me, ‘Have a good day.’ I think she learned sign language at school.

The video of Tallulah and Tim encouraged many of those who saw it to start learning sign language, which made Tim extraordinarily happy. If more people learn the inclusive language, fewer people will feel marginalized and we will all be able to communicate more effectively. We should all take a page from Tallulah’s book and try our best to reach out to the people we see daily.