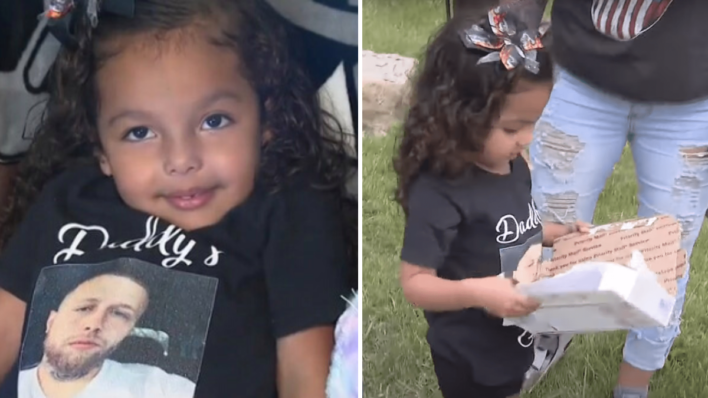 4-Year-Old Sends a Note to Her Dad in Heaven – Days Later, She Receives a Package From Him

Days after Milan sent a note to her dad in heaven, she received a package signed from him.
By Lindsey Staub    June 25, 2022

Days after Milan sent a note to her dad in heaven, she received a package signed from him.

At 4 years old, Milan has never met her father. Before she was even born, her father was killed. Travis Larson died unexpectedly, leaving behind not only his mother, but his unborn child.

“He didn’t just take my son. He took my best friend. He took his daughter’s daddy away,” Tami Avolia said of her son’s killer. “She never got to meet him. A week before, we were celebrating the gender reveal party. He was so excited he was having a little girl.”

Tami helps raise his daughter Milan in his absence, and even though he is not physically there, Tami makes sure her son is still a part of his daughter’s life. That’s why ever year, they celebrate his birthday.

Milan had a special present for her dad this year, a little gift she thought of all on her own. She wanted to gift her dad balloons. She wrote a note, tied it to a helium balloon, and let them go, hoping they would reach her father.

“She wrote a note to him, and I translated it and it says, “Happy birthday, daddy. I love you. I miss you. And I never wanted you to go away. Happy Birthday. Baby girl,’” Tami said.

Only days later, Tami opened her mailbox one day to find a box inside addressed to “baby girl” from “Daddy in heaven.” She immediately began to cry.

Tami brought the box to Milan so they could open it together. Inside was a note, signed from Travis.

“I love your birthday present. Thank you so much. Daddy loves you and Mommy so much and you all. Here’s a present that I made just for you. Hope you like them,” the note read.

How a Complete Stranger Restored a Family’s Faith in Humanity

Tami was told by a postal worker in Fayette County that a woman nearby in Brier Hill had found the note and balloon at her home. Touched by Milan’s love for her father, the woman wanted to do something kind in return. That’s when she decided to respond on “behalf of Daddy in heaven.”

In addition to the note, the woman included three handmade Christmas ornaments.

RELATED: Son Brings Dad To Tears By Revealing He Secretly Paid Off His Mortgage To Retire Him

“They are Christmas tree ornaments, and I am sending you a kiss from heaven. Snowflakes are kisses from heaven. I love you so much. Daddy,” finished the letter.

It was hard for Tami to regain faith in humanity after the death of her son. But through her little granddaughter, and through the generosity exhibited from people like the woman who found the balloon, her belief in the good of people is being restored.