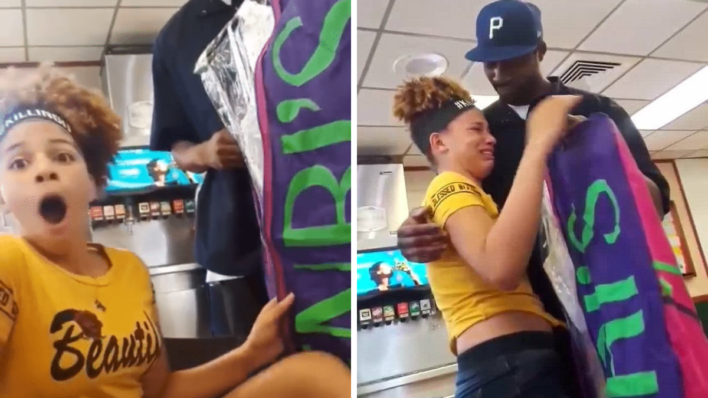 She really wanted the dress but he initially told her they couldn’t afford it.
By Joel Balsam    December 24, 2021

She really wanted the dress but he initially told her they couldn’t afford it.

Despite working three jobs—at McDonald’s, Popeye’s and a Circle K convenience store in Monongahela, Pennsylvania—Ricky Smith struggles to get by.

So he was a bit resistant when his 14-year-old daughter, Nevaeha, asked for a $200 dress to wear to her 8th-grade graduation.

“I said, ‘Mom, dad, I want this dress,'” said Nevaeha, according to Good Morning America. “Is it in our price range?”

“I looked at the price and I was like, ‘Uh, not really sure, but I can see what I can do,'” Ricky recalls saying.

He worked 7 days a week to buy it

Ricky wouldn’t promise his daughter the white top and floral skirt, but he worked hard for it anyway. He took on extra shifts at his three jobs, working as much as seven days a week.

Finally, he managed to buy the dress and Nevaeha’s mom encouraged him to surprise his daughter with it.

“She said, ‘Why don’t you surprise her?'” Ricky told GMA.

So Ricky invited Nevaeha to his workplace and her mom came along to video the big reveal.

“I was working at McDonald’s that day and I put the dress in the back,” Ricky told GMA. “She came and I brought it out and told her that her grandmother bought it for her and I told her, ‘This ain’t the dress you wanted, but I hope you like it.'”

“I was thinking, ‘This is going to be an old lady dress,'” she said.

But it was precisely the dress she asked for. She burst into tears and hugged her dad in a video that has since gone viral.

“To see the look on her face it was priceless,” said Ricky to GMA. “All I can really do was smile.”

“My heart felt like there was more love in it than there was before,” said the 14-year-old about the big reveal.

“I love him and I’m really happy that’s he’s my father.”

The satisfaction of hard work

We can’t always get our kids everything they want. In fact, we shouldn’t, as not always getting what you want is something they need to learn about life.

But when we can, it’s especially sweet to buy our kids gifts because we love them and want to make them happy. And sometimes, because we want to lead by example.

So this story isn’t just about an amazing dad putting a smile on his daughter’s face, it’s also about the importance of working hard and the sense of gratitude that that can bring.