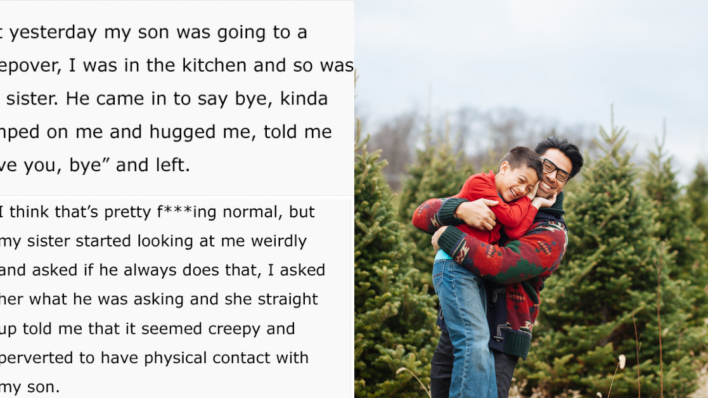 Single Dad Gets Shamed For Hugging Gay Son, Reddit Has The Best Response

A single dad turned to Reddit to get the community’s opinion after he snapped at his sister for accusing him
By Joel Balsam    February 17, 2021

A single dad turned to Reddit to get the community’s opinion after he snapped at his sister for accusing him of being creepy and perverted when he hugged his gay son.

His sister came to visit

A popular subreddit called AITA (Am I The A**hole), received a thought-provoking post recently. It came from user illbreakuo, a 32-year-old single dad of a 16-year-old.

In the post, the father described not having a good relationship with his family after he decided to raise his son on his own. However, he does still talk to his sister — a 42-year-old with a 15-year-old daughter.

“Few weeks ago [my sister] told me that she was really struggling financially and couldn’t pay rent,” the man wrote. “I told her she could stay with me for a bit until she got back on her feet.”

She questioned his parenting style

So the man’s sister moved in, and he immediately noticed a strain in her relationship with her daughter.

“The daughter went straight to where I told her her bedroom would be and didn’t come out for dinner. She’s been acting like that ever since, I don’t know if it’s usual because my sister isn’t paying any attention to her.”

Meanwhile, the sister was “acting snobby” towards the dad and his parenting style.

“She ‘discussed’ more like lectured me on my parenting styles and how ‘no offense’ but it’s really dangerous to let 16 year old go out past 9 pm and have a boyfriend and give him so much freedom while he’s still a kid. I tried my best to ignore it.”

She accused him of being creepy

The day before the post, the man was in the kitchen with his sister when his son came in to say goodbye before going to a sleepover. The son hugged his dad and said “love you, bye” and then left.

“I think that’s pretty f*cking normal, but my sister started looking at me weirdly and asked if he always does that, I asked her what he was asking and she straight up told me that it seemed creepy and perverted to have physical contact with my son.”

At that point, the man lost it.

“I had it up to my neck at that point and I just snapped. I told her that just because her daughter has sh*tty relationship with her and refuses to talk to her doesn’t mean that it’s not normal to have close relationship with their child and she’s actually sick and delusional for even thinking about something like [this].

She got offended of course and went upstairs to her room. We briefly argued after [a] few hours and she basically said that ‘she had good intentions and didn’t mean anything to offend me so much and I should apologize for insulting her and sticking my nose into her and her daughter’s relationship’. We haven’t talked after that and I haven’t apologized to her.”

So, the man took to Reddit to hear what the AITA community had to say.

Despite the sister not weighing in with her side of the story, Reddit had a pretty clear idea of who was in the wrong, or in the site’s lingo, NTA.

mashourmasher: “Just to clarify, your son has a boyfriend, correct? What’s that sound Scoob? Why, nothing but the shrieks of an enraged homophobic family member!”

Crypticedge: “There’s also the expectation of toxic masculinity where any sort of affection shown by a father to a son is an as inappropriate and creepy. She’s a sh*tty sister, that’s for sure.”

raerae6672: “You have a loving and close relationship with your child. At 16 for your son to still be openly affectionate with you is a great thing. You have obviously been a loving parent and your is growing up to be secure in that love. You are doing great. Your sister is disgusting for suggesting otherwise. You were right to call her out.”

9r7g5h: “I’m 27, and whenever I’m visiting my parents, we always hug and kiss and snuggle on the couch. It’s always been this way, and is super normal.”

Love and affection is part of parenting

It’s unclear whether it was homophobia against the teenager, jealousy for the father and son’s relationship, or if she was lashing out because she didn’t want to have to ask for help, but the sister exhibited unquestionably problematic behavior here.

It is fine, and in fact a sign of a positive relationship, if a parent and child express love and affection for each other. Perhaps the sister will take this as a lesson to improve her own relationship with her daughter.