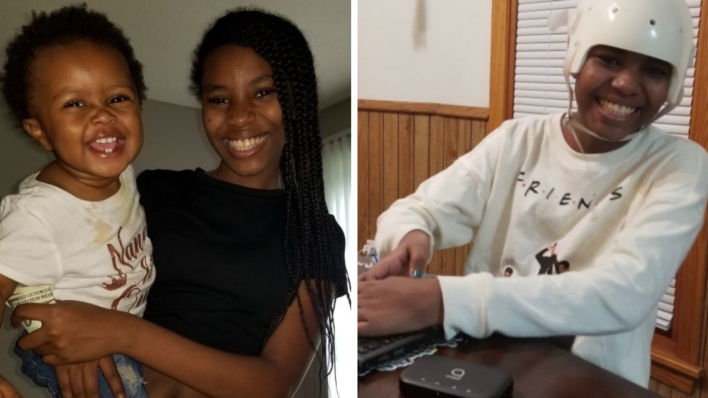 Makayla Saulter took a bullet in the head while protecting her 18-month old niece from a lunatic, but incredibly, she
By Joel Balsam    February 3, 2021

Makayla Saulter took a bullet in the head while protecting her 18-month old niece from a lunatic, but incredibly, she managed to survive with their attacker faces 80 years in jail.

She is a hero

Sisters Makayla, 12 and Canisha Saulter, 29 were loading up a U-Haul to help their aunt move when a white male neighbor came over and started shooting.

“I don’t know if it was racially motivated, but he wanted to kill my family,” said the family’s cousin Anthony Smith to TODAY. “He was standing like 10 feet away, just firing and wouldn’t stop.”

When police arrived, Makayla was found on the ground holding Canisha’s 18-month-old daughter, Winter, who was unbelievably unharmed.

Makayla, however, was rushed to the hospital with a gun would to the head.

“I don’t know what I’d do if my baby was to get hit,” Canisha told Kare11. “But by the grace of God, [Makayla] saved…Makayla is our hero.”

According to WCCO-TV, Jason got into a fight with his wife in the garage because according to him, they weren’t having enough sex. He went into the house to grab his gun, and when his wife told him to shoot her if he was so unhappy, he did. Then he shot her many more times to ensure she was dead.

Then, he directed his fury over to the Saulter family, who he says were not “good neighbors.” He also said “he hated all children.”

Thankfully, the Saulter sisters managed to survive the murderous rampage with the help of a GoFundMe campaign that raised $131,946 for their hospitalizations.

Canisha, the adult sister, was shot in both legs and had to enter physical rehab to learn to walk again.

But Makayla had a much tougher time. She was shot behind her ear and had to have a piece of skull removed for her head to heal properly. Amazingly the procedure worked and Makayla returned home two months after the shooting.

About a month after that, the piece of skull was replaced and on New Year’s day Makayla was photographed smiling with Winter, the baby she risked her life to protect.

It is unfathomable how senseless and evil this rampage was, but as awful as it was, there’s some justice in the fact that Makayla and Canisha managed to survive their injuries. Something out there made sure this lunatic would not win.

Makayla is a hero, plain and simple, and we hope she has a speedy recovery to full strength.