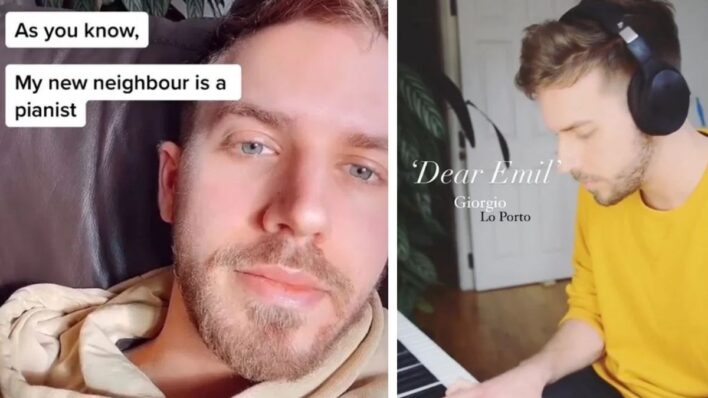 In a story befitting a Hollywood script, two anonymous neighbors connected through music and formed an unusual bond by playing
By Bryan Liquor    April 5, 2021

In a story befitting a Hollywood script, two anonymous neighbors connected through music and formed an unusual bond by playing

In a story befitting a Hollywood script, two anonymous neighbors connected through music and formed an unusual bond by playing piano together through a wall.

While he’s never met his neighbor, he knows a couple of things about them.

“As you know, my new neighbor is a pianist. I’ve never met him/her. But I just love her/his music”

His curiosity sets off a series of Tik-Tok videos chronicling their budding friendship.

Lo Porto then says that he’s left a note telling his neighbor that he loved their music and included a request: Could he play “My Heart Will Go On?”

As music starts playing in the background, he posts “I guess it’s a yes 💙.”

In the next video, we discover that not only does Lo Porto also play the piano, he’s invited his anonymous neighbor to a duet. Although he hasn’t played in a while, it appears that his relationship with his neighbor rekindled his lost passion for the instrument.

In the next video, Lo Porto begins playing “River Flows Through You,” and stops. On cue, his neighbour picks up where he left off.

And just like that, the two struck up a weekly duet “meet up,” as they played back and forth through the wall.

With every note, Lo Porto’s curiosity about his neighbor’s identity increased, until one day he took the leap to meet them.

After much anticipation and thousands of spellbound Tik-Tokers in suspense, Lo Porto revealed that he finally met his melodic neighbour.

“Well, today I have met my neighbour. It was better than expected

His name is Emil…”

We find out from Lo Porto (Emil was too camera shy) that Emil is a 78-year-old native of Poland who recently lost his wife to COVID. He was in between homes as he waited for his house to be sold.

As Lo Porto explained, he played the piano at 2 PM every weekend “because his wife loved it.” Playing it “keeps him closer to his wife and away from the painful reminder” of her absence.

Lo Porto promised Emil that he would continue their duets he moved out.

He also shared a song — the first he ever wrote — inspired by their friendship – titled “Dear Emil.”

“A new friendship started. Two pianos between a wall, not knowing who was playing. But it didn’t matter.”

A moment changes everything

Not long after that post, Lo Porto shared some sad news: Emil had passed away in his sleep.

Lo Porto posted an emotional goodbye to the friend who made a lasting impact.

“You’ll be in my heart. I’ll keep playing, thinking of how powerful music can be. You said I was your light, but you’ve been mine too. Bye, Emil.”

Lo Porto hopes that their bond inspires others to connect with each other.

“My message through the video is—be nice and present even to strangers. They could go through something and need your love. Especially now.”

The last year has radically changed how we interact as humans. Once novelties, Zoom calls, curbside birthdays and waving through windows are now the primary ways we communicate with and understand each other.

However, Lo Porto and Emil’s moving music reminds us that the human spirit always rises above it all.

Reach out to someone, it might be what you both need.