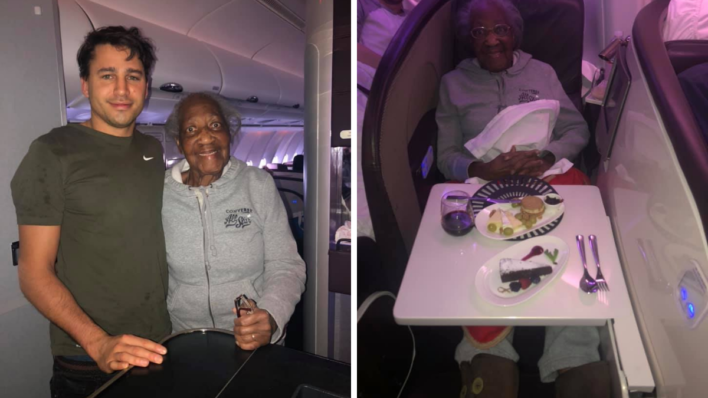 An octogenarian always dreamed of sitting in first class on an airplane, so a kind passenger made her wish come
By Joel Balsam    March 26, 2021

An octogenarian always dreamed of sitting in first class on an airplane, so a kind passenger made her wish come

An octogenarian always dreamed of sitting in first class on an airplane, so a kind passenger made her wish come true.

Back before lockdowns virtually shut down airline travel and made hugging elderly strangers a dangerous activity, an airplane passenger named Jack did a really sweet thing for an 88-year-old lady named Violet.

A Virgin Atlantic flight attendant named Leah Amy recounted the good deed in a Facebook post from December 2019. In it, she said of all the hundreds of flights she’s been on, and of all the movie stars, athletes, and supermodels she’s met, her two favorite passengers were Jack and Violet. “(I wish she was called Vera or Rose,) ” Leah Amy joked.

A simple act of kindness

The flight attendant explained that Jack and his family had booked first class seats on a flight home to New York, but then he met Violet before boarding and decided to give her his seat.

“Jack went and found Violet in economy and swapped seats with her,” Leah Amy wrote. “He then sat on the row of seats directly next to the economy toilets and never made a peep or asked for anything the rest of the flight. No fuss, no attention, literally did it out of the kindness of his own heart, no one asked him too.”

Leah Amy said Violet is an 88-year-old who had been a nurse in the States and the UK. She usually travels to New York to see her daughter, but hadn’t been able to go for a while because of a knee replacement surgery. “Her dream has always been to sit at the front, and Jack made that come true,” the post continues.

“You should of seen her face, when I tucked her in her bed after supper. She said her daughter won’t believe her, and wanted a ‘selfie’ to prove it, but didn’t have a phone or an email address. These photos are getting sent in the post tomorrow, can you even cope?”

Kindness is a gift

Wow, look at the power of a simple act of kindness. While giving up your seat on a plane isn’t something most of us can do right now, there are smaller acts that even if they don’t make someone’s dream come true they can certainly make someone’s day. For instance: sending a letter, telling someone you love them, or volunteering. What simple act of kindness will you do today?