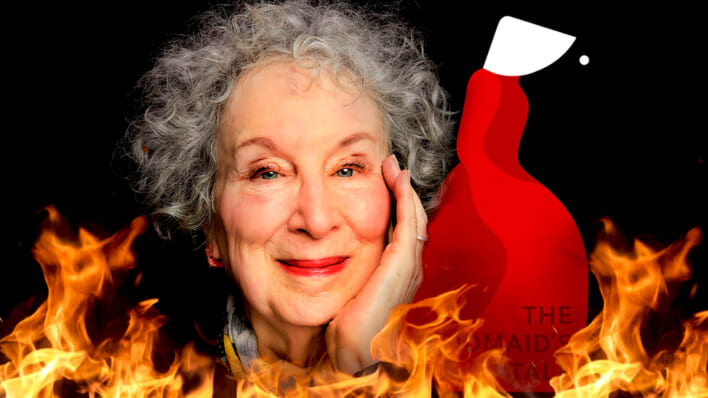 Celebrated Canadian author Margaret Atwood took a flamethrower to a special edition of A Handmaid’s Tale in a pointed protest against literary censorship.
By MJ Kelly    June 10, 2022

Celebrated Canadian author Margaret Atwood took a flamethrower to a special edition of A Handmaid’s Tale in a pointed protest against literary censorship.

In collaboration with her publisher Penguin Random House, Margaret Atwood released a short video that shows the author trying to burn a copy of her own book, because, as the caption on the video reads, “powerful words can never be extinguished.” The author, however, is unsuccessful. And therein lies the point.

To raise awareness about the recent rise of book bans, this copy of her novel, The Handmaid’s Tale, was made fire resistant specially for this display. It was displayed at Sotheby’s New York until the auction ended on June 7, with the $130,000 it earned in proceeds going to PEN America, a non-profit organization that works to defend freedom of expression.

RELATED: Dr. Seuss’ Most Memorable Book Characters – And Ones You Might Want to Forget

Margaret Atwood’s famous dystopian novel has long been one of the most commonly targeted books since 1990 in the United States and has been the subject of controversy all over the world.

“I never thought I’d be trying to burn one of my own books… and failing. The Handmaid’s Tale has been banned many times—sometimes by whole countries, such as Portugal and Spain in the days of Salazar and the Francoists, sometimes by school boards, sometimes by libraries,” said Atwood in an announcement.

“Let’s hope we don’t reach the stage of wholesale book burnings, as in Fahrenheit 451.”

The Handmaid’s Tale’s History with Censorship

The Handmaid’s Tale is an award-winning novel that takes place in the fictional Republic of Gilead, which has overthrown the United States; a place where freedom of choice does not exist and women are oppressed in every imaginable way.

It tells the story of a one-dimensional totalitarian society, where women are denied nearly all of their rights and are forced into roles of servitude defined by the state. They are indoctrinated into conformity and the handmaids’ only purpose is childbearing. The story centers around Offred and everything that’s been taken away from her.

RELATED: 17 Margaret Atwood Quotes to Inspire the Writer in You

Since its publication in 1985, Margaret Atwood’s best-selling work has been adapted into a movie, an opera and a popular HBO series. But, along with its massive success, the classic book has been met with an almost equal amount of controversy over the years, typically due to its “vulgarity” and “sexual content.”

Not one to shy away from controversial issues, Margaret Atwood has become one of the most vocal critics of book censorship, and her work and tenacity continue to inspire book lovers everywhere.

When Rethink creative directors Caroline Friesen and Robbie Percy heard about a list including hundreds of books slated for potential banning in Texas in late 2021, the two wondered if they could create a piece of work that could resist censorship.

“We started looking into it and saw just how many challenges and book bans were happening, and that in some places elected officials were even threatening to burn books,” they said in an interview.

Determined to do something about it, they agreed that crafting an unburnable edition of The Handmaid’s Tale could deliver a powerful message.

“For us, the book is a symbol of the importance of free expression and a reminder of just how important it is to protect stories like The Handmaid’s Tale. Having access to a diverse range of opinions, perspectives and voices is so important for young people and for our society as a whole.”

The Unburnable Book’s cover is made out of a thick black material called Cinefoil and it includes white heat shield foil pages with sections bounded together with nickel wire. There is just no way it can catch on fire, ever.

The Recent Surge in Book Burnings and Censorship, Explained

The attempt to ban literature is hardly a new phenomenon but the drive to challenge books has gained momentum in the United States recently with the American Library Association tracking 729 challenges to library, school and university materials and services last year. Each challenge can include several books and the ALA found 1,597 separate titles were either challenged or removed.

Among those were the 29 books a Kansas school district pulled out of circulation from its libraries last November, including The Handmaid’s Tale and its sequel, The Testaments, but both were quickly returned to bookshelves.

More recently, in early January, a Tennessee school board voted unanimously to ban Maus, a famous graphic novel about the holocaust from an eigth-grade curriculum, citing language and nudity concerns.

Freedom of expression defenders have noted that books by authors of color, books about the LGBTQ community, as well as books about sexual health are threatned the most.

The History of Book Banning Is More Fiery Than You Think

The most challenged, banned and even burned books throughout history are for the most part known as literary classics today. Religious texts, Shakespeare, Aldous Huxley’s Brave New World and even the Harry Potter series have been repeat targets of censorship efforts for various reasons.

Written work banning goes back to ancient times when books were usually burned in order to completely destroy the ideas expressed within them. Possession of banned books throughout history have been regarded as acts of treason and dissent, which were met with penalties such as imprisonment, torture and even death.

Luckily, times have changed and the world has mainly moved away from such archaic forms of punishment, but book censorship is still very much “alive and well,” and intellectual freedom remains under threat. By the same token, censorship opponents such as librarians, authors and publishers continue to fight back and resist in droves.

They believe that book banning, especially from schools, strips young people’ds agency away, depriving them of opportunities to read and learn about themselves and the world around them. Interestingly enough though, book bans usually have the opposite effect and lead to increased sales… which leaves one to wonder: why even bother?

Reading is a gift: it broadens the imagination, entertains us and most important teaches us. The world would be a dull place without books, and the ideas inside them, just like Margaret Atwood’s special edition, cannot be so easily turned to ash… for better or worse.

Who Was the REAL Dr. Seuss – And Is His Legacy Positive… or Problematic?