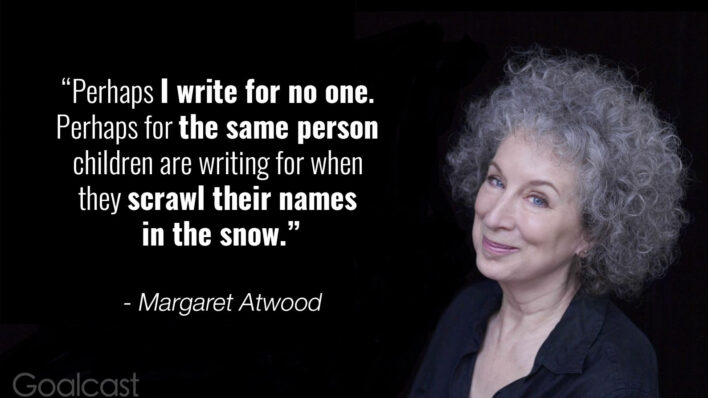 17 Margaret Atwood Quotes to Inspire the Writer in You

Margaret Atwood knew she was going to be a writer since she was 16. She may have never suspected that
By Cyrus    October 11, 2017

Margaret Atwood knew she was going to be a writer since she was 16.

She may have never suspected that her written words will reach millions around the globe. Or that, by 2017, she would author more than thirty-five volumes of poetry, children’s literature, fiction, and nonfiction. But they did.

Nor was she pursuing literary awards. But they came too: Atwood holds honorary degrees from Oxford University, Cambridge University, and the Sorbonne, as well as a Booker Prize (2000), Arthur C. Clarke Award for best Science Fiction (1987), among others.

Her love for writing was also the driving force behind her invention: the LongPen — a robot writing gadget through which you can use your tablet or PC to write in ink anywhere in the world.

Margaret Atwood was determined to pursue her passion: writing.

And now, at a time when the world has turned its eyes to her due to the well-deserved success of her novel-turned-Emmy-winning-TV-series, “The Handmaid’s Tale”, we want to help spread her love for writing — hoping it will inspire all the aspiring writers among you to simply start writing and bring your beautiful stories into the world.

War is what happens when language fails.

All writers learn from the dead. As long as you continue to write, you continue to explore the work of writers who have preceded you; you also feel judged and held to account by them.

The only way you can write the truth is to assume that what you set down will never be read. Not by any other person, and not even by yourself at some later date. Otherwise you begin excusing yourself. You must see the writing as emerging like a long scroll of ink from the index finger of your right hand; you must see your left hand erasing it. Perhaps I write for no one. Perhaps for the same person children are writing for when they scrawl their names in the snow.

Possibly, then, writing has to do with darkness, and a desire or perhaps a compulsion to enter it, and, with luck, to illuminate it, and to bring something back out to the light.

All writers are double, for the simple reason that you can never actually meet the author of the book you have just read. Too much time has elapsed between composition and publication, and the person who wrote the book is now a different person.

If it’s a story I’m telling, then I have control over the ending…
But if it’s a story, even in my head, I must be telling it to someone.
You don’t tell a story only to yourself. There’s always someone else. Even when there is no one.

If I waited for perfection, I would never write a word.

When I was young I believed that ‘nonfiction’ meant ‘true.’ But you read a history written in, say, 1920 and a history of the same events written in 1995 and they’re very different. There may not be one Truth—there may be several truths—but saying that is not to say that reality doesn’t exist.

Paper isn’t important. It’s the words on them that are important.

[Everyone] ‘writes’ in a way; that is, each person has a ‘story’—a personal narrative—which is constantly being replayed, revised, taken apart and put together again. The significant points in this narrative change as a person ages—what may have been tragedy at 20 is seen as comedy or nostalgia at 40.

All writers feel struck by the limitations of language.

Any novel is hopeful in that it presupposes a reader. It is, actually, a hopeful act just to write anything, really, because you’re assuming that someone will be around to [read] it. You’re never going to kill storytelling, because it’s built into the human plan we come with.

In the end, we all become stories.

If these Margaret Atwood quotes about writing and the power of the written word have not inspired you to put your virtual pen to work, here’s some great advice from the author for aspiring writers.