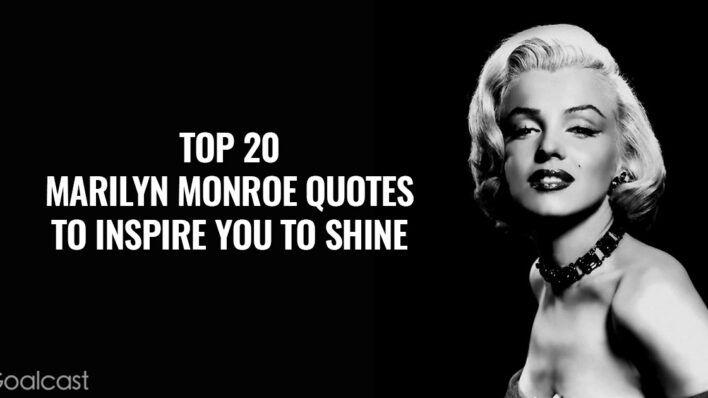 Top 20 Marilyn Monroe Quotes to Inspire You to Shine

Marilyn Monroe, born Norma Jean Mortensen in Los Angeles, California on June 1, 1926, overcame a tumultuous childhood to become one
By Goalcast    May 9, 2017

Marilyn Monroe, born Norma Jean Mortensen in Los Angeles, California on June 1, 1926, overcame a tumultuous childhood to become one of the most celebrated film stars and pop culture icons of the 20th century.

Monroe suffered more than her share of childhood traumas. She was the daughter of a single mother with severe mental health issues, and passed through 12 successive sets of foster parents and an orphanage, as her mother was frequently confined to psychiatric institutions.

She was sexually assaulted on several occasions by her different foster parents, and later said she had been raped when she was only 11 years old. Her first marriage at age 16, which allowed her to escape being sent to another orphanage, was short-lived, and signalled the first of many failed relationships and marriages that would punctuate her life.

Marilyn Monroe had it far from easy, and it’s for that reason that her strength and optimism were all the more inspiring. For Monroe, it seemed like the greater the adversities she faced, the more fiercely determined she became to find the resilient beauty in life, to sparkle in the spotlight as a role model for girls and women, and to chase her ultimate dream of becoming one of the most celebrated actresses of her era.

On her journey from hardship to the summits of American life, Marilyn Monroe starred in 29 films that grossed a combined total of $200 million, studied at the prestigious Actors Studio in New York, founded her own production company in 1955, and basked in the glow of international adulation, as the world in its entirely seemed to fall face forward for her charms.

Marilyn Monroe was a shooting star who left us too soon — but for the time she shone, she shone brighter than any.

Here are our top 20 Marilyn Monroe quotes to inspire you to shine:

Keep smiling, because life is a beautiful thing and there’s so much to smile about.

Imperfection is beauty, madness is genius, and it’s better to be absolutely ridiculous than absolutely boring.

If I’d observed all the rules I’d never have got anywhere.

Just because you fail once doesn’t mean you’re gonna fail at everything.

We are all of us stars, and we deserve to twinkle. To all the girls who think you’re fat because you’re not a size zero. You’re the beautiful one. It’s society who’s ugly.

A career is wonderful, but you can’t curl up with it on a cold night.

When it comes down to it, let them think what they want. If they care enough to bother with what I do, then I’m already better than them anyway.

Sometimes good things fall apart so that better things can fall together. We should all start to live before we get old. Fear is stupid. So are regrets.

Things go wrong so that you appreciate them when they’re right.

Sometimes you just have to throw on a crown and remind them who they’re dealing with.

Always, always, always believe in yourself. Because if you don’t, then who will, sweetie?

Wanting to be someone else is a waste of the person you are. Beneath the makeup and behind the smile I am just a girl who wishes for the world.

How wrong it is for a woman to expect the man to build the world she wants, rather than to create it herself.

I live to succeed, not to please you or anyone else.

One of the best things that ever happened to me is that I’m a woman. That is the way all females should feel.