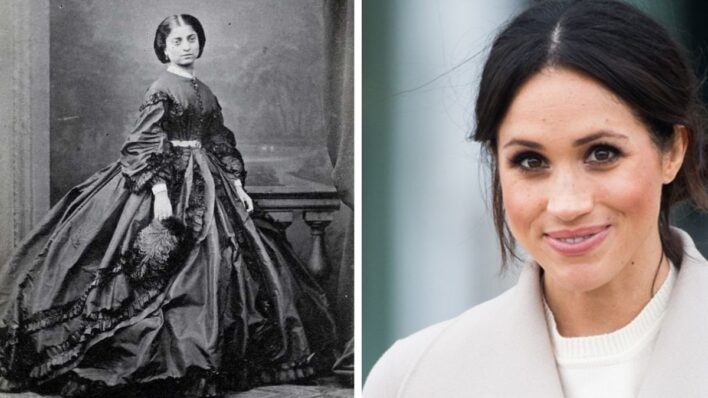 Thanks to the series Bridgerton, many are already familiar with Queen Charlotte, who had Black ancestry. But there was another
By Aly Walansky    March 12, 2021

Thanks to the series Bridgerton, many are already familiar with Queen Charlotte, who had Black ancestry. But there was another

Thanks to the series Bridgerton, many are already familiar with Queen Charlotte, who had Black ancestry. But there was another royal who is less known: Princess Gouramma, Queen Victoria’s god-daughter.

“Princess Gouramma (1841-64) was brought to Britain in 1852 by her father, the deposed Rajah of Coorg. The Rajah campaigned to win back his family wealth from the East India Company, but also asked Victoria to adopt his daughter, believing the Queen would give her a good life (sic),” Atwal wrote.

Princess Gouramma’s father, Rajah of Coorg, actually offered her to the queen in hopes she’d have a good life, which at that point in history for a girl meant raised to secure a good marriage.

However, despite being one of the Queen’s godchildren (she had several), racist attacks were prevalent. And there was another Meghan parallel.

“Their lives were pored over in a newly-emerging popular press,”

Much like with Duchess Meghan, Gouramma was pressured to not honor her own history and culture, but become the perfect English princess. She was part of the Queen’s family – but she was to stay away from her own family. And that was to do with race as well.

They did this to keep her from returning to her “native” ways. Something that sounds abhorrent now – and was then – but also is a parallel to how Meghan has been treated.

“She was moved from foster family to family as her caretakers struggled with the cost and demands of raising a royal ward.”

Much like Duchess Meghan, she struggled a great deal in this new life and actually tried to run away many times. It was just an unbearable level of attention and scrutiny – and prejudice.

“In this I find her parallels with Meghan most intriguing: Gouramma often spoke of dearly wishing for more privacy & living independently – even to become a household maid – so she could be free of scrutiny. Yet her actions were attributed to her ‘innate Oriental weakness (sic),’ Atwal writes.

In her recent interview with Oprah, Duchess Meghan mentioned her own lack of privacy. When Oprah asked about she felt the royal family would react to her sharing these stories, Meghan had responded: “I don’t know how they could expect that after all of this time we would still just be silent if there’s an active role that The Firm is playing in perpetuating falsehoods about us.”

It’s interesting how history truly does repeat itself — even within a single family. But, sometimes, if we take the time to look back, we can learn from it and avoid making the same mistakes again. Perhaps it’s time the British Royal Family took some time to look inward?