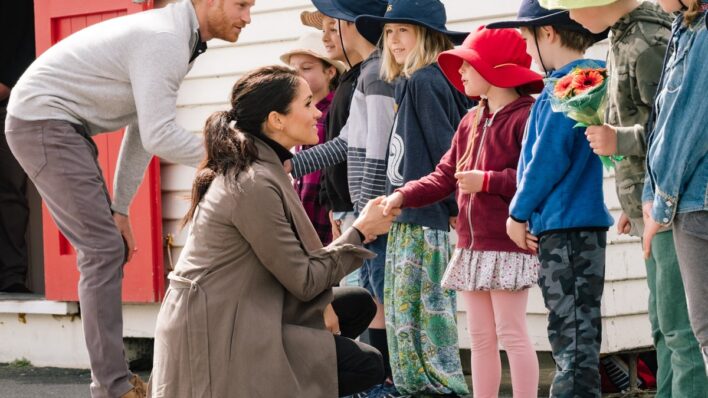 Meghan Markle Shares Cake With Waiting Children in New Zealand, Reminds Us That Kind Gestures Don’t Have to Be Grand

We’ve been watching the royal tour of the Duke and Duchess of Sussex, as they make appearances throughout Australia and

We’ve been watching the royal tour of the Duke and Duchess of Sussex, as they make appearances throughout Australia and

We’ve been watching the royal tour of the Duke and Duchess of Sussex, as they make appearances throughout Australia and New Zealand with Meghan Markle’s growing bump along for the ride — but we can’t get over the constant reminders of what simply awesome human beings they are, aside from being glamorous royals.

Meghan and Harry had just been lunching at a cute café in the Lyall Bay neighbourhood, and as would be expected when royals come to visit, there was a spread of cakes laid out for the royal couple.

Despite eating for two, Meghan made sure to gather a bunch of the cake with her when they left and she handed out the treats to a group of children that had gathered outside to greet the twosome.

Thank you to everyone that came to greet The Duke and Duchess in windy Wellington following their visit to Maranui Café to talk #MentalHealth with young people. #RoyalVisitNZ pic.twitter.com/e7pBvFMe0N

Café owner Bronwyn Kelly told Newstalk ZB that before the royals had visited, she and the restaurant’s chef were going to serve morning tea with “some really delicious yummy little baking treats, which will offer some good local New Zealand products.”

There was seemingly a lot more to enjoy than they could finish, and when Meghan left the café and saw the kids waiting outside, she ran back inside and asked for the cakes that were not eaten to share with the children, according to the Daily Mail. The kids from nearby Houghton Valley School had gathered just outside in hopes of seeing the famous pair, and were delighted to get some cake.

Because they are the sweetest, the duke and duchess also stopped to chat with the children. “They asked us what our names were and also they were really nice and just talked normally to us,” one of the students told TV NZ.

“My legs were shaking so much,” another added.

According to Stuff NZ., one boy was so overwhelmed that he began crying and Meghan came over personally to comfort him.

They are going to be the best parents ever, but they also just seem like really good people to spend time with!