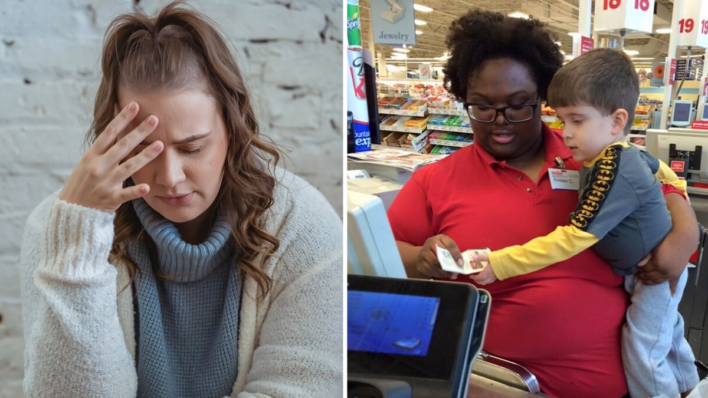 When one cashier caught wind of one mother’s hardship, she rang up a moment that will last a lifetime.
By Bryan Liquor    July 31, 2022

When one cashier caught wind of one mother’s hardship, she rang up a moment that will last a lifetime.

Grocery shopping is such a mundane task that most of us sleepwalk through it. Yet, when one mother and cashier connected, it was anything but ordinary.

Ohio native Kimberly Grandinette was at the local Meijer grocery store with 3-year-old son Paul Jr. While in line, she spent a few minutes chatting with the cashier, 22-year-old Kristen Clark.

RELATED: Cashier Trusts Her Instincts And Rescues Woman From Kidnappers Who Assaulted Her

Grandinette shared with Clark that her infant son was in the hospital, and it’s taken its toll on Paul Jr. to be without his little brother.

What happened next took them both by surprise, for all the best reasons.

The Conversation a Meijer Cashier Had With a Worried Mother

In that moment, little Paul asked if he could help ring up the groceries. “She looked at my son and said ‘certainly’ and brought him behind the register with her,” recalled Grandinette.

That was all the motivation Clark needed, as she brought Paul behind the register. There was little Paul, ringing up the items like a pro. His eyes lit up at the ‘Beep!’ sound of each product being scanned.

Grandinette captured the moment and posted it to Facebook. It quickly went viral, with 174,000 likes, 13,000 shares, and over 6,000 comments. Needless to say, comments were fawning over the caring cashier.

“This woman has a heart of gold and I can see in the picture that she is patient and caring,” wrote one.

“With all the bad things going on, there’s people like this. Makes everything better,” glowed another.

The moment got the attention of Clark’s mother Diane Clark, who was only too proud. “That’s my wonderful daughter, I’m so thankful for her taking the time to make his day because that’s how she is and I’m thankful for you to notice,” Diane said.

Grandinette says that that moment is worth more than any item they scanned. “She made him feel like a million bucks. He skipped out of the store with a smile on his face. Thank you, Kristen, for making my son’s day (and my day!) a bit brighter.”

For Clark, connecting is all part of her process. “I like to get to know people, even if it is just for three minutes,” she said.

RELATED: Cashier Realizes Something Is Wrong When A Customer Tries To Purchase Gift Cards Worth $200

Even so, she couldn’t have expected a magical moment like that. It’s a reminder that the best comfort food can’t be found in the ice cream aisle. Instead, it’s found when two random strangers connect in the checkout aisle and realize how much they have in common.

Among the quotes on kindness, one states that, “Sometimes it only takes one act of kindness and caring to change a person’s life.”

One cashier’s kindness gave a mother and her son resilience during a tough time. What impact will yours have?