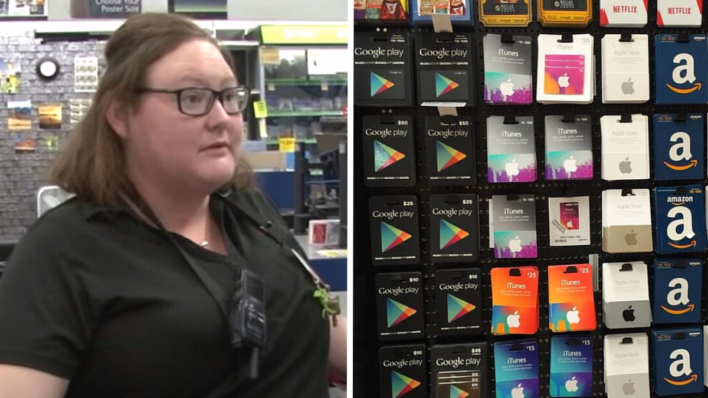 One cashier in Idaho Falls is being celebrated for trusting her instincts when she stopped a customer from falling prey to a scam.
By Sophie Tolias    January 31, 2022

One cashier in Idaho Falls is being celebrated for trusting her instincts when she stopped a customer from falling prey to a scam.

Amy, a cashier at Fred Meyer, noticed a woman walking around the store talking on the phone for a couple of hours without purchasing anything. The woman eventually bought a $45 gift card and Amy didn’t think much about it- maybe the person on the other end of the phone was a kid who was giving specific instructions or maybe the woman was having difficulty finding a gift for someone.

But when she grabbed another set of gift cards worth $200, Amy knew the woman was being scammed.

Amy decided to approach the customer and explain to her that she might be a victim of a scam.

“At first she really didn’t want to believe it. She said that she’d been on the phone with this person for almost three hours,” Amy told East Idaho News. “And it was kind of scary.”

That’s when Amy asked for the woman’s phone and questioned the person, but they wouldn’t give her a straight answer. The scammer went quiet and Amy hung up.

I hung up the phone and then we just talked about what she should look out for in the future.

The woman later told police that the caller had said he was from PayPal and that she had overdrawn her account and had to settle it. He directed her to drive to her nearest store and buy Google Play gift cards to pay that debt over the phone.

In these scams, criminals convince targets that they need to purchase a gift card, or “electronic vouchers,” to pay bills, taxes, or some other financial obligation. The fraudster asks for the information on the back of the card so they can collect the prepaid value. Around 1 in 10 people have fallen victim to gift card scams, according to a survey from AARP, the advocacy group for older Americans.

It was really nice to be able to help her. And she was really appreciative when she was here.

Amy could have just made the sale, but she chose to do the right thing and stopped a scam from taking place, because of which she saved the woman from losing money and becoming another statistic. Don’t be afraid to speak up and help someone when you feel something isn’t right.