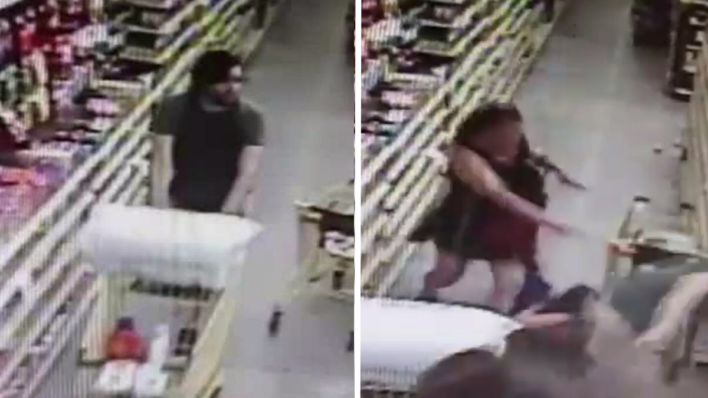 Equipped with motherly instinct, one woman stopped a kidnapper from snatching her princess.
By Bryan Liquor    December 15, 2021

Equipped with motherly instinct, one woman stopped a kidnapper from snatching her princess.

Florida’s everglades are infamous for their swamps of dangerous gators. However, sometimes they also prey close to home.

Predator on the prowl

That’s what one unsuspecting mother found out while shopping at the local Dollar General store in Hernando with her 13-year-old daughter.

Surveillance footage captured a man circling around the aisle, creeping behind her. Suddenly, he grabbed the teen by the shirt, dragging her down the aisle and towards the store exit.

There was no way she would have let the crazed man check out with her daughter.

According to the Citrus County Sheriff’s Office, the woman started chasing him and freed her daughter after a “tug of war.” Then, sacrificing herself, she lay on top of her daughter to prevent the man from dragging her out of the store.

As luck would have it, off-duty sheriff Jonathan Behnen had stopped by Dollar General when he heard the manager making a loud commotion. He yelled, alerting the sheriff that the fleeing man had tried to abduct a girl.

Behnen used his patrol car to block the perpetrator’s vehicle and arrested him. The man, identified as 30-year-old Craig Bonello, was charged with one count each of kidnapping and child abuse.

Thankfully, the woman and her daughter- who both preferred to remain anonymous- were unharmed.

In my 10 years on the road I have never seen anything like this. He truly intended to abduct this child right in front of everyone in the store.

It turns out that Bonello was no stranger to the police. He had been arrested for trespassing at a Walmart store months earlier and has had several other arrests for misdemeanors since 2009, according to court records.

What’s even more chilling is that, when the Citrus County Sheriff’s office posted news of the incident on Facebook, another mother recognized the man as the crazed lunatic who almost kidnapped her own daughter.

“He stocked my daughter in Walmart a few months ago, he asked he if she wanted to have babies. We called the police but he got away,” she wrote.

The suspect’s uncle, Tony Bonello, hopes his nephew gets the help he needs.

“It’s just sad that this has happened, because this is not the kid that grew up with my kids,” he said. “He needs to talk to some psychiatrists and find out what the issue is.”

Sergeant Craig Callahan was quick to praise the heroic mom who had put her life on line to save her daughter.

We’re very fortunate that the mother had the motherly instinct and did what she did. She may have saved her daughter’s life.

Whether it’s under the cover of night or in broad daylight, don’t mess with a mother’s child. Like Bonello found out the hard way, you’ll lose every time.