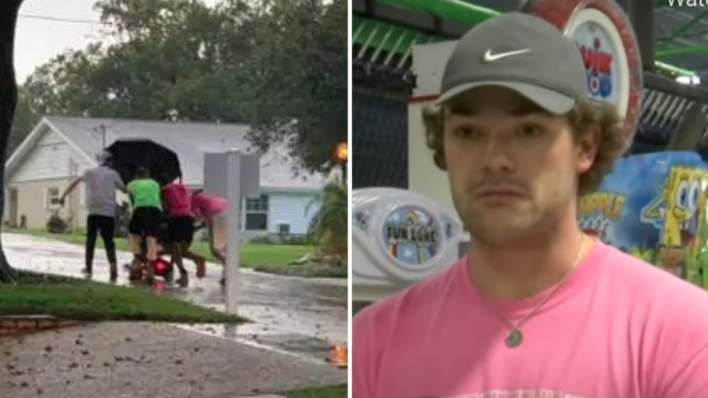 One employee was so moved by what she witnessed, she took photos and shared the act of kindness.
By Sophie Tolias    September 23, 2022

One employee was so moved by what she witnessed, she took photos and shared the act of kindness.

Katty Castro was surprised to hear a commotion in her quiet neighborhood. When she looked, she witnessed a beautiful act of kindness taking place.

“Since this is a very quiet neighborhood, I was surprised to hear a commotion, laughs and four gentlemen pushing one of my lady residents under a heavy storm in Florida…They were pushing her up the big slope toward her residence. These heroes were so focused on helping regardless of the inclement weather and they were even covering her with an umbrella, which showed more compassion on their part,” Castro, a representative at the Florida Living Independent Community, told Fox News.

Why Four Men Helped an Elderly Woman During a Storm

The elderly woman, a resident of the retirement home, had gone out on her scooter to do some grocery shopping. She was returning to home when a storm hit. Then, to make matters worse, her electric scooter broke down.

She was stranded until four young men saw her struggling and got out of their car to help. They pushed the woman and all her items uphill and through the storm for a three-quarter-mile trek back to her residence.

RELATED: Stranger Pays for Struggling Elderly Man’s McDonald’s Meal – Then, He Takes Something Out of His Pocket

Castro went to thank the men for their kindness and asked them for a group picture. She later shared the moment on Nextdoor — a hyperlocal social networking app where people share what’s going on in their neighborhood.

Castro initially thought they were teens from the high school next door, but she later learned the men were employees of Rebounderz Adventure Parks.

The men were passing through the area after work and noticed the woman as they were about to turn onto an eight-lane highway.

How 4 Strangers Proved the Importance of Helping Your Neighbors

“We were tired, dirty and wanted to get back to the hotel; but, knew without a doubt that regardless of our long day, it certainly wasn’t worse than the day this lady was having. She literally had a plastic bag on her head to keep her hair dry. We knew we couldn’t leave her in the rain, in the middle of the road, frantically trying to get her scooter to work again,” Massa continued.

Regarding the viral attention they’re receiving, Massa said he and his colleagues never expected it and hope that people feel encouraged to help their neighbors when duty calls.

RELATED: Elderly Woman Loses Husband and Her House in the Same Day – Her Neighbor’s Response Surprises Her

“We just wanted her to get home safely. We never expected recognition, just helping a fellow member of our community. Holding a door, smiling, picking up someone’s spilled groceries, reaching for an item on the top shelf in the grocery store; and, yes, helping someone whose electric wheelchair broke down in the rain are things almost anyone can do,” he said to Fox News.

Castro also hopes this moment inspires others to step up when needed. “As a mom of teenagers, I want my children to grow up like these ‘modern heroes,’ to make a difference each day no matter the environment,” she said.