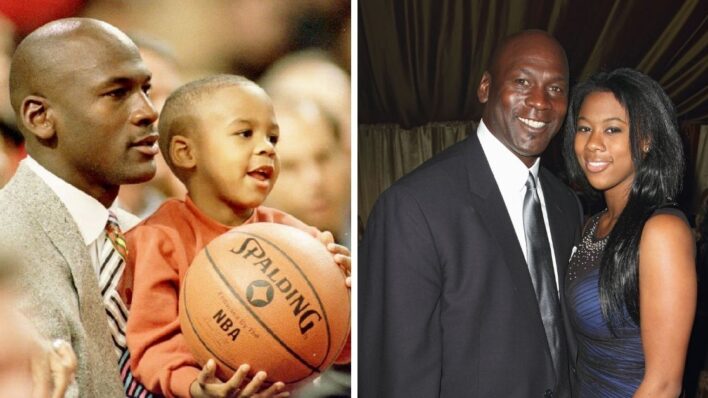 Basketball legend Michael Jordan is a source of inspiration for millions, yet the situation isn’t the same with his own children.
By Shaoni Das    January 20, 2021

Basketball legend Michael Jordan is a source of inspiration for millions, yet the situation isn’t the same with his own children.

Basketball legend Michael Jordan may be a source of inspiration for millions of youth across the world, yet the situation isn’t the same with his own children. His children likely grew up under an exceeding amount of pressure, the kind of pressure that most boys can’t even conceive of in their whole lifetime.

Yes, it’s a life of privilege and fame, but it’s also a life packed with expectations, of needing to match or compete with your father’s outstanding records on the court, of feeling like you have to do something extraordinary with your life to become your own person, to escape the shadow of your own father.

You’d think that Michael’s terrific attributes as an athlete would undoubtedly translate to fatherhood, but over the years, his children realized that their father isn’t anything like what most people see on their screens. Ultimately, the dynamic between MJ and his children is between them and no one else. The public can make assumptions based on their own perceptions of Michael, but it’s up to the kids to evaluate the kind of father he’s been in their lives.

As it turns out, Michael’s parenting style didn’t quite reflect his personality on the court, but it demonstrated its value in other ways. Therefore, it’s time to chronicle his children’s lives and examine him as a father, not a basketball player.

Michael Jordan has five children from two different relationships. His marriage to Juanita Vanoy produced two sons and a daughter: Jeffrey, Marcus, and Jasmine. Michael and Juanita continued to have an up and down marriage over the years — they filed for divorce on January 4, 2002, but managed to reconcile with each other.

However, their reunion didn’t last, and they filed for divorce again. The divorce was finalized four years later, on December 26, 2006. Michael tied the knot once again after seven years on April 27, 2013, with Cuban-American model Yvette Prieto. The two welcomed twin daughters, Victoria and Ysabel, a year later.

Given that their dad is the most acclaimed basketball player and athlete in the world, Michael’s two boys did try their hand at the sport on a high school and college level. When the boys were in high school, they were some of the most high-profile players at their age.

Jeffrey Jordan had some of his school games televised nationally at ESPN, a rare showcase for the time. Though his play received some buzz, Jeffery wasn’t recruited by any prestigious basketball-oriented university. He gained admission into the University of Illinois’s basketball program as a “walk-on,” which means he didn’t experience serious interest from scouts or elite sports programs but was instead admitted to continue the family tradition. Jeffrey left the university’s basketball team to focus on school and “life after basketball.” He later transferred to the University of Central Florida’s basketball team but left it as well due to “personal reasons.”

Jeffrey’s younger brother, Marcus, achieved relatively more success as a college basketball player — his University of Central Florida team defeated many local rivals and broke quite a few records. Ultimately, Marcus also decided basketball wasn’t in his cards, and therefore, he also set out to carve his own path.

At present day, Jeffrey lives in Portland, Oregon, and now heads digital brand innovation for the Jordan Brand. He married Radhina Aneva in 2019. Marcus, on the other hand, runs an online shoe store called ‘Trophy Room.’

Michael Jordan’s daughter, Jasmine, may not have given professional basketball a go, but she did study sports management at the University of Syracuse. Currently, she works for the Jordan brand and even has a baby from a relationship with a basketball player, Hakeem Christmas. It’s evident that basketball plays a huge role in the Jordan family, no matter what.

In 2007, right before his son Jeffrey was set to debut as a freshman in a college football game, Michael opened up about fatherhood in an interview with TODAY. He said that while the rest of the world may place an excessive amount of pressure on his son, he wants nothing but the best for Jeffrey.

I want him to be his own person, you know? I want him to enjoy his life, whatever he chooses to be that, you know?  If you play basketball, you’re a doctor, you’re a lawyer, whatever, I’m gonna support you with the love and every effort, every inch of my body.

In an interview conducted last year, Jeffrey said that while his dad was far from demanding or harsh at home, he still encouraged them to work as hard as possible and follow perfectionism wherever possible.

Michael wasn’t the helicopter dad that everyone had imagined: he traveled a lot and didn’t have time to coach his young children. The young sons had to learn basketball themselves, and on the rare occasion they trained with their dad, they were always astounded by their father’s strength and determination.

Michael also cautioned his sons on pursuing basketball too intensely too early. For example, when Iowa State contacted Jeffrey, Michael said no because he didn’t want his son to “get committed at an early age.” He wanted his sons to take it easy and cherish each moment as it occurred.

One of the biggest misconceptions was that he couldn’t turn that [competitiveness] off. He definitely could turn it off and be a dad … But when it was on, it was on.

What’s lovely is that Michael himself is aware of the stress weighing down on his kids. He even acknowledged it in his Hall of Fame induction speech in 2009, when he told his adult children, “You guys have a heavy burden. I wouldn’t want to be you guys if I had to.”

Being your own person is what matters to your parents

Michael’s demanding, dominant, and painstakingly perfectionist nature may have pushed him all the way to the top of the success ladder, but it doesn’t mean that he’s going to expect his offspring to be the same. He nurtured them with unconditional love and support and encouraged them to work hard and forge their way, however they wanted to.

Once he realized that basketball wasn’t for them, he didn’t criticize or rebuke them. Michael knew that his kids needed to figure out their lives first before undertaking any serious career. His gentle, respectful, and nurturing style of fatherhood stands in broad contrast to his most resilient qualities as an athlete.

The core lesson that can be taken away from Michael’s dynamic with his children is that you don’t have to follow your parents’ path to show your love for them. You can be your own person and still deserve their love. You can follow your own dreams and still respect their achievements and lessons. This life belongs to you, and your parents are only along for the ride.